Zab Paschke, a prophetic voice on youtube has two prophetic dreams she shares in a recent video. The first dream reveals something about Hillary.  She dreams of Hillary, and something is exposed of Hillary that nobody expects.  In fact, its the last thing everyone has suspected.

She is told twice in the dream about Hillary being pregnant.  Now in this dream, the pregnancy isn’t a natural pregnancy, but a build up to an event that will be exposed.

Pregnancy dreams can often symbolize something that is growing and developing.  Sometimes they can represent the birth of a new idea, direction, project or goal.

Zab draws the conclusion in her dream that Hillary is sitting on a BIG secret.  Could it be that this secret is going to be exposed soon?

In the next dream she sees an imposter who looks like Putin who has a mask on.  The real Vladimir Putin sees this, and is furious.  Zab draws the conclusion the person in the costume was Obama.  She then looks off to the side and sees a group of people who are in a holding position with war face paint ready to attack.  These people are not in Russia, but in America.

She draws the conclusion that these people who are in a holding position are the immigrants who are being let in and that we are not paying attention to.

Although, a thought I had was….  could these people be the extremists that are waiting for the right TIMING to let go on their bombs and terrorist attacks?  I cannot help to think of Michael Boldea jr’s prophetic dream of Terrorists hiding and ready to go in our country.

It seems in the last week I have stumbled upon several prophetic warnings that also see a terrorist attack coming, which can be seen below.

In Zab’s dream, Putin feels as though the truth is not being told.

Could it be that Russia is being blamed for something that is being set up by our own gvt, and later blamed on Russia?

Think back to Glenda Jackson’s video where she sees Obama in the white house wanting to stay in office, calling it his destiny….and then the people who are in the office discussing these things said something to the effect of “we know how to stir things up”

Zab draws the conclusion that Obama is behind the scenes, engineering events, but we cannot see his involvement.

We are being distracted is her message.

While I am a new subscriber to both Zab Paschke‘s and Shannon Johnson‘s youtube channel, I cannot help to see the same message being shared.

Prophetic voice Shannon Johnson also seems to draw the conclusion in one of his most recent videos that we are being set up, and the person behind the mask is Obama.  In a dream from March earlier this year Shannon sees Obama yelling curse words yelling at Benjamin Netanyahu.  In the comments section of the video he makes a note that where Netanyahu is standing is the temple mount.  In the dream, Obama unzips his body and something that was not human is exposed.  The wrath of this entity or spirit was getting ready to be poured out on the children of Israel.  It wasn’t Obama, but the figure that came out of the suit.

Michael has also been warning that this time period between when the election takes place….(the call of the new president and the time Obama leaves the White house is a red alert that the land of Israel could be divided.

There is a lot more going behind the scenes than we realize, and a false flag maybe something that influences the elections in the months going ahead.  While a winner is called, events can also take place while Obama is still an acting president.  It seems like many of us are trying to make sense of the mess of the elections that we are currently seeing going on.

“She is sitting on top of a BIG secret”

“It would be the last thing people would suspect.

“Something was told to me twice in a dream. When the Lord does that, He is getting my attention.  First to make sure I remember it, and second to confirm it”

“I think we are being played”

“I think this was planned all along, this whole scheme that her and Obama have been playing”

IT SEEMS LIKE OBAMA IS SETTING UP HILLARY CLINTON & DONALD TRUMP!!!

Barack Obama believes FBI Director James Comey is a man of integrity and is not trying to influence the U.S. presidential election by announcing scrutiny of additional emails linked to Democrat Hillary Clinton’s private server, the White House said on Monday.

Elaine Howard I was thinking the same thing, this whole election is nothing but a theatrical planned show!!!

Putin puts out the warning countless times to the American people.

“An event will occur that will begin World War 3 (without debate) and there is to be no stopping it.  All the planning and scheming has led to this.  Many will lose their lives.

It is important that you rest in the shadow of the Almighty, your refuge and your strength.  I come to you to harken you to listen to all that I have to say.  The underpinnings of this attack come not from afar but from your own shores.  Do not be deceived.

Trust this good word:  I desire My children to live in light just as I am light.  See, the darkness covers the earth, yet their are pockets of light that shine forth through the darkness.  The abyss has not conquered all.  It is My children of light who shall be victorious.  Let no more false flags confound you.  They say “look here” while over there great tragedy really takes place.  I will point you to the truth.  I will point My children to all truth, which is in Me.

Look to Miami.  Look to Chicago.  Look to San Francisco.  See what is happening.  The wheels have been set in motion and they shall not be stopped.”

Go to Info wars to enlarge the graphic 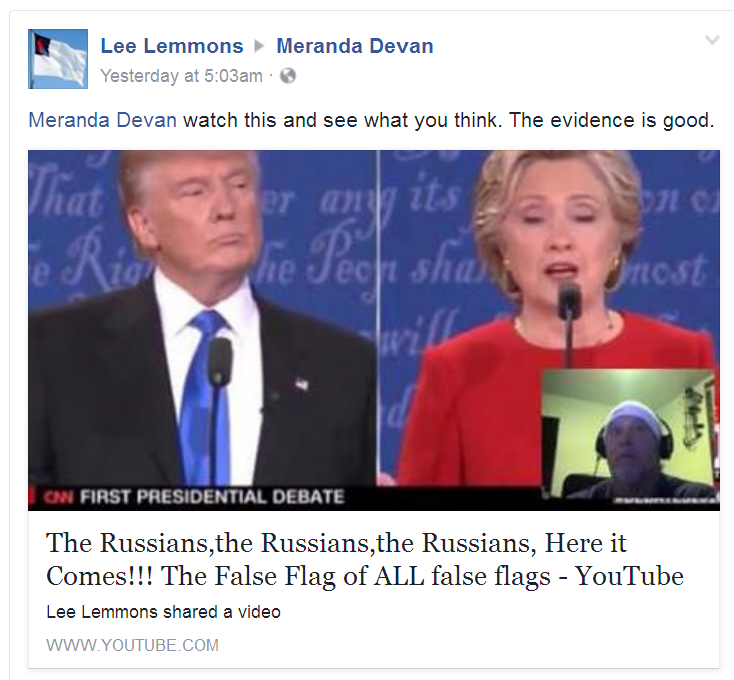 Could we soon be something pinned on Russia?

Russia has been mentioned everywhere in mainstream news.  Hillary is sure pinning a lot of blame on Russia.

“It came fast, without any warning, and it only took down ONE city. It was not anywhere else in America.I was not given the name of the city or state, but the aftermath, oh the after math, was very detailed. It was so terrible, the people were laying on the ground, the city was completely in ruin. I will not go into graphic details. The devastation was just too horrible for words.”

“When this sudden event comes and many die, people who thought they were saved will be found in everlasting torment, where there is no ending. Events and judgments are coming upon this land, with greater magnitude. The next major event will involve the destruction of a city. From there on, I will allow whole cities, and parts of cities to be taken out in the wrath of my judgment.

Tell My people this, ‘If you are not right with Me today, and you perish, you will not have a second chance to get right with me. Your punishment will be everlasting.’

Time is short, many of you mock My prophets and watchmen. But soon, I will silence your mouth permanently.

What is this you say? ‘These things are not coming. I have more time. The American military will save me and so will a President?’”

Thus says the Lord, “As surely as I live, no military, no president, or human can save you. My son Jesus is the savior for the whole world. For you say, it’s not coming, but the Lord says it shall surely come, and you will get a double portion of My wrath for mocking My prophets and watchmen.”

“The Lord said to me on 6th May 2012, “The fall of Babylon approaches and this is a city followed by a nation. New York City will be destroyed in a single hour.  “

An Asteroid Hitting At The Same Time Hillary Receives Her “Crown” .- see here

Dear Prophetic Friends,
If you read my latest news letter from a few days ago, I just received another confirmation that something big and horrible will happen before the election. read and pray about it.

(I believe this is someone writing John Shorey)

Shalom, I’m sharing this with you because I feel I need to. Please please seek Abba for his truth. Please let me know if you have any confirmation or word.

Sunday night October 30 when I went to sleep late at night I could not rest. I kept waking up and I sensed that Abba wanted me to pray. My heart was heavy and burdened and all I kept thinking it was what is coming and specifically of the city of Chicago. I do have a son and daughter-in-law that live in Chicago. I also was given the date November 4th over week ago. All Abba said to me was “it all begins on November 4.” I know a few others that have also received this date. So with that in mind, Sunday night I was just restless in my body and my spirit. So I went to my knees and began to pray in the spirit and I instantly felt peace while I was praying.

I got up and want to search the Internet to find more details about Timothy McVeigh. I didn’t know if he was alive or dead. But I knew he was associated with the bombing in Oklahoma many years ago. I will attach a link of the report that Abba led me to. (The first half I feel is most relevant.) http://www.greatdreams.com/ mcveigh-patsy.htm

I believe the Holy Spirit is impressing upon me is that there will be an attack in the way of a bombing. And it will be done by our own people. Others will be blamed. I don’t know if it will be nuclear or otherwise.

But I just felt I needed to share and ask you to pray about this please. Please share with me if you have any word from Yahweh.

I appreciate you. I pray for you. Stay Strong and Courageous.
Shalom Shalom,
Dawnette 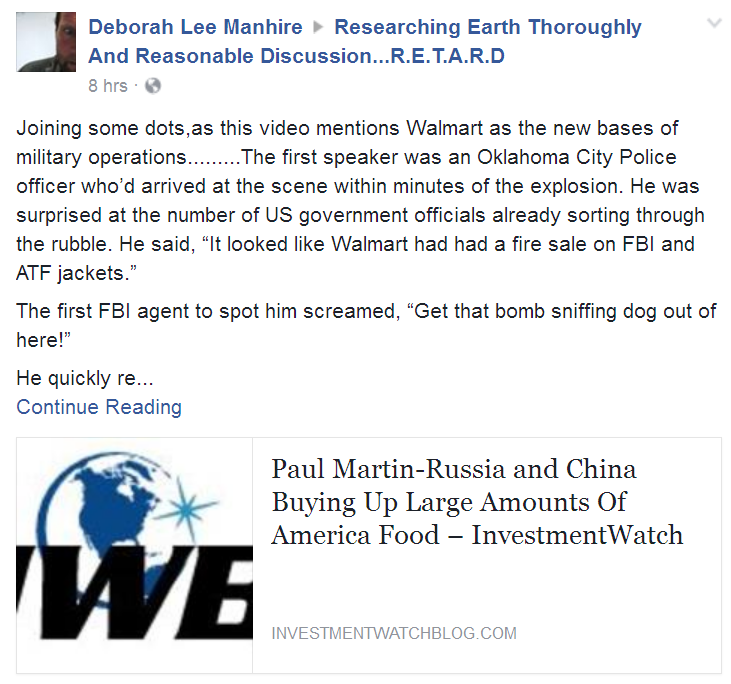 “I had the Lord telling me, NYC must be speedily evacuated, because NYC is facing a threat that is massive and a very high...