If you reside on the west coast, you are living on borrowed time.  As you will see below, stress has been building up along the San Andreas fault for more than a century, and scientists tell us that southern California is way overdue for a major earthquake.  When that stress is finally released, the U.S. Geological Survey says that we could be looking at hundreds of billions of dollars in damage.  If you follow my work regularly, then you already know that there has been unusual shaking all along the “Ring of Fire” so far in 2016.  But thankfully the west coast of the United States has been spared from a major disaster up to this point.  Unfortunately, scientists assure us that it is only a matter of time before one strikes, and that is why it is so alarming that the ground surrounding the San Andreas fault has been “rising and sinking”.  The following comes from the Los Angeles Times…

For the first time, scientists have produced a computer image showing huge sections of California rising and sinking around the San Andreas fault.

The vertical movement is the result of seismic strain that will be ultimately released in a large earthquake.

The California coastline is where two enormous tectonic plates come together.  The Pacific plate and the North American plate are slowly but surely moving against one another, and this creates a tremendous amount of geological stress.  While areas on both sides of the San Andreas fault have been steadily rising and sinking as a result of this stress, there are sections of the fault itself that have remained “locked” for more than 100 years, and other sections that have remained locked for more than 300 years…

The region of the San Andreas fault between Monterey County and Imperial County hasn’t moved in a significant way in more than 150 years, and other parts of the fault have been accumulating stress for more than 300 years.

This build up of stress is extremely dangerous, because the more stress that builds up the worse the ultimate release of that stress could turn out to be.

If you look at this map from the U.S. Geological Survey, you can see all of the earthquakes of magnitude 2.5 or greater that have hit California within the past seven days.  As you can see, there has been a whole lot of shaking going on…

And let us not forget that earlier this month a magnitude 5.2 earthquake struck near San Diego, and it was followed by more than 800 aftershocks.

Unfortunately, none of these quakes has relieved the stress along the San Andreas fault.  While the San Andreas fault may be the most famous of the faults in southern California, the truth is that there are many others.  And just last year the U.S. Geological Survey admitted that the probability of a “megaquake” along the west coast involving multiple faults at once was significantly greater than they had previously been projecting…

A recent report by the U.S. Geological Survey shows the inevitability of just such a quake, which is predicted to hit within the next couple of decades.

“The new likelihoods are due to the inclusion of possible multi-fault ruptures, where earthquakes are no longer confined to separate, individual faults, but can occasionally rupture multiple faults simultaneously,” lead author of the study and USGS scientist, Ned Field says. “This is a significant advancement in terms of representing a broader range of earthquakes throughout California’s complex fault system.”

But of course the San Andreas fault represents an absolutely massive threat to southern California all by itself.

Back in May, the Los Angeles Times quoted the director of the Southern California Earthquake Center as saying that the San Andreas fault is “locked, loaded and ready to roll”…

“The springs on the San Andreas system have been wound very, very tight. And the southern San Andreas fault, in particular, looks like it’s locked, loaded and ready to go,” Jordan said in the opening keynote talk.

Other sections of the San Andreas fault also are far overdue for a big quake. Further southeast of the Cajon Pass, such as in San Bernardino County, the fault has not moved substantially since an earthquake in 1812, and further southeast toward the Salton Sea, it has been relatively quiet since about 1680 to 1690.

Here’s the problem: Scientists have observed that based on the movement of tectonic plates, with the Pacific plate moving northwest of the North American plate, earthquakes should be relieving about 16 feet of accumulated plate movement every 100 years. Yet the San Andreas has not relieved stress that has been building up for more than a century.

A number of years ago, a study conducted by the U.S. Geological Survey found that just a magnitude 7.8 earthquake along the southern San Andreas fault would cause more than 1,800 deaths, 50,000 injuries and 200 billion dollars in damage.

So what would a magnitude 8 or worse quake do?

And even though the U.S. Geological Survey does not believe that parts of California will eventually fall into the ocean, it is very open about the fact that Los Angeles and San Francisco will one day “be adjacent to one another” as the Pacific plate and the North American plate slowly slip past each other…

Will California eventually fall into the ocean?

No. The San Andreas Fault System, which crosses California from the Salton Sea in the south to Cape Mendocino in the north, is the boundary between the Pacific Plate and North American Plate. The Pacific Plate is moving northwest with respect to the North American Plate at approximately 46 millimeters per year (the rate your fingernails grow). The strike-slip earthquakes on the San Andreas Fault are a result of this plate motion. The plates are moving horizontally past one another, so California is not going to fall into the ocean. However, Los Angeles and San Francisco will one day be adjacent to one another!

Meanwhile, while we are talking about southern California, I just had to mention the record-breaking heatwave and the horrific wildfires that are plaguing the region this week.  In fact, two massive wildfires that have been raging out of control threaten to combine “into one super fire”…

The most serious of these fires have been week-old blazes in California, New Mexico and Arizona, where scorching triple-digit temperatures have stoked the flames.

Normally we don’t see wildfires of this size and intensity until the late summer or early fall.

As I constantly remind my readers, last year was the worst year for wildfires in all of U.S. history, and so far this year we are more than a million acres ahead of the pace that was set last year.

We live at a time when our planet is becoming increasingly unstable.  Earthquakes, volcanic eruptions, wildfires, historic droughts and unusual flooding events all seem to be on the rise globally.

So is there a reason why all of this is happening, or are we just going through a time when we are experiencing an astounding string of truly bizarre coincidences?

Check out Michaels hour talk at Morningside about dreams and visions.  Michael talks about John Paul Jacksons prophecies,…and updates us on which ones have already come to pass.  View the video here on facebook

The map (featured in the article) comes from the USGS, and it shows all of the earthquakes of magnitude 2.5 or greater that have hit the western portion of the United States over the last week. The three big earthquakes that struck southwestern Montana are visible on the map, although they are hard to see because the dots all overlap. But the main reason why I am showing you this map is because I want you to see all of the earthquakes that have been happening along the major fault lines in southern California in recent days…

(The picture featured here is from the Smithsonian Channel. In their documentary on Yellowstone called “Why the Yellowstone Supervolcano Could Be Huge ” Find it on youtube) 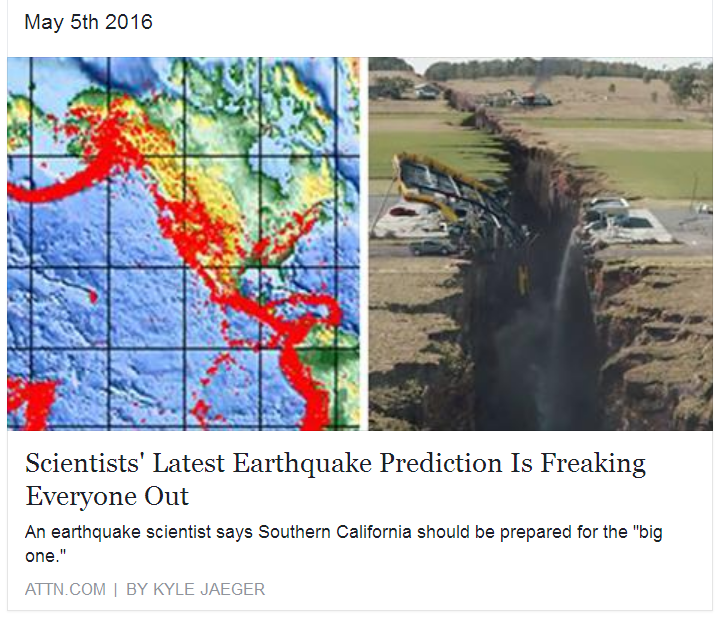 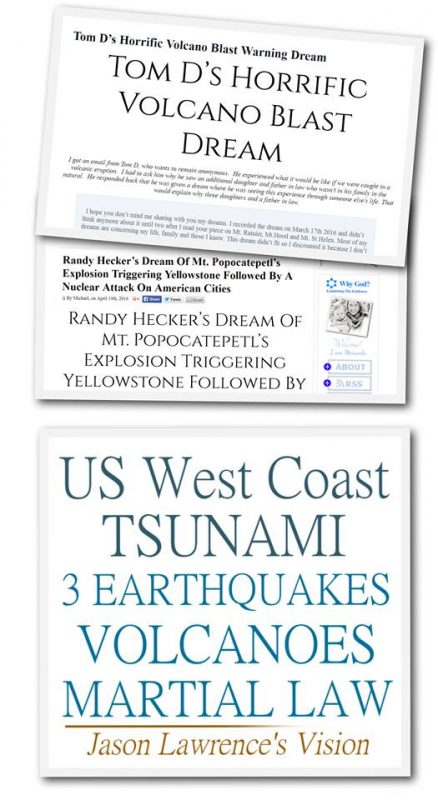 Could we see a volcano blast soon? What do you think?

Jason Lawrence Sees AN OPEN VISION where A Series Of Volcano Blasts, A Tsunami And Martial Law Come To The West Coast Read about that here http://bit.ly/1Ue8RJS

Randy Hecker’s had a dream of Of Mt. Popocatepetl’s Explosion Triggering Yellowstone Followed By A Nuclear Attack On American Cities See that here http://bit.ly/1TEYlvo

What do you think? Does God give his people warning visions and dreams? 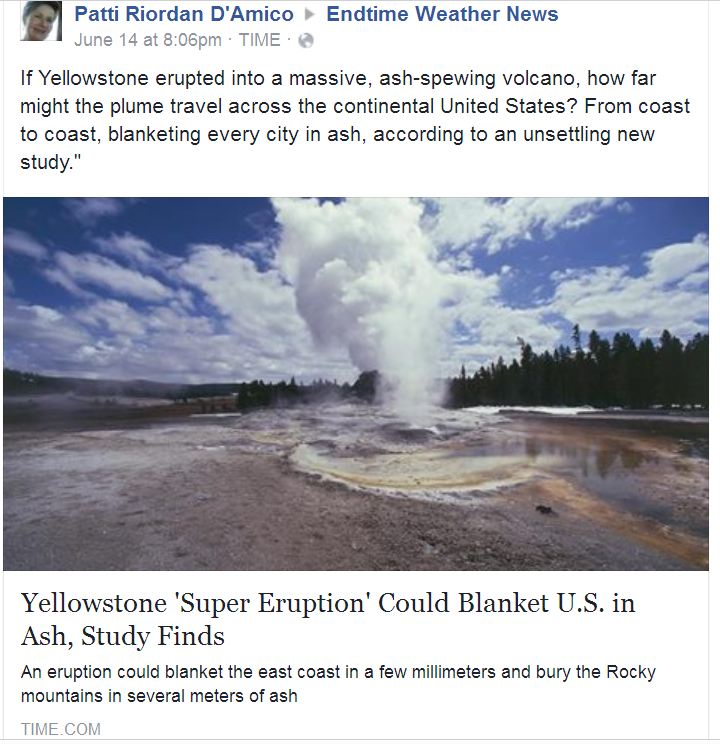 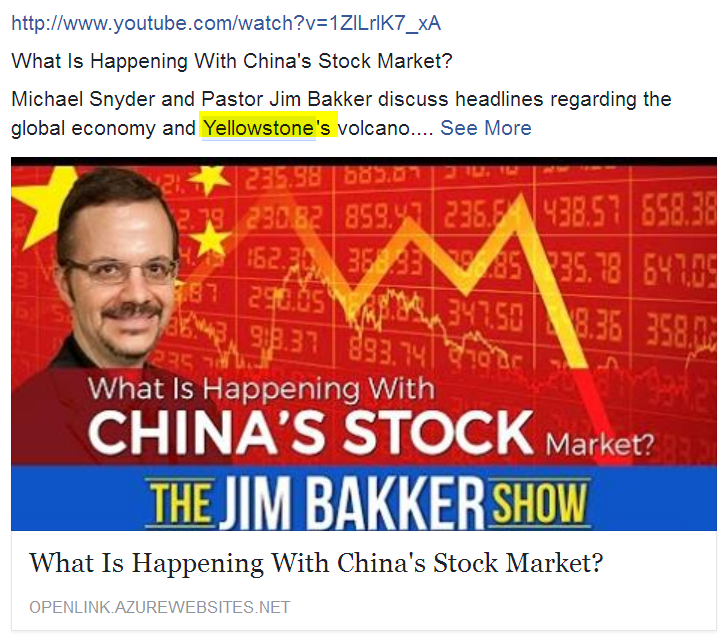 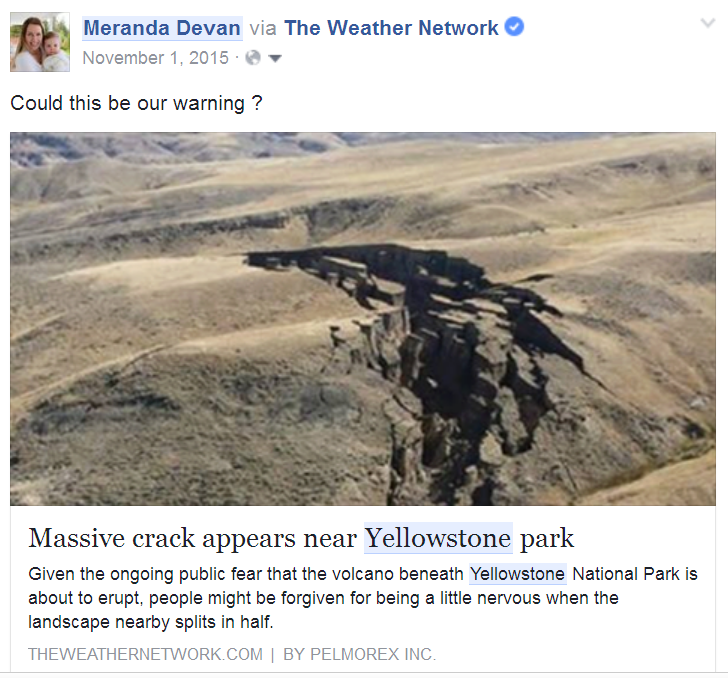 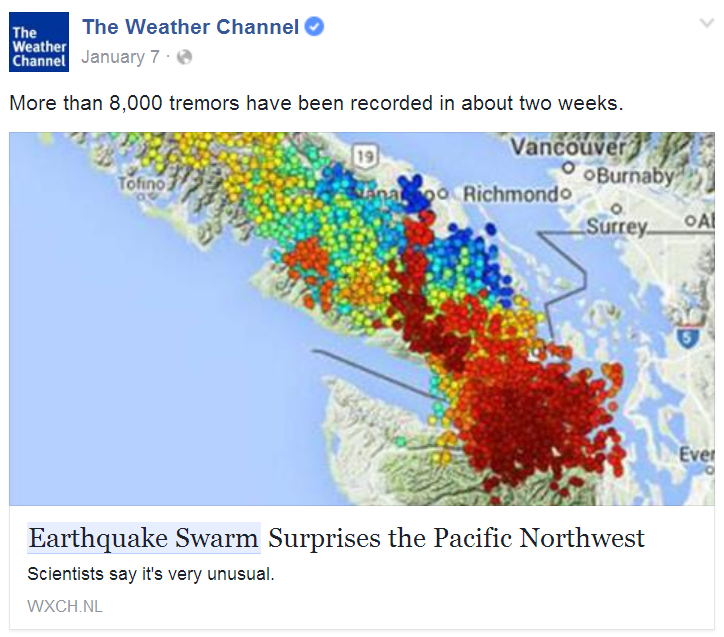 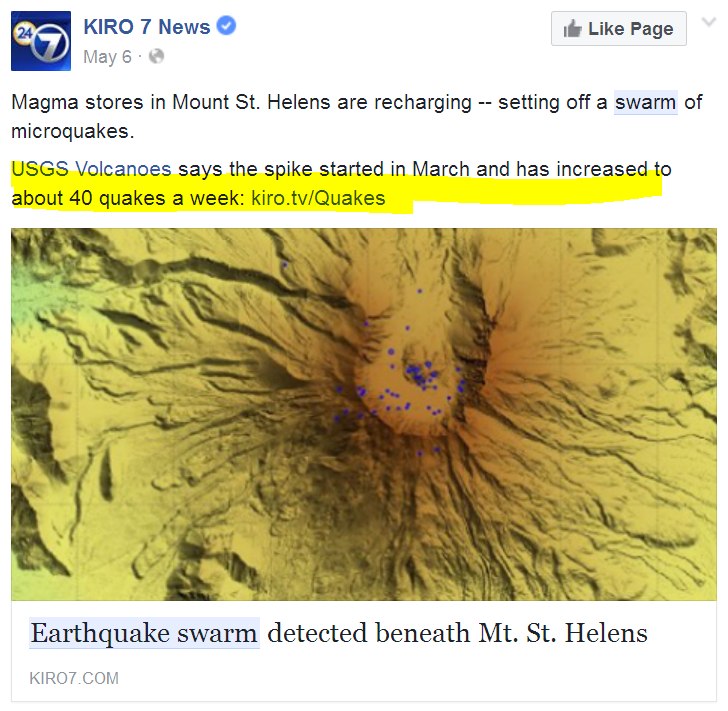 Starting on March 14, a number of small earthquakes have occurred beneath the volcano, at a depth between 1.2 to 4 miles. The earthquakes have low magnitudes of 0.5 or less with the largest a 1.3.

Over the last 8 weeks, there have been more than 130 earthquakes located by the Pacific Northwest Seismic Network and many more that are too small to be located.

The USGS says the earthquake rates have been steadily increasing since March, reaching nearly 40 located earthquakes a week, but there are no signs an imminent eruption.

The quakes are too small to be felt, even if you were standing on the surface directly above. 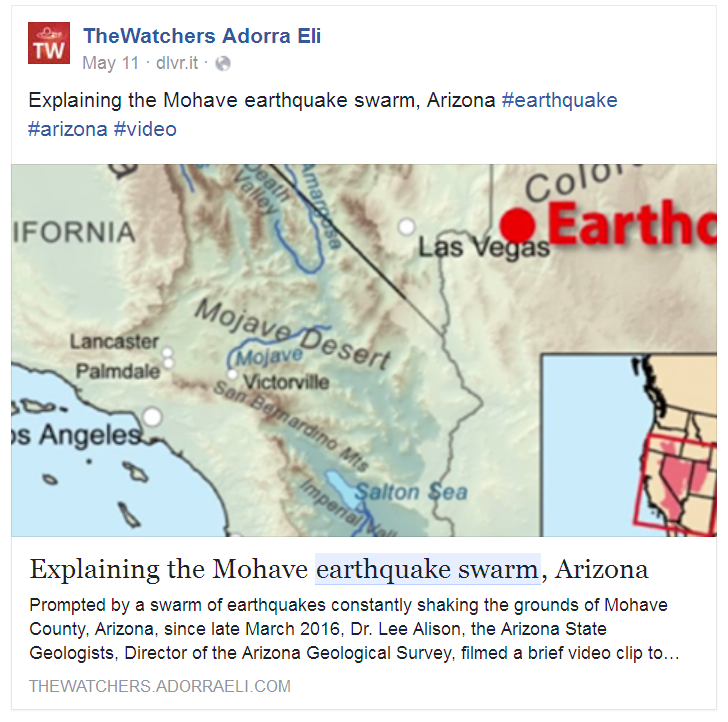 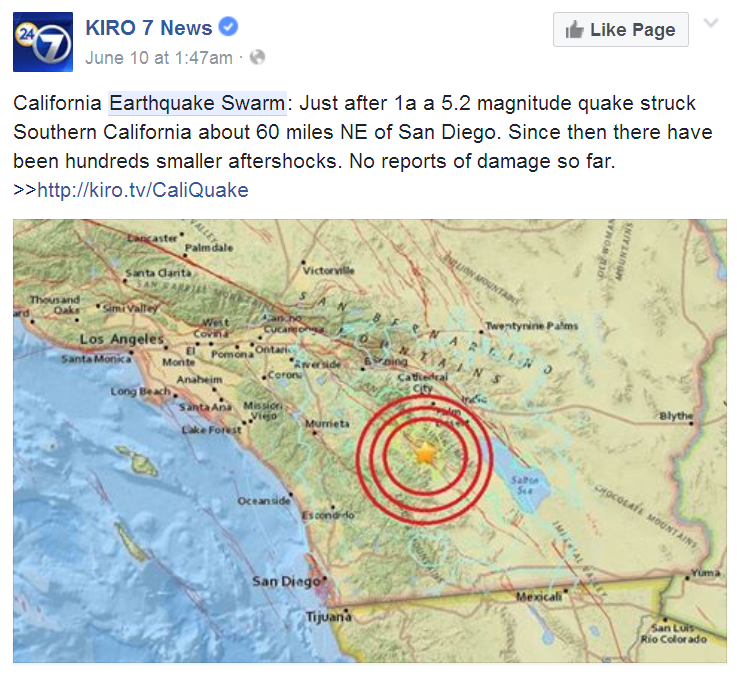