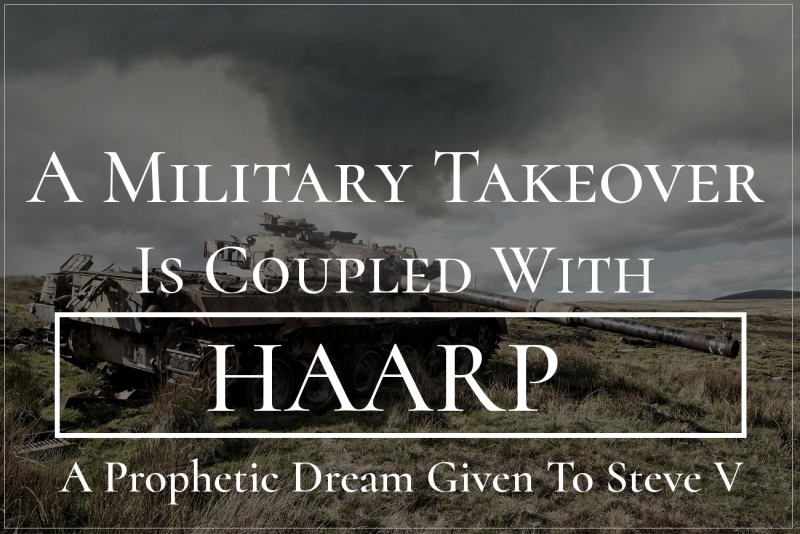 This message is a comment from Brother Alexander Cuppett about a message about a dream he received from his friend Steve V.

Awoke from the most incredible Dream!

Consider: Tornadoes were coming. Ominous. Literal tornadoes. I watched them as they formed in the sky. Several touched down. Immediately after, coordinated into the partial rubble, arriving on the scene were armed forces ready for a systematic takeover.

I asked the Lord, “How is this coordinated? How do you coordinate bad weather with foreign troops taking over a town or city?” The immediate answer was, “HAARP and chemtrails. They are coordinated with the shock troops. The Rothschild cabal controls the chemtrail mixtures from their trucks into planes; planes dump it into a jet stream grid; Rothschilds owns Weather Channel which is then misleading and disarming for a region; the foreign troops are on alert immediately after the manufactured tornadoes.”

After the locals are rounded up – while stunned and confused by the tornadoes – the Chicago Mercantile Exchange routinely pays out billions in weather derivatives to insiders who know the HAARP agenda. Profiteering billions from the destruction of America!

My concern is: More than likely, the insurance companies will reach a point where they will either delay pay out, or close and “declare bankruptcy” making off with the money. All the more reason for everyone to aliyah now….

What a dream! I still see it vividly before my eyes… Watching the tornadoes form and come down, do some devastation, and immediately the angry troops come in. When it reached that point, I was still stunned as I watched them banging at the door, as the tornadoes had a stunning effect!

Clearly, for National Defense, weather-as-a-weapon HAARP must be seen a major threat to American security!