Michael tells us about one of the most important pieces of news of the year! The Brexit vote, where Britian has left the EU. Could this mean the Pound and the Euro might collapse? What does this mean for the United States?

Michael Snyder talks about the Brexit vote that is taking place Thursday June 23rd. Could this vote cause the British Pound and the Euro currency to tank? We should all be watching this vote. 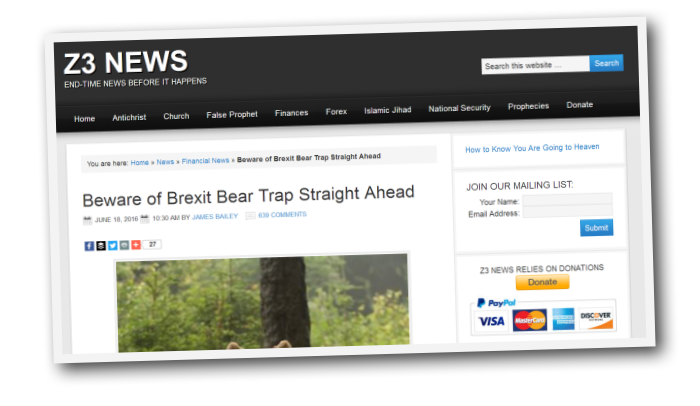 Here are some snippets from an article on Z3 news.com by author James Bailey

“When I first woke up, I was so impressed with the words, “England is going to Brexit,” I took those words literally and concluded the vote was going to pass. However, the words did not say, “The Brexit vote is going to pass.” So if that is not what it meant, then we have to look at other clues from the dream to interpret the meaning, as shown below”

“In July 2014, God gave me a dream which revealed shadow players were orchestrating a sudden collapse of the global economy. Their plan was to take down the markets in a way that surprised everyone except them. These unseen players are the financial elite who truly run the world’s governments. Their ultimate goal is to bring about a new world order, which they plan to control. To achieve that, they seek to take the wealth of the world for themselves, not only to enrich themselves, but also to impoverish everyone else at the same time. The collapse of the global economy is how they plan to do that, but it only works if it happens when no one else is expecting it. It only works if they are the only ones positioned to profit from it. They want everyone else to get destroyed while they get empowered.”

“Z3 contributor Victoria was warned of a devaluation of the dollar during June. She was told to take a position buying put options expiring on Friday July 1. I believe what she saw was connected to the Brexit vote”

“I also saw the dollar getting devalued in my July 2014 dream when the men at the U.S. table were suddenly knocked down. I believe they represented the dollar standing tall before it was knocked down. So when I first heard about Victoria’s warning of a dollar devaluation, I thought she was seeing the same one I saw. It took me a while to sort it out, but I now understand these are two separate events”

Read more of this on Z3 news.com