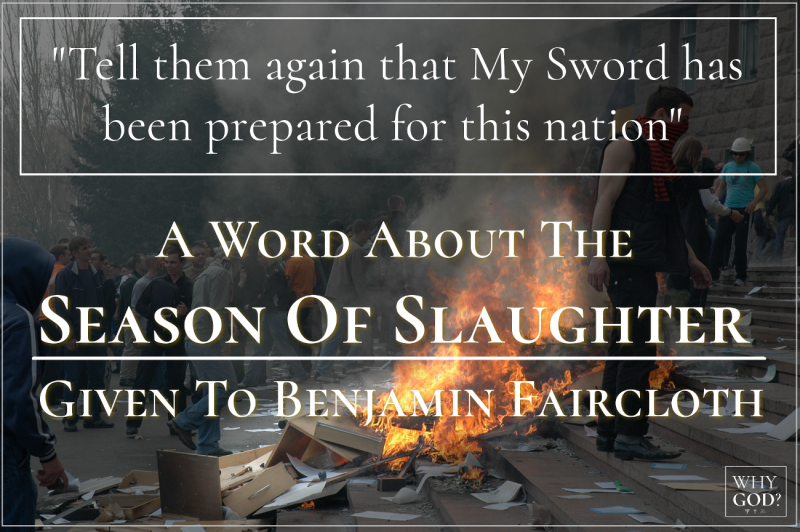 Anarchy, anarchy, anarchy! The seething pot of rebellion has spewed into your streets. Riots in the North, turmoil in the South, rebellion in the East, fires in the West! All of these will form your nation’s unrest! The lack of peace, is the lack of My Righteousness within the fabric and soul of this nation.

Abandonment of My Truth, will be filled with rebellion and hatred of the soul! Rejection is always followed by ejection. You have rejected Me America, and I have ejected you from My plans of prosperity and wholeness!

I am here, I have not changed, but you Oh America have changed! Since your birth, you sparkled with newness and adventure. You conquered every foe, but you have forgotten the strength behind your tow (struggle). It was Me! It was Grace that covered thee! Now your garments will be exposed! For they will be tattered by your foes! You wouldn’t listen to instruction, nor would you seek My wisdom and take counsel from Me!

America, I have wept for your sins and rejection of Me. But now I stand and have determined, you will see what a hornet’s nest of rebellion looks like within your streets! You will try to cover your eyes, but the fires will be too bright and all will see, what America the fallen will look like indeed!

After receiving the word of the Lord, the Father had me do something that I have never done (that I am aware of) before in 25 years of ministry. He spoke to me to preach from Isaiah 34. I just preached from that chapter last week in my sermon, “The Divided States of America”. I asked why would He want me to do that. I was concerned people would not respond to the meat of this word, thinking it was a repeat.

I will now present this message from Isaiah 34 with new revelation and understanding; along with a word for the Remnant Church out of Isaiah 32.

The Father instructed me to remind those who would read this word, that Isaiah 37:15 is His first choice!

Verse 1. Come near, ye nations, to hear; and hearken, ye people: let the earth hear, and all that is therein; the world, and all things that come forth of it.

The nations of the world are refusing to come and hear what the Father is saying to them. They reject the counsel of the Holy One because of their rebellion. Another reason they can’t hear the voice of the Father, is because there is a lack of the prophetic voices in the land who will speak to the “kings” of the earth! Like Moses did to the pharaoh, proving undeniably that the Jehovah is God and Lord of all!

Verse 2. For the indignation of the LORD is upon all nations, and his fury upon all their armies: he hath utterly destroyed them, he hath delivered them to the slaughter.

The Father spoke to me and said that we are in a season of slaughter! Please wake up America! Please understand we are not going back to the days of the Little House on the Prairie or the good ole days of the Andy Griffith Show! We are at the PNR…the point of no return!

4 For my sword shall be bathed in heaven: behold, it shall come down upon Idumea, and upon the people of my curse, to judgment.

5 The sword of the LORD is filled with blood, it is made fat with fatness, and with the blood of lambs and goats, with the fat of the kidneys of rams: for the LORD hath a sacrifice in Bozrah, and a great slaughter in the land of Idumea.

Nice, France revealed to us the sickness of this demonized disease called radical Islam! How could anyone with a breath and a pulse destroy women, men, children and babies by crushing the life out of them with a vehicle? Devastating and destroying their lives; robbing them of their future. What a minute, that’s what we do here in America in our abortion clinics! We crush and murder babies, robbing them of their future! We are worst then the terrorist snakes that slither across the globe!

When the sword comes to our nation in full swing, our reward for our murder of innocent lives we be justified! Many are saying why is this happening to us? We are you so negative preacher man? Why is the sword coming to us as a nation? The Father’s response to me, is very simple, REBELLION!

When the Father spoke these words, you will see what a hornet’s nest of rebellion looks like within your streets! He led me to study American history to explain our future from the pages of the past.  The city of Charlotte North Carolina, is older than the United States, being that is was charted in 1768. According to history they were the first government body in America to declare independence from the Crown of England, on May 20, 1775. In the Fall of 1780 Lord Cornwallis was on his way to destroy the Continental Army. But his journey only lasted 16 days. It was recorded that the patriots of Charlotte were “too hot for him”, and he latter referred to Charlotte as a “Hornet’s Nest of Rebellion”. It must have had a profound and prophetic impact, because today the city of Charlotte is known as the “Hornet’s Nest City”.

Here is the prophetic parallel that the Father showed me. As a nation we were birthed in rebellion. We rebelled against the King of England and his Crown. We received our freedom because we resisted the tyranny of a foreign land.

Our death as a nation will come from our rebellion against the King and His Throne! By resisting His Lordship, we have dethroned Him in America, and have lost our only protection from all out tyranny. We are cursed with what with we were blessed by! Our resistance of evil, has become our resistance to that which is good. Now we will witness what a Hornet’s nest looks like in America!

What happened in the nation of Turkey, will happen here in America! The false coup designed to purge the Turkish president of his enemies, appears for now to have been successful. Please understand this, there is a plan to change our nation forever, just like we are witnessing in Turkey, and it’s almost complete! We are one election (if there is one) away from total tyranny!

As I stated in my last prophetic word “The Divided States of America”, we are like Esau who sold his birthright! He fortified all the benefits of being the firstborn. America has sold her soul to the devil to live in the lap of luxury.

16 Seek ye out of the book of the LORD, and read: no one of these shall fail, none shall want her mate: for my mouth it hath commanded, and his spirit it hath gathered them.

17 And he hath cast the lot for them, and his hand hath divided it unto them by line: they shall possess it forever, from generation to generation shall they dwell therein.

Verse 16 speaks to us to take heed to the prophetic lessons of yesterday! To look back and see what happens to nations that turn their back on God. To consider our ways, and to repent of our sins. The Father in His Divine Mercy is telling to us to beware! Guard our hearts, hold our tongue from speaking vanities, and not to touch His city, Jerusalem! There is a reward for the nations that divide His land, and there is a heavy price to pay for cursing what the Father has called blessed! Genesis 12:3, Numbers 23:8

Anarchy will soon fill the streets of America. The chaos we have sown into the nations of the earth, including Israel, will be a boomerang that will surely find it’s mark!

In conclusion, I want to share with you a word for the Remnant Church. The Father took me to Isaiah 32 to give us hope when all will seem hopeless.

Verse 1. Behold, a king shall reign in righteousness, and princes shall rule in judgment.

Verse 2. And a man shall be as an hiding place from the wind, and a covert from the tempest; as rivers of water in a dry place, as the shadow of a great rock in a weary land.

The Father wants us to know that even in the midst of chaos, He has a perfect plan! He will never leave us; He will never forsake us. We are not orphans, but Heirs and joint Heirs in Christ! We are seated in Heavenly places with Him! We have a King, His name is Jesus, and He will fight for us because we are His Beloved! Even though blood with rise to the bridle in the future days, His plans and love are unstoppable! His covenant with us is unbreakable and His faithfulness is undeniable! We will see His Glory, and witness the greatest outpouring of the Holy Spirit in world history!

There is coming a glorious day of the mighty winds of God’s Spirit blowing across the ashes of this nation. We will see what the prophets of old prophesied about our day. But let me warn you, the Revival and a Great Awakening is not coming through the current model of today’s lukewarm lethargic church.

No, our current sin stained condition will not and cannot handle the coming Glory! But here is the great news; if will fall on the Rock and allow our lives to be broken before Him, in complete humility and repentance, we won’t be crushed when the Rock falls upon this nation! Matthew 21:44

In the last word the Father gave me, I asked the question of what shall we do with this word, He responded, “prepare for war”. This time, He spoke to me and said, “Take shelter in Me”! Church, I pray you heed the word of the Lord, and prepare your life accordingly. Time is not on our side!