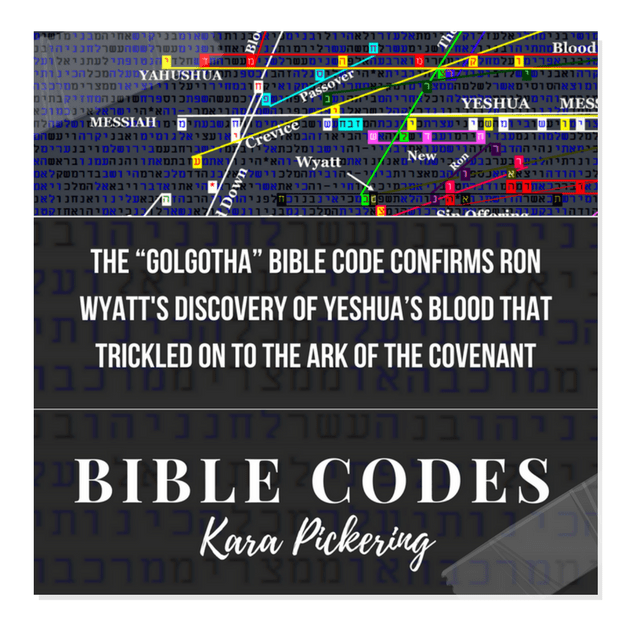 Amazing Bible Codes, that cannot be duplicated in any other known text, show that Yeshua (Jesus) was real. Was Ron Wyatt correct? Did our Savior’s blood really trickle down the crevice of Golgotha, and cover the Mercy Seat of the Ark of the Covenant? Does the Spear of Destiny exist?

See the blown up version of the code here

Most people are familiar with the story that began almost 2000 years ago, where Jesus of Nazareth, the one and only begotten Son of YHWH (God), gave his life, for the sins of the world.

However, many are not aware of the beautiful plan the Father had for the Ark of the Covenant, that was tucked away in the rocky hill named Golgotha.

The gospels of Matthew, Mark, Luke and John reference Golgotha as the “place of the skull.“

Matthew 27:33-34  And when they came to a place called Golgotha, which means The Place of the Skull,   They offered Him wine to drink, mixed with gall; but after tasting it, He refused to drink it.

Mark 15:22  They brought Jesus to a place called Golgotha, which means The Place of the Skull.

Luke 23:33  When they came to the place called The Skull, they crucified Him there, along with the criminals, one on His right and the other on His left.

John 19:17-18  Carrying His own cross, He went out to The Place of the Skull, which in Aramaic is called Golgotha.  There they crucified Him, and with Him two others, one on each side, with Jesus in the middle.…

Although the book of Maccabees is not canonized, it does shed some historical insight to the location of the Ark of the Covenant, and where it was placed 600 years before Jesus’s (Yeshua’s) Sacrifice.

2 Maccabees 2:   4 These same records also tell us that Jeremiah, acting under divine guidance, commanded the Tent of the Lord’s Presence and the Covenant Box to follow him to the mountain where Moses had looked down on the land which God had promised our people. 5 When Jeremiah got to the mountain, he found a huge cave and there he hid the Tent of the Lord’s Presence, the Covenant Box, and the altar of incense. Then he sealed up the entrance.

6 Some of Jeremiah’s friends tried to follow him and mark the way, but they could not find the cave. 7 When Jeremiah learned what they had done, he reprimanded them, saying,

No one must know about this place until God gathers his people together again and shows them mercy. 8 At that time he will reveal where these things are hidden, and the dazzling light of his presence will be seen in the cloud, as it was in the time of Moses and on the occasion when Solomon prayed that the Temple might be dedicated in holy splendor.

Very interesting that Jeremiah said “No one must know about this place until God gathers his people together again and shows them mercy.”

Israel has been gathered together again, and God (YHWH) has shown them great mercy!  Israel became a nation in 1948 and has flourished in the land; the inheritance, promised to Abraham in the book of Genesis.  This is now the time that these hidden things will be revealed.

At the time that Jeremiah hid the “Tent of the Lord’s presence, the Covenant Box and the Alter of Incense” they did not know that the Son of YHWH (God) would lay down his life, directly above the Ark of the Covenant.  The Father however, knew that the ground would shake violently, making a fracture in the rock below, and the blood of the Savior would trickle down through the crevice, onto the Mercy Seat of the Ark, after the Spear of Destiny had pierced His son’s side.

Yeshua’s blood was now the innocent blood of the lamb.  No longer did the sacrifice of animals have to be sprinkled onto the Mercy Seat, to cover sin.  Yeshua’s blood now washed away all sin, for those that would accept it.

This is an account of Ron Wyatt’s story, how he came to find the Ark of the Covenant. 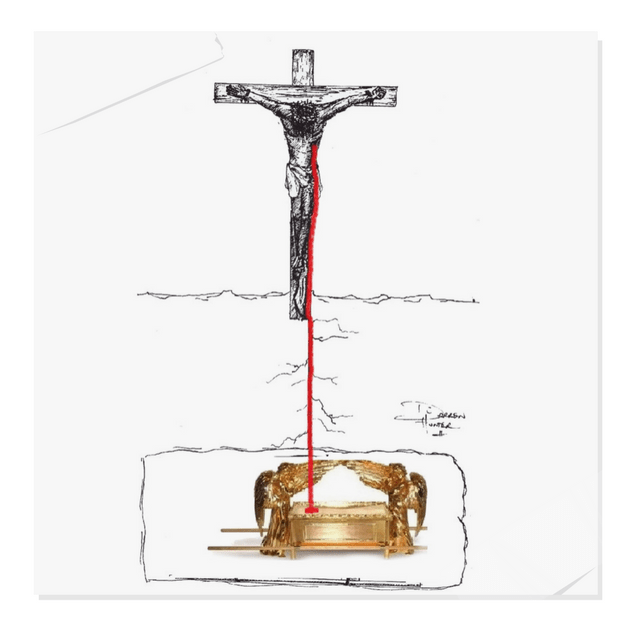 Ron Wyatt not only had seen the Ark of the Covenant, the Tablets of Stone, and other items that were hidden away; he also managed to collect scrapings of old blood, that had trickled down the crevice of the rock onto the Mercy Seat of the Ark.  Wyatt took the blood samples to a laboratory in Israel to have it analyzed.

Mr. Wyatt did not tell the laboratory in advance where this blood was from.  He only asked that when they got the results, that he would be in attendance.

Not only did this blood defy all known scientific information about “dead blood” and chromosome counts, it produced only 24 chromosomes.  This blood was supernatural, as normal human blood has 46 chromosomes.  There was only one chromosome passed on to this human from their father; the “Y” chromosome, that was the determining factor to make this human male.  The origin of all of the other 23 chromosomes in this blood sample, were from the mother.

The Israeli laboratory technicians were blown away.  This person should not have existed, let alone, lived long enough to have been crucified.  The Lab Techs asked Ron Wyatt, “Where did you get this blood?  Who’s blood is this?”    Wyatt’s response was, “This is the blood of your Messiah…  That’s the blood of Jesus Christ.”

It is this blood…  The Blood of the Messiah, Yeshua (Jesus), that trickled down the crevice in the rock of Golgotha, onto the Mercy Seat of the Ark of the Covenant for you and me.

And now, this has been confirmed in Bible Codes…left in the encoded terms of the Old Testament (The Tanach) that were instructed to be sealed up, until the time of the end to the Prophet Daniel.

Thank you Ron Wyatt, for diligently answering the call the Father placed on your life!

For more information on Ron Wyatt’s discovery of the Ark of the Covenant, visit:  http://www.arkdiscovery.com/aoc-1.htm

“On Golgotha” Bible Code Matrix, and Terms List are protected by copyright law.  Reprints/Re-Blogs of this article are permitted, as long as full credit is given to prophetictimelines.wordpress.com, Author: Kara Pickering. It is also appreciated, if a notice of reprint is sent through this site’s contact page. 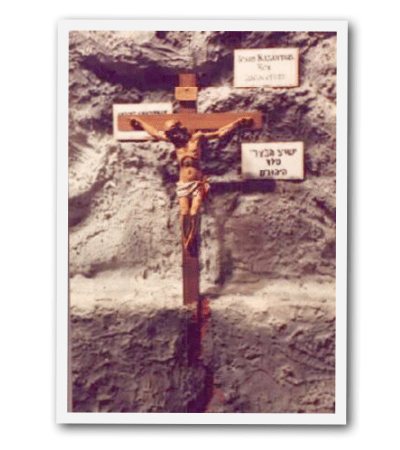 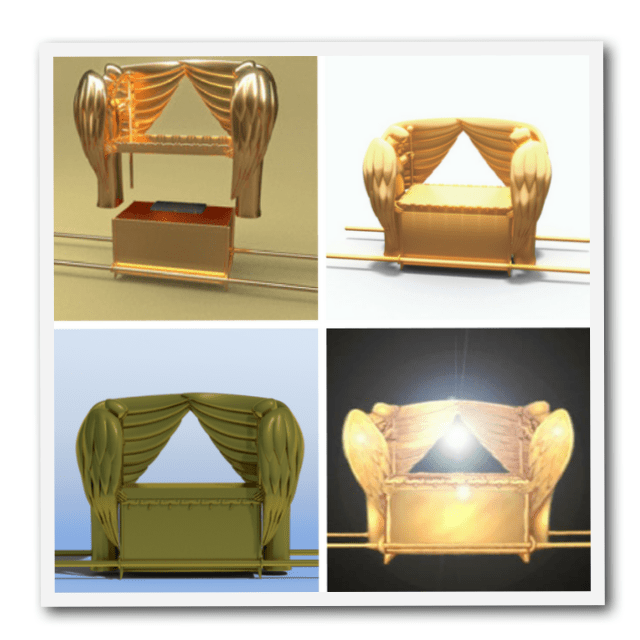 The photos below are various artists impressions and models based on what Ron Wyatt described.  -Picture Credit –covenantkeepers.co.uk 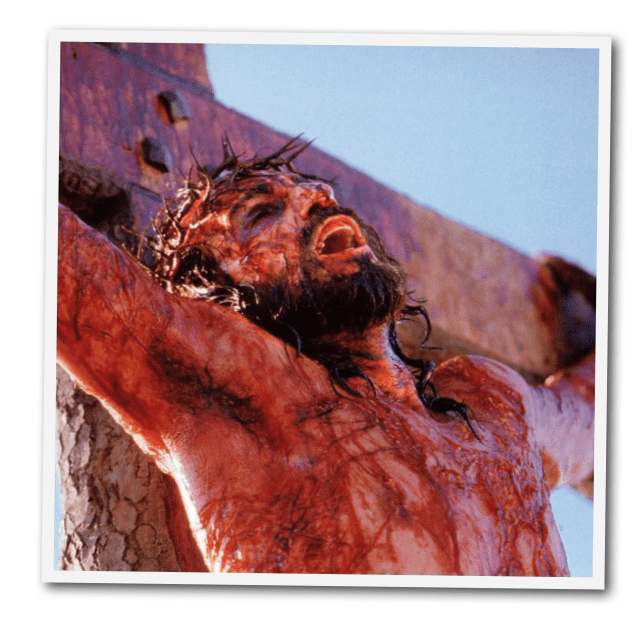 Passion Of The Christ Movie

Please read Jessica’s Vision of what Yeshua looked like on the cross.  She gave a description of a slaughtering…  not a few slashes of blood.