There isn’t a week that goes by that I don’t see some sort of article or comment of Planet x in my news feed.  Many people are talking about it, and it is hard to determine what is correct and what is fabricated.  We have a couple friends who keep up with the news about Planet x, and to be honest, I haven’t really taken the time to investigate it.  Astronomy isn’t my passion, nor would I know where to begin.  Although the people who do follow this topic suggest looking at Gill Broussard’s research if you are interested in learning what is not mentioned in the main stream media.

Here is a couple snips from an email we got from a friend of ours…..

I wanted to drop you a quick note concerning the subject.  As I learned about this planet from Mr. Gill Broussard, I became urgent for me to gain all the knowledge I could.  So, I got in touch with Mr. Broussard and set up a meeting yesterday evening where I had about 15 people attend.   He traveled to Longview TX and we had a 3 hour presentation last night and we also ate breakfast together this morning and met for another 3 hours.

I want to STRONGLY ENCOURAGE the both of you to look deeply into the information he presents.  What he is presenting is NO FAR FETCHED IDEA OR FARSE!  The biblical connections along with the secular connections are staggering.  It fits scripture.  And, Michael, as to needing hard evidence, he has used the empirical scientific method and correlated the data with the established models and it proves out that there were 14 events in the bible that coincide with 10 separate passings of this planet, together with 7 secular events.

As I have discovered, this Planet is the most talked about object in the bible and the least known, until now.  The timing can only have been orchestrated by the Almighty.  Remember it is only in the last 10 – 15 years that we have had the knowledge and technology to determine what is being presented.  The effects we are seeing in our world today are what scripture calls the beginning of the birth pains and are a result of the nearness of this planet.

Again, as your brother in Christ, I want to encourage you to look at this information, it is a life changer.  Remember what our savior told us, and that is, these times will be like none before and ever again.  We have Noah’s flood and that was not the worst.

Again, I appreciate all of what you two have done.  I have learned much!

Thanks, Mr C (Not his real name, identity hidden) 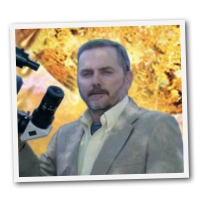 Tonight I stumbled a chart below showing a timeline for planet x for the year 2017 and it lead me across Gill Broussard’s facebook page.   I cannot say that I have researched this in any depth, however as I was looking through his facebook news feed, I noticed a comment about the extreme weather shifts in the historical records associated with this crossing.

Could we see a massive change in weather and earthquakes as this planet passes?  Could we see an extremely cold winter this season, next season and the season after?

Many people have speculated the timing of the planet x…and I am sure as you look into this topic, you will get a variety of opinions from “don’t see it”, “doesn’t exist“…”coming soon”  and so on.

If you want to research this topic, I would suggest starting off with Gill’s research…as it seems like many people have respected his findings.  Looking through some of his posts on facebook, he gives his opinion on pictures facebook friends post that are floating around the net of planet x.  It is nice to see that he can call out the fakes, which most of us wouldn’t know the difference.

Below are links to his website, along with the trailer of his materials.  He also gives away a free pdf file of a book he has written.  All can be found below.

We have friends who are involved in astronomy who say they personally they have not spotted this planet, and many others who say it does exist.  I will leave that up to you if you want to dive in and investigate it, and then from there you can form your own opinions.   It certainly has captured so many peoples attention on the net.  We get a lot of emails about this topic in general.

Four times in Earth’s history this object crossed Earth’s path when we were extremely close, such as in the case of Noah’s flood, Sodom & Gomorrah, The Exodus, & Hezekiah’s reign. Then, 150 days later, Earth crosses the path where the object entered a year prior. The debris field, still littered with fresh objects in tow, some huge, hit our atmosphere &, of course, burn up, but some get through and impact.. One particular impact made the Gulf of Mexico at the end of the hundred and fifty days of Noah’s flood, beginning in March. It is written that there was a Mighty Wind, called the Breath of God at the end of that hundred fifty days.. I believe that is the strike of the meteor.

Debris from the passing of the object lasts for years in those two zones, but the effect is most profoundly observed within the first year, and less with each passing year.

From the website: “The Fiery ‘Red Dragon of Old,’ Nibiru, Nemisis, Intruder, Planet X; it goes by a lot of names, but no one or their research has been able to comprehensively put together the facts about this elusive planetary body, until now. Amateur astronomer and independent researcher, Gill Broussard will challenge the denial of its existence.  This documentary presentation attempts to scratch the surface and help connect the dots with Gill’s years of grueling and immense research at its foundation. His calculations push the boundaries of the traditional  scientific paradigms and will baffle the Biblical scholars and theologians. Planet 7X will have you looking up into the stars with new eyes.”

“This is a estimate of the position of Planet-7X using Kepler’s laws of planetary motion for the arrival to match up with March 15/16 2017. There is still no valid sightings in the public realm at this time.”

Gill Broussard “When P-7X is seen, it will look like a star similar to the way you see Venus and Jupiter in the nighttime sky. Only the last 2 1/2 weeks of its approach will it appear sizable and threatening to the public eye.”

“When we reverse the software model from the arrival date of March 15/16, 2017, we get a line-up of Planet-7X with Job’s Coffin (Job’s Area) which happens when Hanukkah (Feast of Lights) begins on the night of Dec 24, 2016. The time to look for this is at 7:00 PM in all time zones, in the direction where the Sun has set. Be alert… time will tell. (Share this Post to all)”

““The second angel sounded his trumpet, and something like a huge mountain, all ablaze, was thrown into the sea. A third of the sea turned into blood, a third of the living creatures in the sea died, and a third of the ships were destroyed.” (Revelation 8:8,9)“ 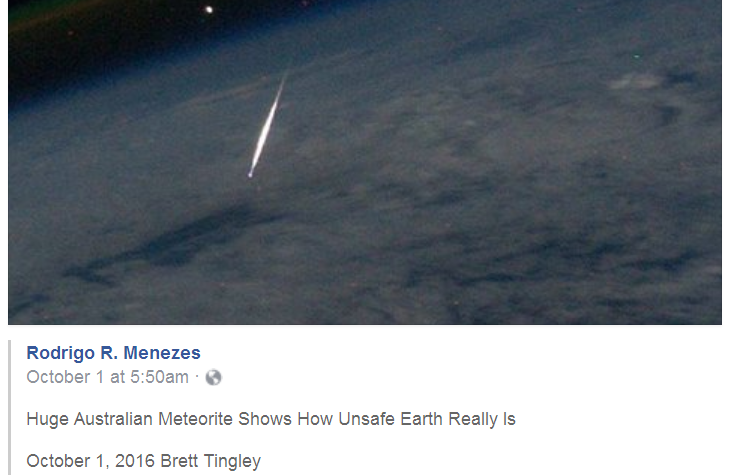 Climate change is cited endlessly as the most dire threat our planet faces, all the while fiery doom hurtles through space every day, narrowly missing our beloved blue planet. If you enjoy sleeping, it’s probably best not to think about it – until headlines like this one pop up, that is.

Earlier this week, a massive fireball streaked across the sky above Queensland, Australia before apparently impacting the Earth or exploding above ground. Residents reported feeling the ground shake and being blinded by an immense flash of light. According to the Brisbane Times, police received multiple calls from concerned residents who were frightened by the impact. While the exact nature of the falling object is unknown, astronomer Owen Bennedick at the Wappa Falls Observatory told Brisbane Times that reports of the impact spread across a 100-kilometre radius, showing that “whatever it was, it was big.”  Read more on facebook