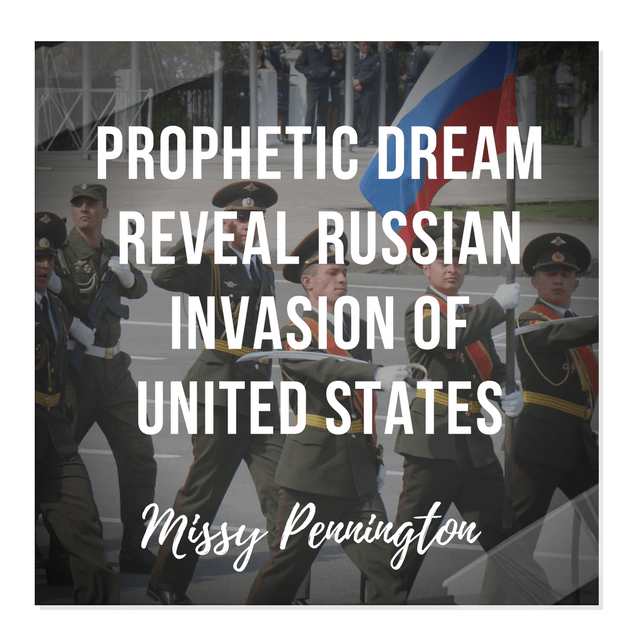 I received an email yesterday from Z3 News contributor Missy Pennington. She shared the following two prophetic dreams, one received by her husband and the other by her. Both dreams reveal an invasion of Russian soldiers in the United States.

“I started reading Z3 News not too long ago. Many of the dreams and visions have been very confirming. Both my husband and I have had an increase in both dreams and visions in the past year or so. We’ve been in ministry for a number of years, pastored a church, and now are teaching bible studies out of our home.

I thought I would pass on the dreams that we’ve had. I think it is just another confirmation of the Lord speaking to and warning his children.

Two nights ago, my husband had a dream that I believe is prophetic. In his dream, he was in an open field in what seemed to be like a ten-acre military park. There were a few other people with him. He looked up into the sky and saw multiple American F14 jet fighters flying above in a circular formation. As he looked closer, the jets began to transform into larger cargo styled bombers.

He knew something was wrong. He turned and looked at the ground and saw there were large wooden boxes in the distance. There were doors on the boxes and they opened and military men began to emerge out of them. There were dozens of boxes and hundreds of men in American uniforms.

His first thought was that our military was conducting some sort of military exercise. The men looked American, but as they got closer to him, he realized they were speaking Russian. He decided to run because all of his guns and ammo were in one of those wooden boxes. As he was running, he realized he was too far away and he would either be killed or captured. This is where the dream ended.

When he told me about his dream, I remembered that I had also had a dream about a Russian invasion. I went back to my journal entry which was October 24, 2015. My dream was very short, but I saw a large stack of bound newspapers hit the ground. The headline said ‘RUSSIA INVADES…’ but I could not read where it invaded. I knew it was a US newspaper and I knew it had happened in a US city or region, but I was not able to see where. That is where the dream ended.

Intercessory prayer has increased on both my husband and I in the past year and a half.  We believe the unified prayers of the saints have been effective regarding the election and if we stay on course and continue with ferverent prayer, we can avoid a foreign invasion as well. God bless you! “

These prophetic dreams echo the same warning delivered to America by the late Dmitru Duduman. He received many dreams and visions warning that unless America repents of our sins before God, we will be invaded by Russia.

I believe repentance is the only way to avoid this judgment. Offering up prayers without genuine repentance is ineffective, but the effective prayers of a RIGHTEOUS man will get results (James 5:16). The prayers of an unrighteous man will not get results. So the first step is not asking God to bring our nation to repentance, but first we must turn away from our own sins and seek God’s forgiveness and right standing in our own life. Then our prayers will be effective when we ask God to heal our land and establish His kingdom here.