Tanya W Macias recorded a word that was given to her in her prayer time that was very loud and clear about a coming war in America.  She says in the video that she quit her full time job just to pray full time for her family’s safety in the days ahead.

She states that war drums are sounding on our soil, and that the Lord has not spared anyone around the world for persecution.  She says that it is up to us as Christians to PLEAD to Yahweh for the sake of our brothers and sisters in this nation.  You can find her live video here on facebook

There are several posts where I have been collecting visions and dreams of a coming invasion to the United States.  All the dreams have several themes within them.  One of the themes has to do with Russia, and the other has to do with china.  Some of the dreams are combined with a coming tsunami wave. 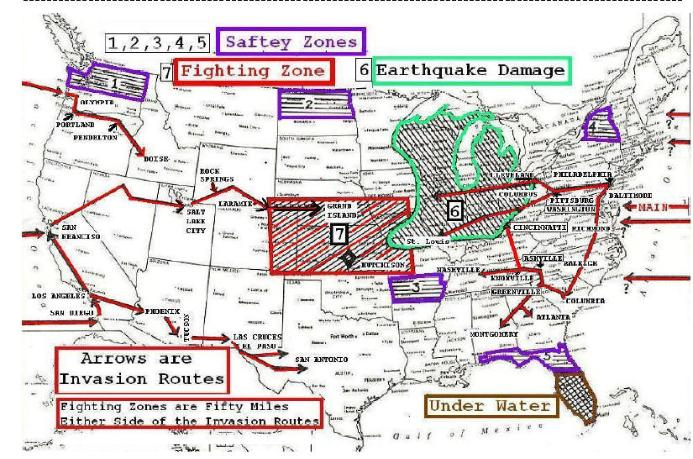 Here is another map detailed by Chuck Youngbrandt which was found on his facebook page.

What he sees lines up with the safe zones which many say are in Washington, Idaho and the Ozark Mountains.  I am not sure about Northern Florida.  I haven’t heard yet about a safe zone there.   The invasion mentions are always through Washington state, and California.  It is interesting to see the routes here on this map.

I do not want people selling my version of the hand map on the internet, but I do want them to be able to find me.  Paul.

US_Interstates_300percent_withFightingZones.jpg   upload larger version of above picture, same as one above it, but only interstate routes shown

Red lines are to indicate interstate routes.  Actual routes are near the lines I have added.  Areas about fifty miles each side of the interstate will be in a bad way from invaders.

Again, don’t set your life choices by these words, or papers, or pictures.   You need to know from the Lord.

If these are never needed, you have my permission to laugh.

I will not mind. (Found here http://www.survivalprimer.com)

Wesley Kennedy This isn’t about California or tsunami but I dreamed of an invasion. In my dream I looked into the heavens. I saw Kim Jun Un’s face (dictator of North Korea) , like a huge picture of him, coming toward earth. I saw the word Russia under his name. Idk really what it meant but I think, that North Korea is being backed by Russia against the United States.

Lindsey Marceau In 2013 I had a dream of Asian (Chinese) military invasion. I remembered they were Asian and had a red arm band around their uniformed arms.

Theresa Bulmer that’s what I saw as well last year, they were Asian military and they meant business!
Lindsey Marceau Theresa Bulmer Yes they were not nice. They held me and my family hostage while they rummaged through our stuff trying to find something. I screamed at them I was so upset…asking them why they were so mean. And one turned to me and said “if you think we’re bad, the Russians are next.”

Tiffany Powell Boal  I had a similar dream several years ago. There was an invasion by an asian army (I could only see uniforms and soldiers but didn’t know who at the time) and they were walking down streets with explosions in the big city behind them and into the church we attended at the time. I saw members of the church hiding under the floors and the army was walking above them on the floor looking for people and trying to figure out where they all were. Many of the parents were screaming and running to the nurseries for their kids, and several families who had all come together were gathered to a separate area being held. There were other details but after the dream when I woke up I looked up the uniform I saw and it was Korean. I fully believe N. Korea is part of a massive attack on the US, on our soil, and on Believers.

Vision: I saw the Empire State building fall and NYC in all effect leveled. A great shock wave from nukes. The tsunami will blast it and Manhattan Island. All our symbols Will be leveled. And the stock exchange. With Russian warships and nuclear subs, paratroopers and a full scale attack. Oh Babylon how you have fallen. In one hour You will be destroyed.! by Elijahfire Milton Wildermann

Rhoda Helene Weber 4 years ago I dreamt of a huge tsunami hitting the west coast, similar to yours. I was taken to a higher place and placed in a glass house where I watched the water raise and NO ONE was alarmed. Then about 3 years ago I saw ships on the ocean all coming to the West coast. On the ships aliens… not a single American concerned about this I called the alert and no one listened.. I knew if they were allowed to land it was because judgement had come.… I have had tsunami dreams over the past 10 years along with others.

Anita Merritt Greening I have had dreams of missiles hitting major US cities. The cities were completely blown away. Also, a dream of Russian MIGs flying over the continental US. That dream of the MIGs took place about 4 years ago. I had no idea what a MIG was, and had to look it up after I woke up. In another dream, I saw a giant book. It was unlike any I have ever seen. It was very old but in good condition. Soldiers were looking at it. I looked over their shoulders at the book. The title was Critical Events of the World. I have never seen such a huge book. They opened it, and I saw a couple of dates. I don’t remember the events that went with the dates or the year of the events. One of the dates was March 11th. I pray over the dates every year.

Bonita Roper In 2004 I had a dream where hundreds of people were hid in the basement of a church , we were helping people who were wounded. The small windows in the basement were boarded over and it seemed we were in hiding. I could here the sound of military men marching outside the window. And new in the Spirit that there had been a disaster or we had been attacked by an enemy. But when we would run out of supplies there would be a truck appear and supply us with what we needed without anyone being able to see. Our family in the Midwest is preparing for anything.

Joshua Shallenberger (May 29, 2016) I had a dream last night that someone detonated a small nuke downtown Chicago. I remember vividly seeing the small mushroom cloud from a distance.

Shannon Snyder Ive dreamed that the east coast of the US was being invaded and bombed. At the same time there was natural disaster going on