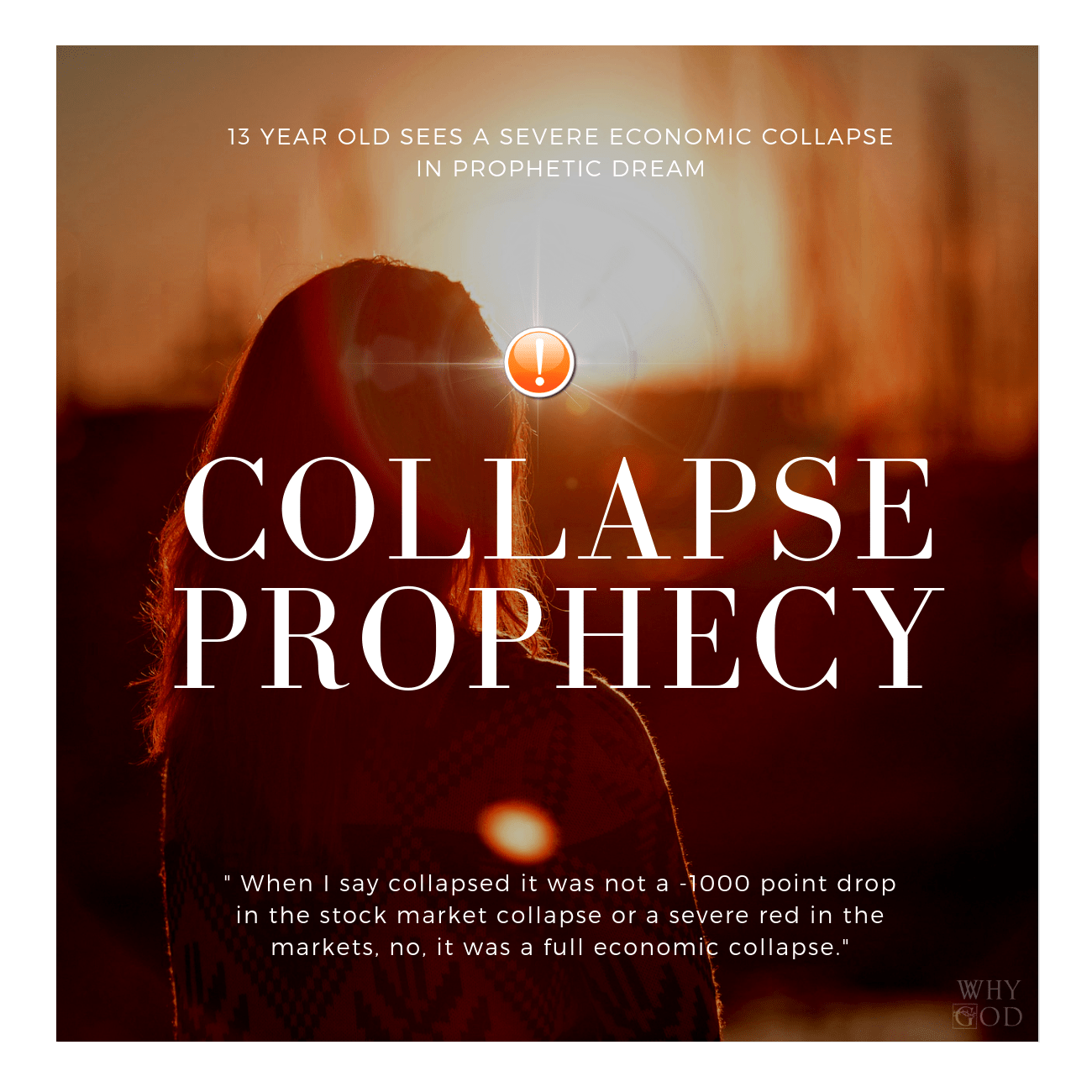 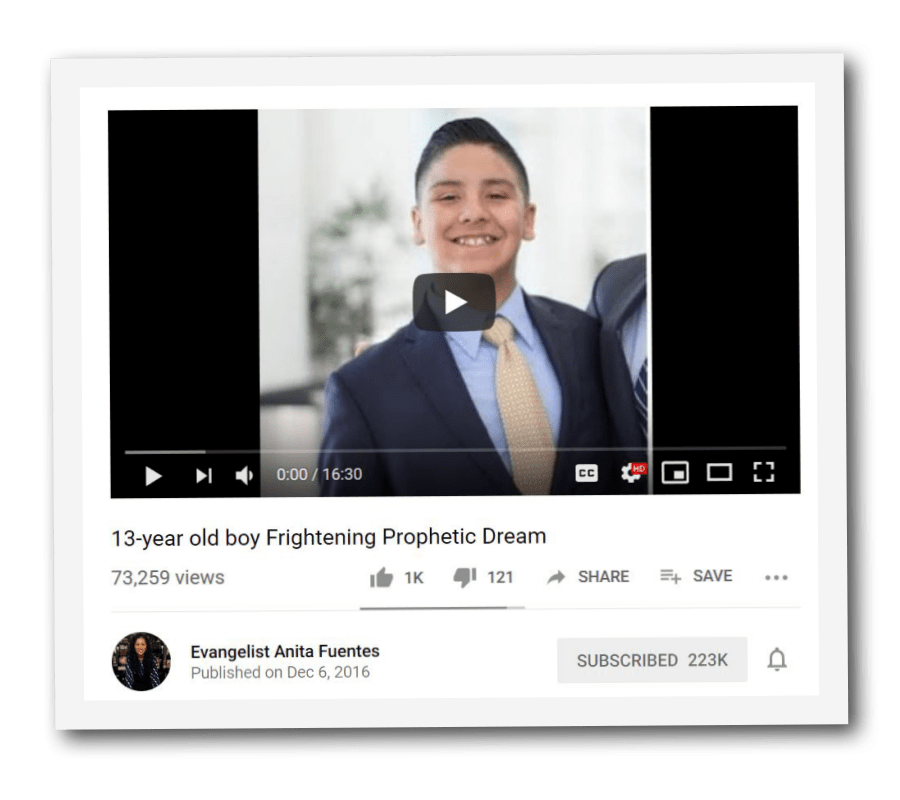 In my dream it was shortly after my birthday (January 29th 2017 he’ll be 14 years old) like days after we were in a one story house I was playing with my brothers and sister having a good time when all of a sudden we heard that the economy collapsed.

When I say collapsed it was not a -1000 point drop in the stock market collapse or a severe red in the markets, no, it was a full economic collapse. Everything collapsed, as if someone literally pulled the plug on the entire state of the economy, it happened that quick and that severe.

People started to riot and shoot. We got in the car and started to drive and hide because people were rioting, breaking into people’s houses. These were not military or government but regular citizens who went into chaos doing this. Thugs. Fires were being set to buildings. It happened so quickly.

We drove the whole night till the next day going as far away as possible without stopping. We didn’t even stop once.

We passed by a school. We saw these kids playing in the school yard, like recess but you knew there was no official class in session because of the collapse. The kids were my age and up and they were playing basketball, and waving a banner, the banner had writing on it but I don’t know what the writing said. It seemed very strange as we passed by.

We hid in a shed by this time it was night and lived there and made a home there and it was a good size to fit for us all even though it was a shed.

Then dad wanted to take us out to check how things were, to see what was happening outside since we came to that shed. Mom you stood at the shed by yourself as we all went with dad.

Dad started to drive and as we drove the car turned extremely small, like a very, very small economy car, and I even saw how dads head touched the roof of the car and how he did his best to drive it while keeping his head from hitting the ceiling of it.

We passed by that same school again but this time we I saw the same kids playing on the school yard this time something dramatic took place. You can tell by the way they moved, walked, played that the entire atmosphere had changed and they were not themselves. They were still playing but they were lifeless, like they had no soul at all. One of the kids looked at us drive by and they stared at us was evil and very wrong.

As we drove you can tell the winds of change was in the air. Then Hannah, my 4 year old sister (who turns 5 years old the day before my birthday) said in the middle of driving through this,

“I want McDonalds!”, I told her we couldn’t because the economy collapsed and we I heard myself say that it scared me because I knew it actually happened. But she kept insisting and got into a fit asking for chicken nuggets. I told her the dollar didn’t even have value anymore.

There was no value anymore in the dollar, like it would have been a surprise if someone even would have taken it anyone’s money at that time that’s how much the dollar held no value.

It was like darkness was waiting for that moment and now that the moment happened the darkness came fast in almost like they didn’t want God to change His mind.

The mark of the beast came out and that’s why the kids were acting like that.

We made it back to the shed and I sat on the couch and grabbed some kind of toy to fiddle my hands with trying to get comfortable but I had a shaking that was uncontrollable. It pierced all the way into my bones and it wasn’t because I was cold but I think because I was in shock. I couldn’t stop the shaking.

The atmosphere changed and I knew things were not the same. Everything in society changed abnormally. I then said “I wish this were a dream, I can’t believe this is happening.” I knew it wasn’t a dream, you know typically you have a dream and you see yourself and you know it’s a dream, not this one, I was me in that dream and I felt, sensed and tasted everything around me and I was me in that dream. Like I knew I couldn’t wake myself up because I knew it was real.

I could feel myself shaking and my heart racing and a terrible feeling of dread. In the dream I said to myself, “I wish we had more time.” All these thoughts came quickly to me with such intensity. I asked myself where are we going to survive. The thick intense darkly alive atmospheric presence of dread and darkness made me question how am I going to live through this. There was no way to protect myself from it. Like now if I see something on tv that is ungodly I could quickly change the channel and be away from it, but not this. There was no way to hide from it. Even if you would go to a cave and lock yourself in there was no way you can hide from it. Even if all of us were huddled as close as possible and you were right in the middle you were not away from this. It was a very real tangible presence of darkness.

I then saw you mom from the corner of my eye and you looked at me so calm and I thought to myself, “how is she so calm? Is she not feeling what I’m feeling? Was it because she didn’t go out? Or maybe she has thicker spiritual skin? I was confused and as you looked you said, “what did you see out there?” I said, “this is unreal, the Time came… this is real!”

To try and defend yourself was hopeless. The spiritual warfare was so thick in the natural that you knew natural weapons would not be able to fight it. It was like all of the Angels of the Lord moved themselves out the way and the darkness immediately stepped in. It seemed liked anything protecting the earth, the atmosphere, us was moved out of the way but it was like God allowed. It was like everything turned upside and the spiritual world of darkness literally fell on earth. It was that real, that intense.

Something hit me which first caused me to respond was that it literally became no longer spiritual warfare but it was brought from the spirit into the natural. It was tangible warfare you felt, tasted, sensed, that it was all around and you felt the dark presence of the intensity of it seep into your very pours.

Like all the spiritual warfare any of us have gotten before this time was now on earth in fullness and nonstop, no rest. It didn’t matter what was around me tangible like the tv, stove, sofa the reality of the presence of darkness outweighed it. Even if I wanted to take my attention away the very object I would try to use would be warped into the very darkness that enveloped society and the earth as a whole. It was beyond scary. It even took over nature.

I kept asking myself how am I or us going to live through this? Red dawn, Armageddon, Left Behind, all these movies gives us an idea on people fighting and surviving, those are all lies, this was not how the Time was. All that we see in the movies are fake.

You will not be able to survive this, ‘The time’. You know you will die as a martyr or be defeated by this darkness but there was no other option.

I was so scared and trembling so bad I said to myself, “I am not ready for this, Lord if you would have just told me even a minute before this happened it would have helped me.” Then I immediately thought of the 11:59 message Jesus preaches through mom. Then daddy opened the door and I woke up wide awake.