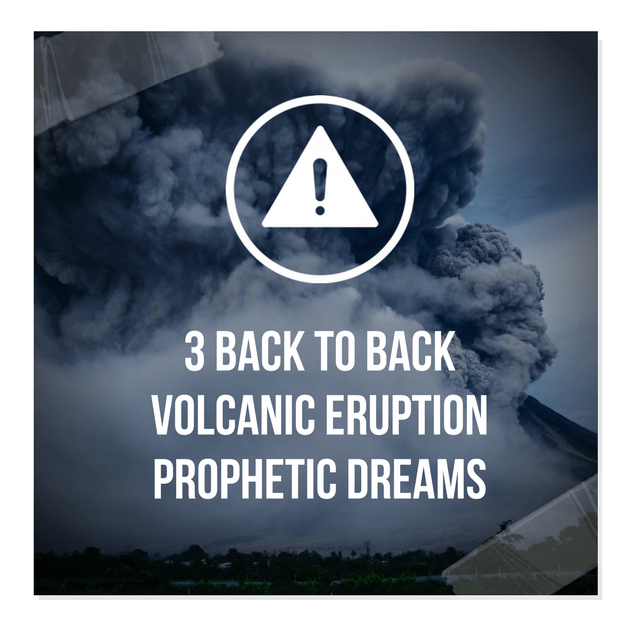 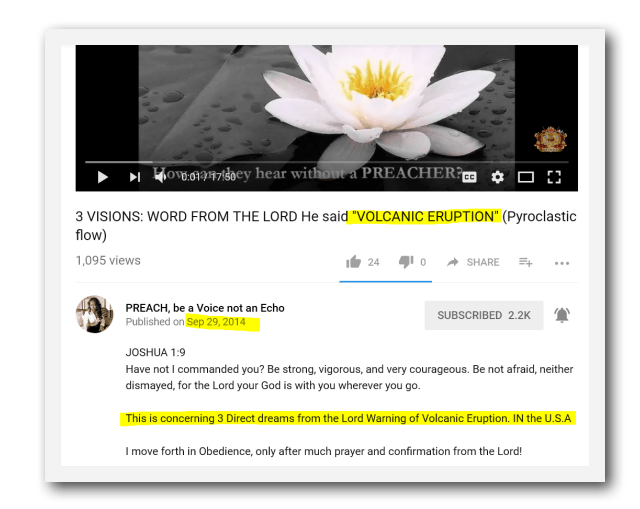 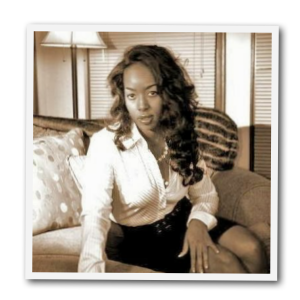 (Taken from the youtube transcript, so the language may not read perfectly, and has been slightly cleaned up to understand)

It could be that Shawntrell saw each volcano which exploded on the west coast?  See that post here:

” This point the Lord has spoken forth very clearly “volcanic eruption”. I prayed about this and of course it wasn’t unto the third dream for confirmation”

“I say first on August 31st of this year was the first dream. Simply in this dream I was out with my husband and we were in the neighborhood. It was about as clear as it is waking right now.

You know there’s a difference – there’s dreaming, their visions are something very natural. And you know we’ve had dreams and they’re they can sometimes seem cartoonish and animated but this is about as real as it gets.

Sitting out in the night sky we were walking through neighborhoods talking to people randomly on doors.  Now I don’t know what we were doing but this was what was in the dream.  And it was that it was in the dusk it was in it was night the Sun had gone down and as we proceeded to do this there were various people that I saw that I knew in this dream but a lot of people we didn’t know. And then suddenly there was a loud deafening boom deafening just loud and and the ground shook and you could see a cloud which I know is ash now rising swiftly and quickly into the air and fire was in the midst of it and everyone stopped and they looked and at this moment is when I heard the Lord speak he said volcanic eruption.  Everyone began to run and at that point I open my eyes I prayed about it. This is in the dreams he gave me three in rapid it’s pretty rapid succession.

The next dream that I had was on 9-11 of this year and I had seen 911 repeatedly you know have you had situations to where every time you look at the clock you’re not trying to day and evening when you just happened to glance you see the same numbers over and
over again sometime you need to pay attention to that not some time you need to pay  attention to it and begin to pray about it because numbers have meanings.

I mean God willing I will I have a list that it’s been researched and the meaning of some of these numbers because they are important and he does send messages through numbers so we need to pay attention.  Today the dream on 9/11 was a little bit longer and a lot more graphic.  I mean this is a dream that I woke in heartbreak because of I knew what it meant and there’s no doubt that these volcanic eruptions were in the USA.

“In the second dream it was a very hilly place I would want to say near California and or near this region Nevada somewhere near this but people were out just enjoying the day was a beautiful day and people were just out in the streets and and and it was very hilly and I still want to say in that in that California region are somewhere where a lot of mountains are but no doubt he put in my heart that it is in the USA we were definitely in America and people were out and in the streets and having a good time.

And what you got to know about most of the dreams I mean, I know I’m not the only one that experienced like this it’s always been like this for me where the Lord will draw me out in the spirit and I will be looking on and then at some point I’m put right in the midst I can feel what they’re feeling it’s almost like I’ve become the person I can feel what they’re feeling Terral they feel the heat is coming but I believe that the Lord protects me for from a lot of the actual pain that they would feel because I feel it but I know did its help.

“In this dream I was looking on I was being moved about I could tell it was in the spirit realm because I was being moved about from one position to the next and then suddenly there was a loud loud explosion and everyone stopped in the street and you can see the ash I mean it rose so fast and so high and begin to spread out I mean it was just it was massive and everyone yelled it’s the volcano and I heard again volcanic eruption everyone beginning to run.

Then suddenly I was moved to another part of the dream everyone was aware of this eruption that was going on and there was a woman.

It was at this point I was looking on and then I was suddenly put in her place.

I was looking on and she was hurrying through her apartment and I want to say Oklahoma cause it looks almost like an apartment when I was there it looks around that did it the ash was spreading that far that it looked like it was that area and as she was hurrying I guess to prepare and see what she had in her kitchen then she ran back into her bedroom to look out of the window to see where the ash was because you could see it from various cities this ash can be seen from through multiple cities in the US and wherever it went off it can still be seen from cities around that’s how high it was and how much it was it had was spreading and quickly.

And she went to look out the window to see how far it was going and then when she put it back you can still see she looked at the ash cloud in the air and it was at this point I was put in her place the moment her foot hit the outside of that door when she came to come out of her room again and she stepped out the moment she hit into that area that’s a dining room to kitchen area it was so full of ash when I tell you the thickness of this ash it was hot and I was able to feel that what she felt it was hot it was suffocating it went down the throat taking the air it was blinding when I say blinding I tried to find pictures on the internet because he wants me to blog this too is that I know picture two showed what he showed me nothing could properly depict what he showed me if you touched her own nose with your hand and open eyes you would not see your own hand that’s how thick this ash was and the woman began to panic and try to hurry and when she went to move quickly with this hot ash as it’s burning her throat and I’m feeling this she hit the wall the corner of the wall I know it was a corner cuz I don’t run into a corner of a wall before I know what it feels like the corner of a wall and she hit it hard because she was in full motion and I mean when I felt the terror her heart.