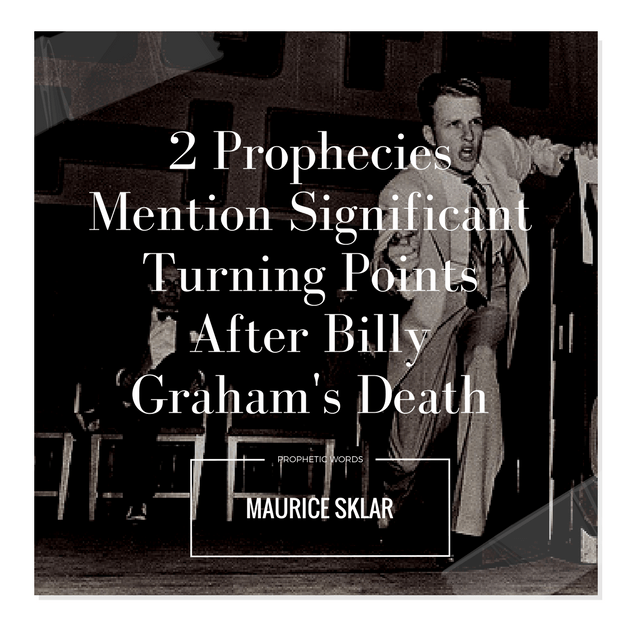 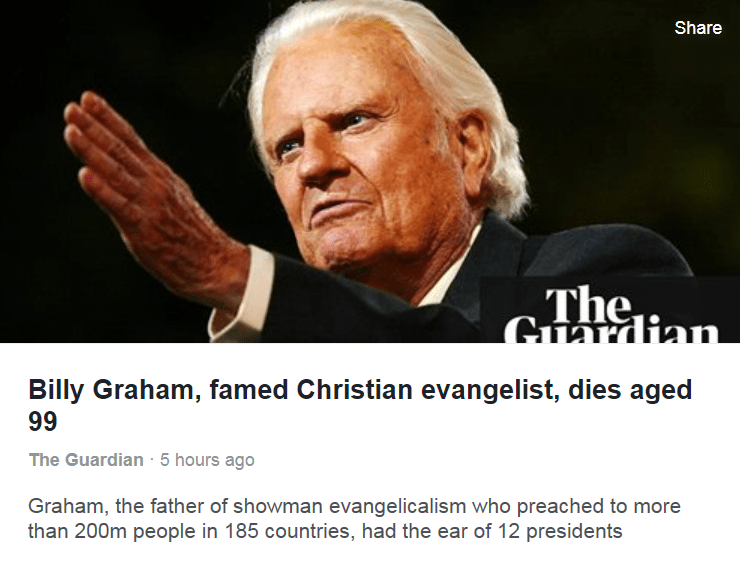 Billy Graham passed away today, the 21’st of February.  Graham was considered one of the most influential preacher of the 20th century. He spoke to millions at evangelistic rallies during his career, and has always been known for his direct, passionate and forceful delivery of the gospel.

Maurice Sklar had two prophecies that talked about a turning point which would mark a new season, or time period, once Billy Graham passed away.

Read the first 2005 prophecy here: – “I am separating My bride from the Laodicean church of today” – A Prophetic Word Given To Maurice Sklar

Noteable Quotes In This Prophecy (The whole prophecy is powerful,….I left out a lot of detail from these quotes….  so please read the entire prophecy)

“I am sending my refining fire into the church. I am separating My bride from the Laodicean church of today. I am preparing her. I am purifying her. She will be without spot and without blemish”

“Many hundreds of millions are waiting to hear the good news in China, in India, and in the other Buddhist and Muslim dominated regions of Asia, the near east and the middle east, as well as the poorest of nations in Africa and central and South America, as well as the hundreds of islands in the oceans of the earth. I am shifting my focus to them. But you, O church of America and the West have prostituted yourself at every opportunity before every high place and idol shrine. You have substituted religion for My Presence”

I will shake California in a warning, and then there shall finally come the earthquake that I have mercifully withheld for so many years“

“There shall be 5 terrorist attacks that will hit America in ever increasing destruction upon the major cities. A nuclear “dirty bomb” will blow up in a major city in the south of America”

” North Korea will launch a sudden nuclear attack and then be completely destroyed. Only the prayers of South Korea can stop it. “

“Israel is soon to once again send their planes and blow up the nuclear “plants” of Iran. Syria will soon collapse economically and be replaced by a fanatical Islamic government.”

“God will become popular in the culture, but not the Bible and My name (Jesus). It will be a false gospel message. Not many will truly be born again. Only a remnant in My church will truly stay in right relationship to Me. When you see me take Billy Graham and Oral Roberts home, you will know that America and the West have received their last call”

“Most of My bride is in mainland China now. Many are in Asia, and Korea and India and Brazil and Russia and Kenya and Nigeria and throughout Africa. Most of My bride is hidden away in their prayer closets and have been persecuted and driven out of the churches by abusive pastors and false prophets, ministry leaders, and oppressive government leaders. Many are in prison. Some are daily dying of starvation and disease. Most of My bride has been beaten and left by the side of the road by the religious ‘wolves in sheep’s clothing’”

Read this entire word below:

A 2011 word given to Maurice Sklar also mentions Billy Graham as a turning point for the world.

“There is coming an all-out war in the Middle East as the neighboring Arab nations will come against Israel with a sudden missile attack starting from the north with Hezbollah, Lebanon, and Syria. Other Arab nations will join. Israel will be hit from all sides at once and there will be deaths and partial destruction of settlements, smaller cities to the north, and some damage to Tel Aviv and Jerusalem as well. Israel will respond with great force, and limited nuclear weapons will release devastation upon the neighboring countries, particularly Lebanon, Damascus, which will be destroyed completely, and the rest of Syria as well as military strikes into Iran, Gaza, and even northern Egypt/Sinai region.

The resulting shaking of the West will then release a tremendous movement of Jews making aliyah back to Israel. There will no longer be security or stability as it has been up to now in America and Europe. Israel will emerge victorious from this war, but hurt.”

“I am taking Billy Graham home to heaven soon. When you see this, know that My time of grace for the Gentile nations is coming to a close.” “

The LORD spoke to me today and said, “Many of My people believe that I will not judge the wicked in the world. But, read My word! I have warned you all through it that I am coming to judge all for their wickedness. But, I am waiting for the fullness of the harvest. Both the wheat and the tares are coming to their fullness. Those who will repent and bow before me in surrender and humility will be saved. Those who refuse My grace will remain standing in pride and defiance of My glory.

Oh, earth, earth, earth – You have tasted of My goodness and My grace through ministry of Billy Graham and many others for the past 100 years. Yes! I am love. Yes! I am patient, kind, and longsuffering! Yes! I am merciful!

But, I am also Holy! I am a consuming fire! I must judge sin! I must bring an end to the tyranny of Satanic hatred and destruction.

Many false prophets and teachers are proclaiming that the Fear of the LORD, and the holiness of consecration are no longer necessary. That is a lie of the enemy. Repent and surrender to Me now! There is no “new revelation” that can change Me! I never change! Do you want to know the truth? Then, read my book! I am not made in your image, oh wicked and perverse generation. You are made in My image!

I told you over and over through My true prophets, that when I take Billy Graham home, it will signal the end to the Church age of grace to the nations.

I can wait no longer! As I let Methuselah live so long, so I stretched out Billy Graham’s life as long as I did.

The time of reckoning is here! I am coming for My Bride to take her home! I am coming to completely restore Israel and the Jewish people to their land and their Messiah…

AND I AM COMING WITH MY HOLY FIRE AND MY GLORY TO JUDGE THE EARTH FOR HER EVIL AND WICKEDNESS BEFORE ME.

Just as you have experienced My love and grace for 2,000 years, so shall you who have rejected and turned from Me experience My Day of Wrath and My Vengeance. For it is written: “for vengeance is MINE. I WILL REPAY, saith the LORD!

Do you think that I am a man like you, and that I lie?!

I AM THE HOLY ONE OF ISRAEL!

As given to Maurice Sklar
Friday, February 23, 2018
Jerusalem, Israel