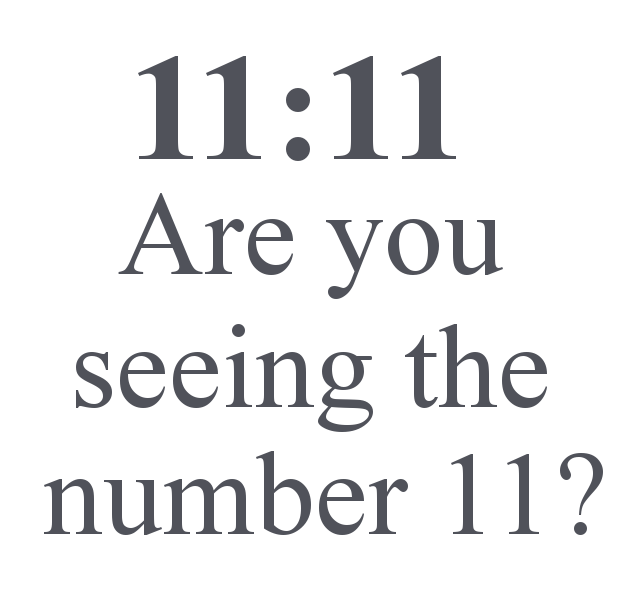 There are a number of people who are reporting they are experiencing a dream or seeing a sequence of numbers.

Are you having this as well?

Is there a specific meaning connected with the number eleven found in the Word of God?

Many believe that 11 represents the sign that it is the 11th hour,in the end days.  It is also widely believed that the number 11 represents disorder and confusion.

One meaning of the number “eleven” is urgent, the last chance, or something is about to happen.

The Lord Jesus Christ speaks of the number “eleven” only twice, both times in Matthew 20, in the phrase “the eleventh hour”.

The “eleventh hour” means “urgency”, or the last chance before something happens.

In Matthew 20, the Lord Jesus coined the famous phrase “the eleventh hour” which has related to a  warning or a sense of immediate urgency: “time is running out” – “the last possible moment.”

Could it be that the Lord sending people messages, or dreams that the world as a whole, or America could be facing an urgent “eleventh hour” warning?

Are we standing at the “eleventh hour” before the “deadline” or an event of some sort?

Properties of the number 11 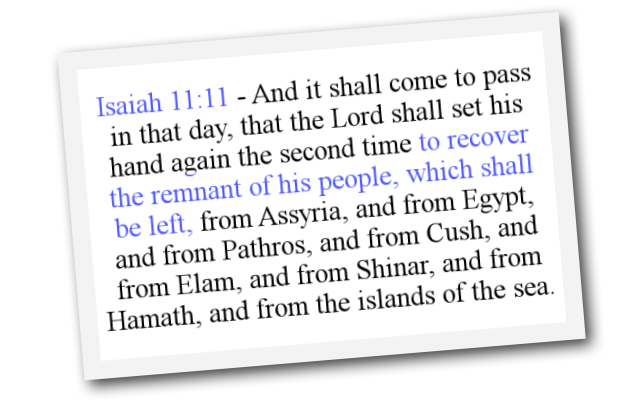 New Perspectives On This Topic – January 2016- Since seeing the number 11 every day, I do think it has to do with Judgement, but we also see a major prophecy about to play out in these last days.  The Remnant will be gathered again from the corners of the earth.  While there is judgement coming, there are also exciting times ahead of a re-gathering.  See more in this video Michael Snyder did called “The re-gathering of the 10 Lost Tribes” 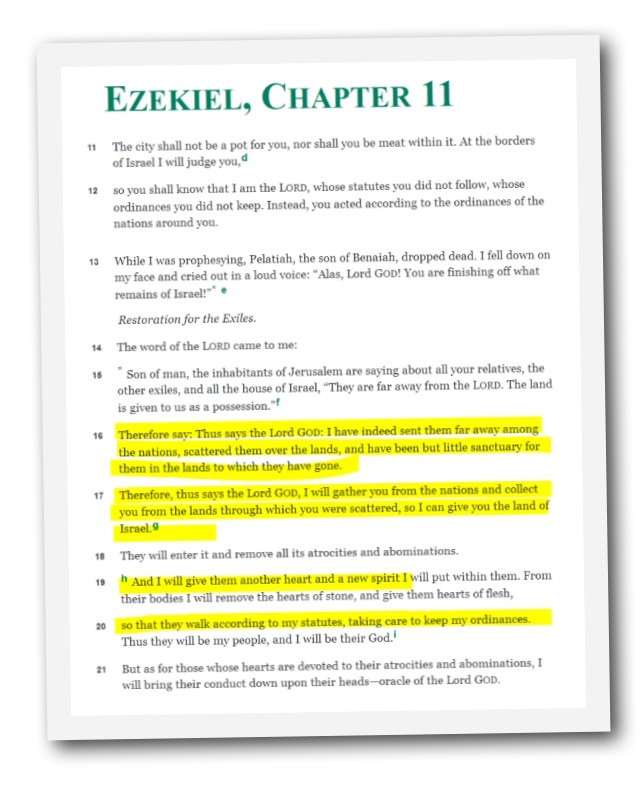 Remarkably Ezekiel 11 also talks about the re-gathering of the remnant.

Romans 11: 11 also talks about how Salvation has come to the gentiles.  What we could be seeing is those who keep the commandments of God (the law) in Revelation 12:17, (which has Judah’s attention), but ALSO have the POWER which will provoke them to jealousy.

Again, talking about a select group of people who didn’t go astray-Ezekiel 48:11

Does The NUMBER ’11’ Point To ‘THE LAST HOUR’ Or Biblical Like Judgments?

11 AND Judgement In The Bible

4. ( Wickedness of Sodom and Gomorrah ) The judgement was executed in Genesis chapter 19 verse “eleven”:

5. ( The Judgement Of Tyrus ) ” And it came to pass in the eleventh year, in the first day of the month, that the word of the LORD came unto me”

6. ( The Judgement Of Pharoah King Of Egypt ) “And it came to pass in the eleventh year, in the first month, in the seventh day of the month” AND, Relating to the judgement of Egypt, because the Pharaoh, King of Egypt refused to release the children of Israel, the Lord executed “eleven” judgements against Egypt    Read more lists at from av1611.org

The catastrophic earthquake that struck Japan happened on March 11th, 2011.  The earthquake, registered 9.0 on the rictor scale triggered a gigantic tsunami and frightening nuclear reactor crisis.

Could we be facing another tsunami on our coastlines?  Many people have had these dreams. 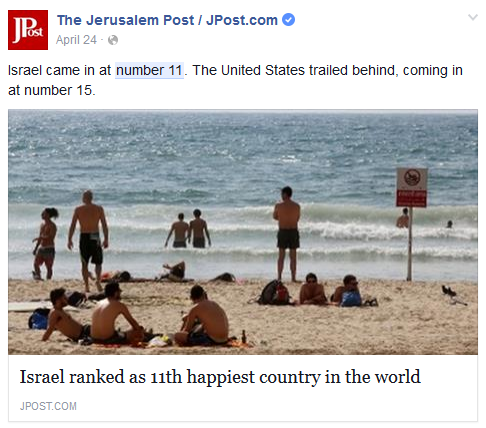 Could God be pointing to Israel? 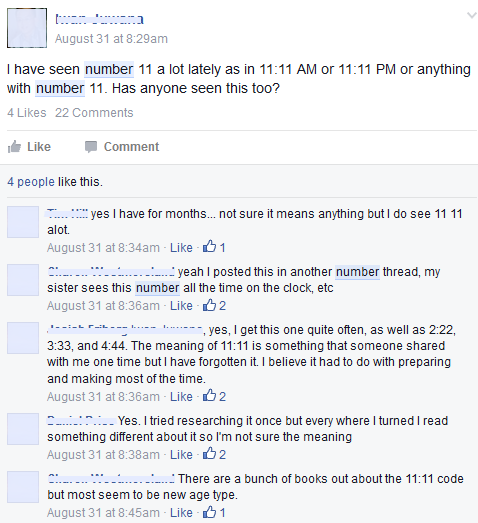 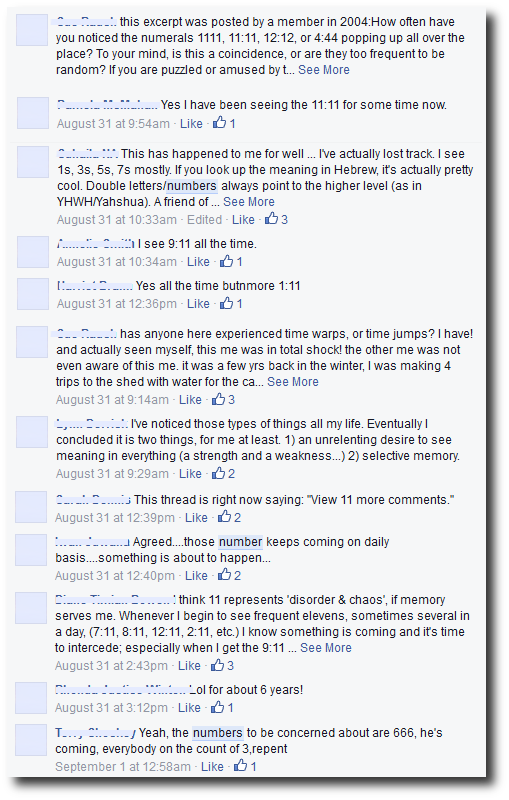 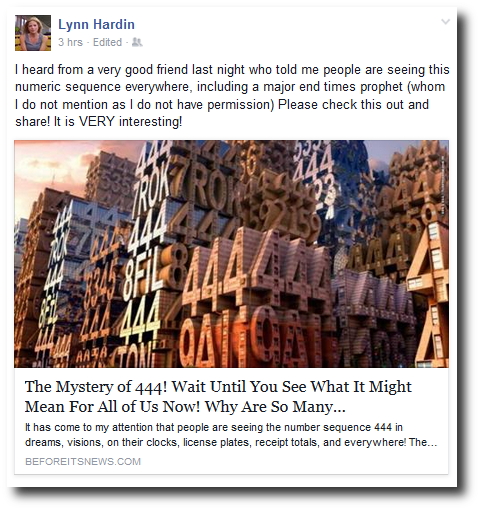 Lynn Leahz did a post on many people seeing the number 444.  She goes on to explain what the significance of the number 4, and 444.  Check out this post here. 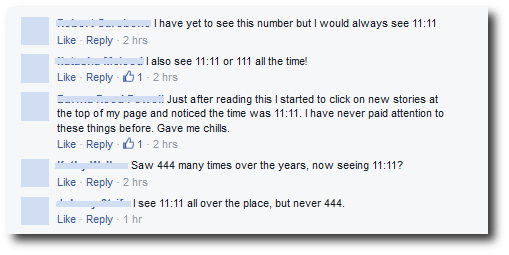 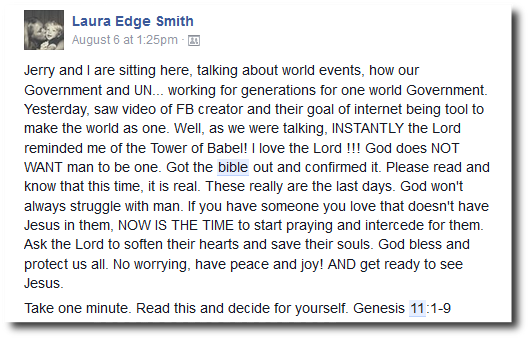 Could this be talking about A New World Government 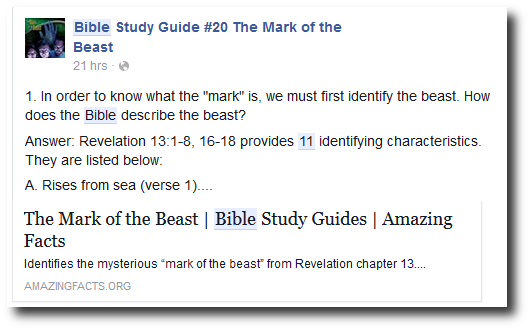 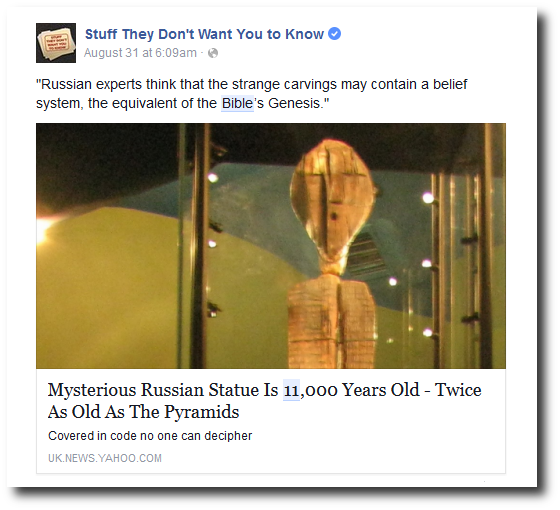 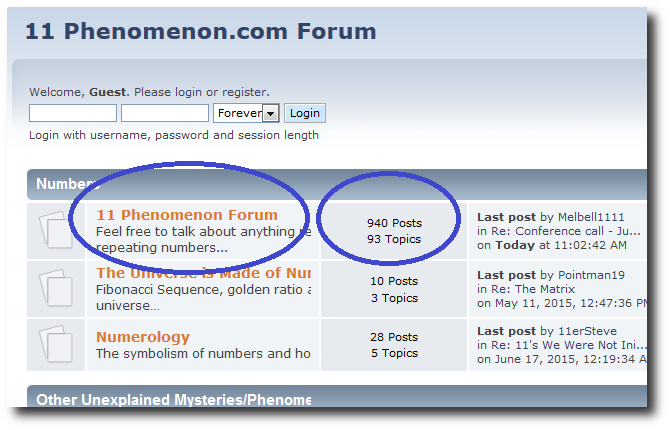 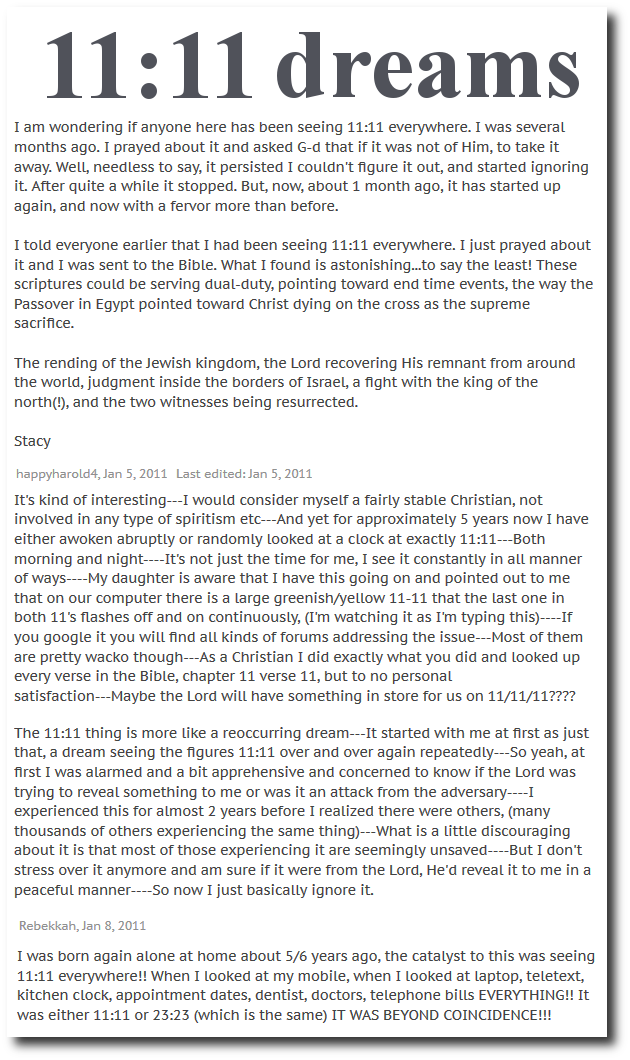 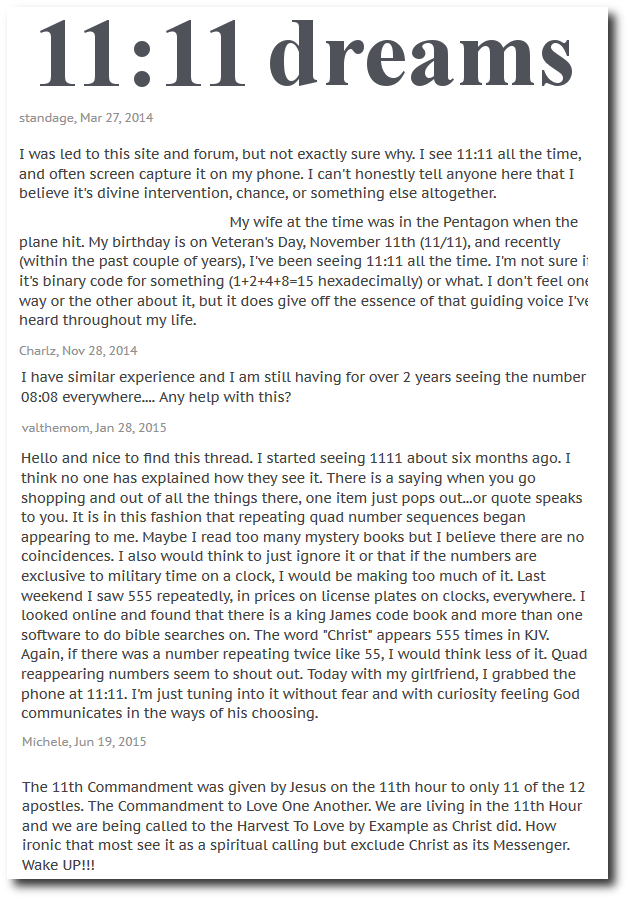 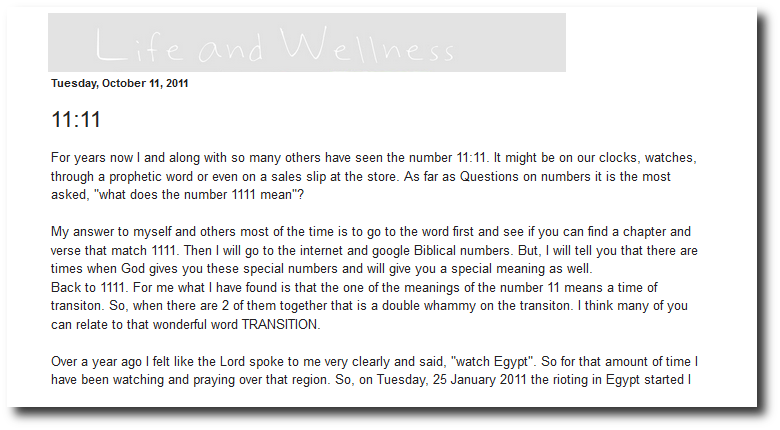 They conclude with  “It seems like there is change going on all over the whole and that principalities are falling or are close to collapse. Might it be that those powers of the air are being shaken and those demonic holds as in power and greed are falling faster then we can think. I know there is corruption in our nation and all nations and could it just be that God is standing up and saying “enough”. 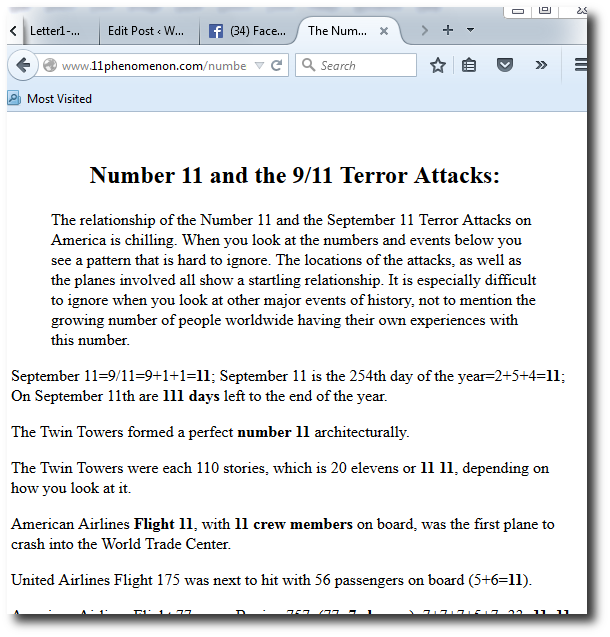 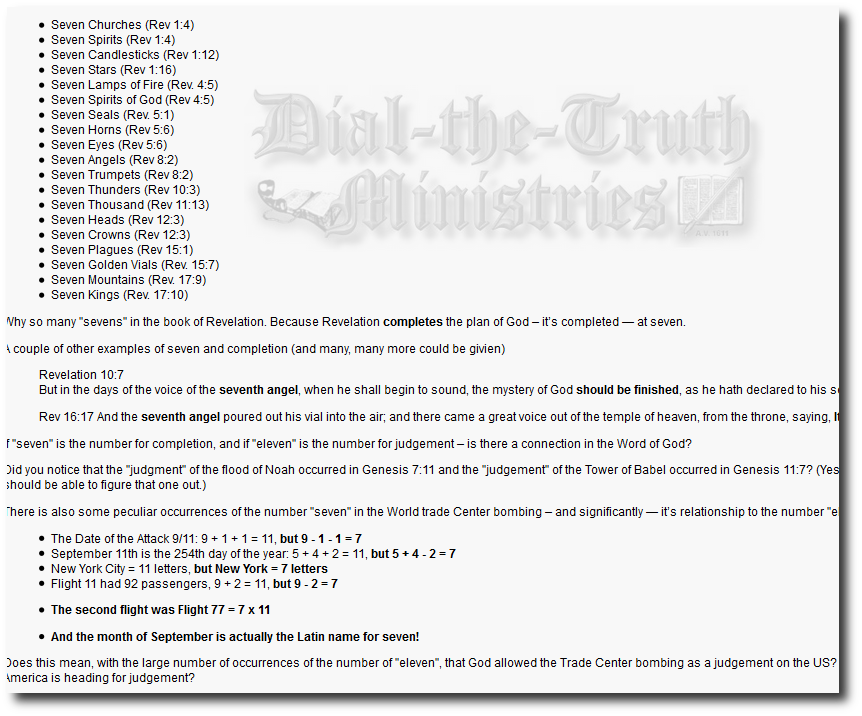 Read this excellent article about the number 11 and the world trade center bombing at av1611.org

More info on Numbers And The Bible

God has specific meanings for certain numbers. Several books have been written about the Bible and numbers, such as,

E.W. Bullinger, writes in his book, Number in Scripture:

“The question which we have to answer is--Is number used with design or by chance? Surely if God uses it, it must be with infinite wisdom and with glorious perfection. And so it is. Each number has its own significance . . . Numbers, . . . and their secrets, hold an important place in the words as well as in the works of God. . .” (E.W. Bullinger, Number in Scripture, pp. 20-21)

“If the Bible is an inspired Book as it claims to be, are not its numbers as well as its words inspired? One of its books is called ‘Numbers’. . . One out of every five Scriptures in the Bible contains a number. . .The Bible is a book from beginning to end that is built upon a vast system of numbers which is interwoven with the doctrines of the Word of God.“(Ed F. Vallowe, Biblical Mathematics, p. 20) 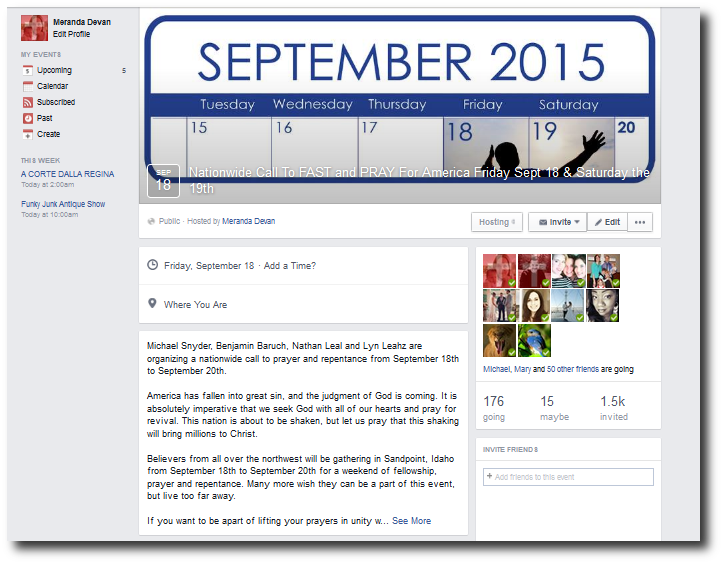 “We The People” can reverse the curse by repentance, so help us God, or we’ll soon be ravaged by weather and war. There actually comes a time, when we can longer to intercede for God to withhhold divine punishment from our leaders or nation! (Jeremiah 7:16; 11:14; 14:11).  Join us in praying and fasting on September 18 & 19th.  Join this fast by praying and fasting where you are.  Invite your friends and church to join in as well.  Go to the invite here.

Are you also having dreams with numbers, particularly, 7 or 11?  Please leave a comment below, and tell us about it.