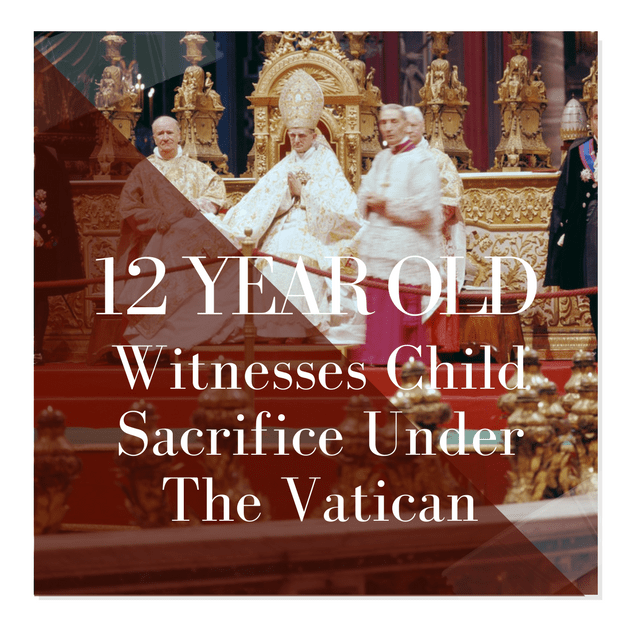 Svali is, or was, an American woman born into an Illuminati bloodline. When she was twelve years old, she was taken to the Vatican for a ceremony she was told would be very important. What she witnessed – an actual child sacrifice (the child was 3 or 4 years old, and appeared to be compliant) on an obsidian slab over a large pentagram in a basement catacomb – is told in her extraordinary interview with Greg Szymanski.

“I also, because I know that there are children being hurt in the group every day, and that’s my motivation for coming forward.I don’t like giving interviews for obvious reasons. I am willing this one time to lay aside my privacy and personal safety because these people need to be stopped. They need to be stopped.”

(Just an excerpt)  Read more at the link at the bottom

By the time I was a teenager, I was a youth leader, and by the time I was 22, I became the youngest member of Leadership Council in San Diego County . At that time I was a head trainer. I was the sixth trainer and eventually moved up to the second position.

SV: When I was twelve, I had mentioned with you the ceremony at the Vatican…

SV: …that they really do make all leadership in the group undergo at some point.

GS: Now basically when you were growing up, I remember you told me that you were instilled at a young age. You were born to a very wealthy, well-to-do family.

GS: You moved back to the States. You were told at a very young age you were special, you were “chosen.” Correct?

SV: Well, they tell everyone in the group that they are special and chosen, and that’s one of the things that made me very cynical when I was older. You will never meet a person who is an Illuminati who has not been told or programmed for years that they’re special, they’re the only one that can do things for quote-unquote “Family”.

But I was told, yes, I would do great things for Family one day. The reason why I can filter some of this with an objective view is that I know what my role in the group was. It was over quite a significant number of other people. So I don’t evaluate my role or specialness within the group so much by what I was told, but by what I did.

(regretful downturn in voice on “what I did”)

GS: So you reached the age of 12, and then you’re told by your parents you’re going to an induction ceremony in the Vatican.

GS: Can you tell us how that happened and what occurred at that ceremony when you went there?

When I was twelve, I was flown over to Germany. And I was at, I’ll call them the German Fathers’ house, over there. And, there was some preparation for a few days, beforehand, and I was told that there would be a very important ceremony. And it was considered a sealing ceremony at that point. And basically I was told a little bit about what I was expected to do during the ceremony.

When we got there, we went through the Vatican. Underneath the Vatican there is a large room that I described to you when we talked before. It has 13 catacomb chambers leading into it. And what they do is as you go down these steps into the room, you can see that it’s circular, so they’re all rounded. They bring out the mummies from the catacombs. And they set them beside each one [each of the 13 catacomb chambers], and they say “That’s the spirit of the Fathers watching over the ceremony.”

During the ceremony, there was a large table in the center of the room. It was on top of this huge golden pentagram. They had a ceremony there.

GS: So how many kids, how many other children were with you being inducted into the Family or the Order, as they call it?

SV: There were two other children at that point. But there were several adults too.

SV: See, the Church also brings in adults to swear their allegiance, too, just so you know. I was told, and I don’t know if this is true, that if you want to rise to a certain position within the Catholic Church hierarchy, you do have to go through that ceremony as well.

GS: Okay, so you’re down in this room. Your parents weren’t present.

SV: No. No. The German Father and the French Father were.

GS: Okay, and at that point tell our listeners what you witnessed.

SV: (pause, additional voice stress) Well, there was a table. It looked like dark glass in the center of the room. It was made out of a stone, but it was very shiny and darkened black. It may have been something like obsidian or onyx, I’m not sure. This was the only time I’ve seen stone like that.

Around the corners it had these gold channels that, you know, collect fluids. A little boy was placed in the center of the table and drugged. I think he was drugged, because he was very quiet. He didn’t move or say anything.

GS: This was a little three or four-year-old boy, right?

GS: Then they continued to do a child sacrifice.

SV: Yes, they did. Yes. I told you about that before. Yeah.

GS: Now afterwards, quite, what an unbelievable experience for a youth, a 12-year-old. What went through your mind when that happened?

SV: I was terrified! I mean, I was absolutely horrified. I… I… I… I can’t describe the terror you feel when you go through something like that.

GS: And do you remember the words they were saying as this was going on?

SV: (pause) The man was in scarlet – he was speaking in Latin. And basically he was saying, “Please accept the sacrifice on this day.” And then he said, “This sacrifice will seal the ceremony.” And then he did it. 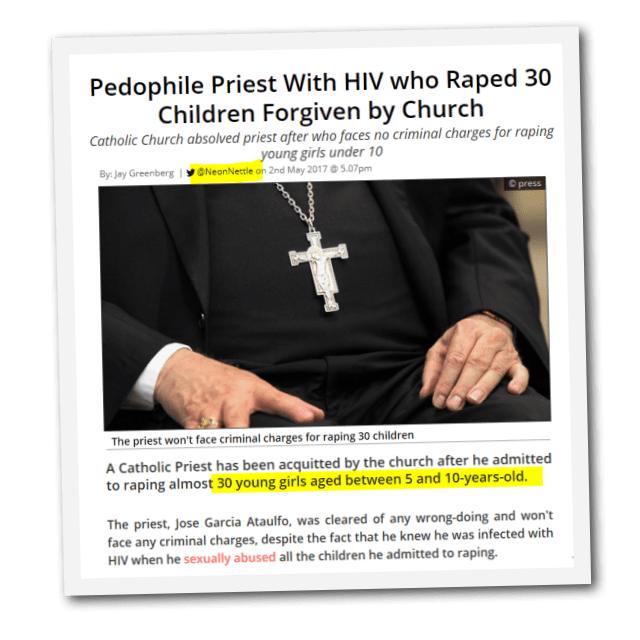 The priest, Jose Garcia Ataulfo, was cleared of any wrong-doing and won’t face any criminal charges, despite the fact that he knew he was infected with HIV when he sexually abused all the children he admitted to raping. The mother of one of the priest’s victims wrote a letter to The Pope asking to meet with him in Rome to discuss the case, but was shunned by the Vatican who declared that “the matter is closed”.

What CHRISTIANS Need To Know About Pokemon Go