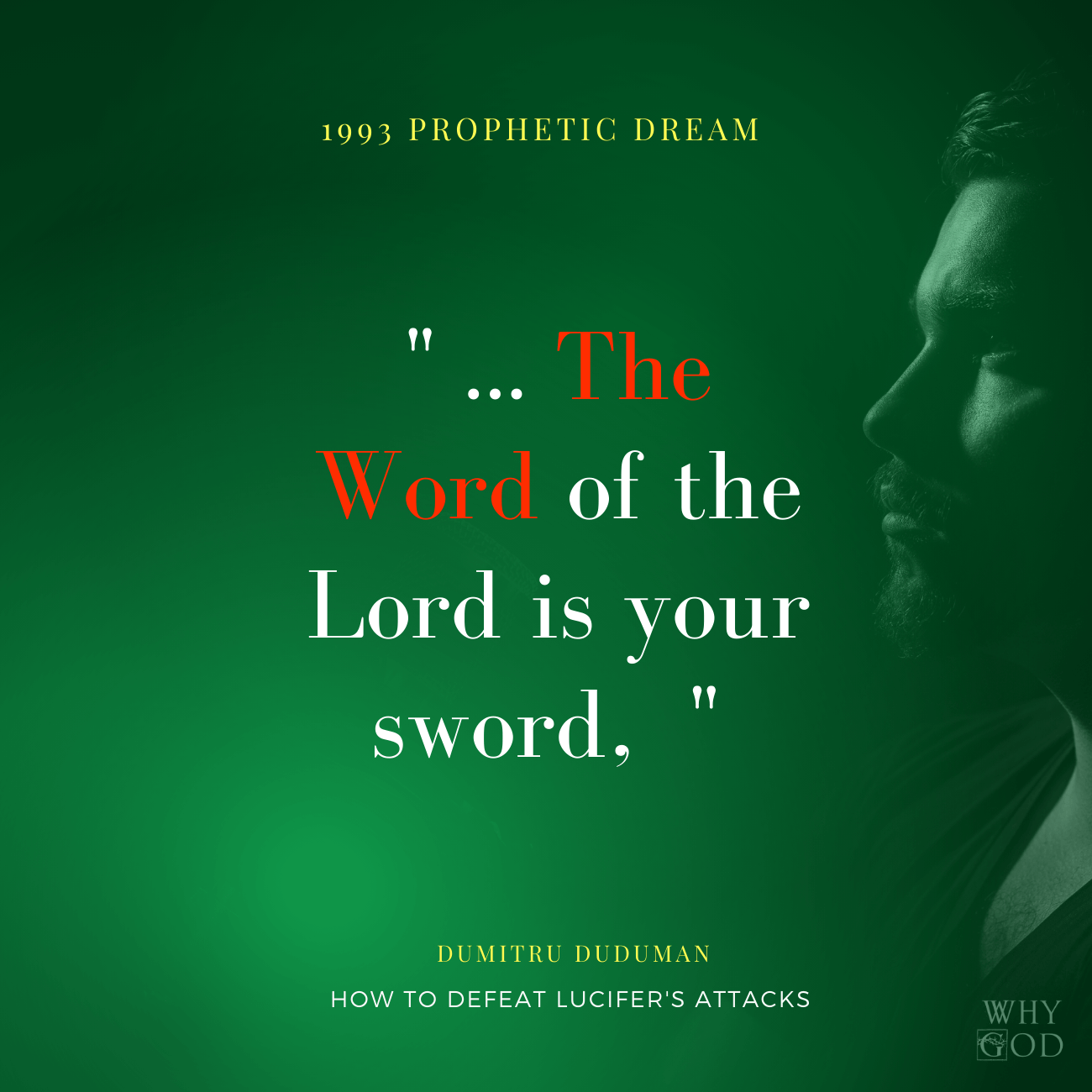 One night, while in Oregon, I dreamed the sky was getting dark. Then suddenly it turned pitch black! It was as if the whole world had gone dark at that moment! All the people were in a frenzy! They became disoriented, and some were even screaming. After some time, we heard the sound of an army approaching. Soon, we saw them coming out of the black mist. All were dressed in black, except one. That one seemed to be their leader. He was dressed in a red robe with a thick black belt over his waist. On his head, he had a sign. As I looked, I saw that in his hand he held the same kind of sharp spear as everyone else in his army.

“I am Lucifer!” he exclaimed. “I am the king of this world! I have come to make war against the Christians!”

It looked as though all the Christians were huddled together in one big group. Some began to cry when they heard this. Others began to tremble, while some just stood without saying anything. Lucifer continued to speak. “All of those that want to fight against my army and think they can be victorious; go to the right. Those that fear me; go to the left.”

Only about a quarter of the group stepped to the right. All the others went to the left. Then Lucifer ordered his army, “Destroy those on the right!”

The army began to advance and quickly surrounded the Christians on the right. As they began to close in on us, a powerful light appeared and encircled us. Then, an angel of the Lord spoke. “Take out your swords and fight. Defend yourselves and be victorious over the enemy.”

“What swords?” A man in the group asked.

“The Word of the Lord is your sword,” the angel answered. When we understood what the angel meant, we began to quote verses from the Bible. Then suddenly, as if we were one voice, we began to sing a song. Our voices thundered so loudly, that the Dark army began to retreat in fear. They did not have the courage to come against us anymore.

Lucifer, then filled with rage, turned to those on the left. “You, who all of your life have been trying to please two masters, because you could not stand against me; I have the power to destroy you.”

He then ordered his army to attack. It was a total massacre. The ones on the left could not defend themselves. One by one they all fell. This killing seemed to go on for a long time. After a while we could actually smell the stench of the dead.

“Why could they not be protected also?” someone asked.

The angel answered: “Because all their life they have been lukewarm. Because of their hypocrisy, the true church has been blasphemed. They have brought disrespect to the word of God. They were not clean.”

As we continued to look, we saw the sun coming over the horizon. The black clouds began to break up. Then they disappeared. Only one was left – on which Lucifer and his army stood. Lucifer looked at me shaking his fists and said, “I will destroy you even if I have to throw my spear at you from here!” Then that cloud disappeared too.

As I looked around I began to see faces that I recognized among our group. I saw a pastor from Bellflower – another from Indiana – one from Michigan – as well as many of my American friends. This strengthened me greatly. Then I awoke. The first thought that came to my mind as I awoke was that this had been the last fight of the devil against the church. If we remain faithful, we will be victorious.

Speak the Word of God! Doing so transforms your voice into His voice!

It may “feel” awkward at first, to speak God’s Word out loud in the presence of others. Don’t let that stop you! Don’t be ashamed. Those “feelings” were likely put into you by a demon hoping to get you to back down and not give voice to what they hate.

But you can’t give to others what you do not have. That’s why I keep banging the “Scripture memory” drum!

The devil does not pull up a chair and wait while you go and find your Bible to search for a verse. Without God’s Word “in your heart”, you are like a soldier being shoved into an intense battle zone with no training, and thus without a clue as to how to use the weapons of warfare. And believe me, YOU ARE IN A BATTLE

We access the power of God’s Word by speaking His Word!

When the devil tried to tempt Jesus after His forty-day fast, here’s how Jesus responded (emphasis mine):

The Temptation of Jesus

4 Then Jesus was led up by the Spirit into the wilderness to be tempted by the devil. 2 And after fasting forty days and forty nights, He was hungry. 3 And the tempter came and said to Him, “If You are the Son of God, command these stones to become loaves of bread.” 4 But He answered, “It is written,

“‘Man shall not live by bread alone, but by every word that comes from the mouth of God.’”

5 Then the devil took Him to the holy city and set Him on the pinnacle of the temple 6 and said to Him, “If You are the Son of God, throw Yourself down, for it is written,

“‘He will command His angels concerning you,’

“‘On their hands they will bear You up, lest You strike Your foot against a stone.’”

“‘You shall worship the Lord your God and Him only shall you serve.’”

11 Then the devil left Him, and behold, angels came and were ministering to Him.

I don’t want to move on without calling your attention to the fact that the devil waited until Jesus was at His weakest point, having fasted for forty days, when he made his run at Jesus. That’s the way devils operate. They are bullies, and bullies exploit us at our times of greatest weakness.

In that passage, Jesus demonstrated for us how the spoken Word has power over temptations of the devil!

Do you realize how awesome and how important that is? You speak an appropriate Scripture passage, and in so doing put the lie to whatever the devil is trying to get you to believe and act on.

Read more of this article here