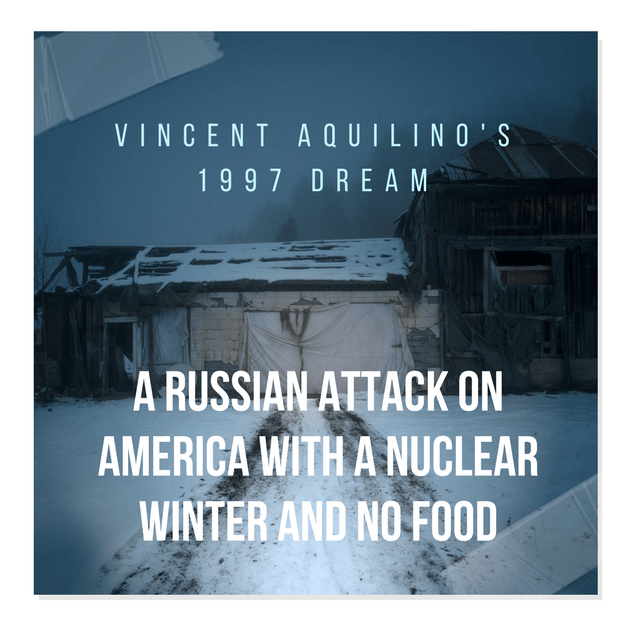 I received this dream a few years ago. I cannot tell you with certainty that it was from the Lord. But I can tell you that I still remember it as vividly as the night I received it. I have not shared it to this point, but I now feel that, with worldwide circumstances the way they are, it is appropriate. It is your job to judge this against scripture (be Berean) and to hold on to what is good and to reject what is false.

“Surely the Lord God does nothing, unless He reveals His secret to His servants the prophets.” (Amos 3:7)

I was downstairs trying to tune in the radio. My father-in-law came down the stairs and asked me what I was doing. I told him that I was trying to find some information about something that had happened. I shook my head and said I didn’t understand why I couldn’t find out anything about what had happened. Whatever it was, it must have happened far enough in the past that it was no longer news.

Then I spoke with my wife and decided to go out and get some groceries. A friend, whom I did not recognize, came with me. We went outside, but instead of getting into the car, we walked pulling a wagon behind us. We got to the first corner, where there was a menacing crowd. We ran back into the house to get a rifle. We then were able to go down the street.
We came to the first store. There was nothing on the shelves. We continued down the street to the next store. There was nothing on the shelves. Then we came to the third store. There were just a very few items on the shelves. Again I wondered, what has happened? I didn’t understand.

We then went home. I sat in the dining room, gazing at the snow, shaking my head and muttering that it was not supposed to be snowing.

Finally I called out to the Lord in anguish. Lord, what has happened? The Lord answered me: The Russians had launched a pre-emptive strike against the Missile silos in the MidWest [it was apparently a limited exchange]. They had taken out the missile silos. But our submarines counter-attacked. I was even told the death counts: 6.8 million Americans and 4.6 Million Russians dead.

I flashed to my wife. She had developed a rash or something of the sort. She was worried about radiation. But then an angel appeared and said not to worry, that “??????” (it was a technical name that I did not understand) would take care of it. I told the Angel I did not understand the term. The angel said that “Retin-A” would take care of the problem and not to worry.

Then I was in the dining room again, looking at the snow coming down in summer, shaking my head and saying that was not supposed to be happening.

This was the end of the dream.

Considering the nearness of the Ezekiel 38 confrontation and the likelihood of some sort of exchange between Russia and the U.S. I thought it appropriate to share this at this time. If the dream has no prophetic significance, then all that would have happened is that you did some extra praying and sought the Lord’s guidance on how to prepare spiritually, mentally and physically. If it is correct, then the Lord has warned us in accordance with Amos 3:7.

In any case, DO NOT FEAR, but trust Jesus.

Note: 1) The dream had my father-in-law in it, but not my mother-in-law. She went to be with the Lord last February.

Note: 2) I was surprised a few months ago to come home and find tubes of “Retin-A” sitting on my wife’s dressing table that her Doctor recommended she try for a skin condition.

Protection For His People In The Coming Invasion- Mena Lee Grebin

“You haven’t seen anything yet- The Russians are coming.” Lindsey Marceau’s Prophetic Russian and Chinese Invasion Dream