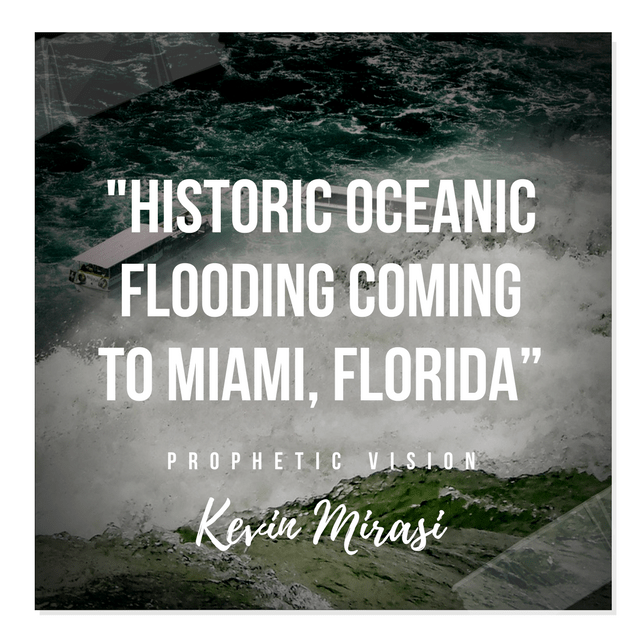 Over One Year ago, on July 2016, I shared what I stated as Follows: ‘“In a vision, I saw written “MIAMI”, as I saw Oceanic Flooding occasioned by a Historic Tsunami (Hurricane).”’

The Most Ferocious and the Biggest ever recorded Hurricane on the Atlantic Coast is headed to Miami, Florida and other environs: Hurricane Irma. It looks like the Flooding of Florida (Including Miami) is absolutely inevitable, in a matter of days. A State of emergency is already declared for the State of Florida (Miami included).

In July 2016, I saw in a Vision (Supernatural Dream) of The LORD, what I Titled as follows when Posting and Sharing forth The Prophecy of The LORD, over One Year ago on July 2016: ‘“Historic Oceanic Flooding Coming To Miami, Florida.”’

May The People of Florida (and the Caribbean Nations on the path of The Hurricane Irma) endevour to Perch on The Rock of Ages (Jesus Christ The Messiah). It is always well in Him. Be Wise and Seek The LORD for Protection. These are the days of Roaring of The Sea, and the Bride of Christ is always Reminded that when they see such, they should know that their Redemption has drawn Near. The Key is to embrace Repentance for the Forgiveness of Sins through The Blood of The LORD Jesus Christ and thereby walk in Righteousness and Holiness.

Luke 21: 25-28 ‘“And there will be signs in the sun, in the moon, and in the stars; and on the earth distress of nations, with perplexity, the sea and the waves roaring; men’s hearts failing them from fear and the expectation of those things which are coming on the earth, for the powers of the heavens will be shaken. Then they will see the Son of Man coming in a cloud with power and great glory. Now when these things begin to happen, look up and lift up your heads, because your Redemption draws near.”’

Daniel 12: 1 ‘“At that time Michael, the great prince who protects your people, will arise. There will be a time of distress such as has not happened from the beginning of nations until then. But at that time your people—everyone whose name is found written in the book—will be delivered.”’

Your Brother in Christ Jesus Christ, and a Shepherd of The LORD,

I DON’T KNOW WHETHER SOMETHING WORSE IS COMING, BUT THIS IS WHAT I SAW COMING TO THE U.S.A ONE YEAR AGO:

Looking at what is happening in Texas (and the State of Lousiana), U.S.A, with a devastating Historic Flooding that has occurred (like Never before seen Flooding in U.S.A), with large swaths of Land under water (following the “Monstrous” & the Historic Hurricane Harvey), and people Running to Emergency Camps (managed by F.E.M.A etc), I can’t help thinking of what The LORD showed me One Year ago, in September 2016 which I titled as follows: ‘“Prophecy of a Historic Distress Coming to The United States of America, Leading to a Very Massive Flooding of The Land, Leading to Food Crisis and People Going To Assistance and Emergency Camps”’

Perhaps, this is just the beginning of such a distress. For I even saw so much worse Flooding coming to U.S.A. For I also stated as follows: ‘“I see people from other Nationalities planning on how to leave The United states of America and to go back to their Original Countries. I hear them calling upon their national Governments to come and airlift them to their Countries of Origin from The United States of America. I see some nations airlift some of their citizens from U.S.A. I see people from outside of U.S.A cooking food and taking to the victims in The United States of America.”’

So, Yes, Much worse is coming to The United States of America, and yes indeed the other Nations as well. For these are the days of Distress, such as has not been across the nations. But at that time (this Time) All those whose Names will be found written in The Book of Life will be Delivered into Heaven, through The Rapture of The Bride of Christ.

Daniel 12: 1 ‘“At that time Michael shall stand up, The great prince who stands watch over the sons of your people; And there shall be a time of trouble, Such as never was since there was a nation, Even to that time. And at that time your people shall be delivered, Every one who is found written in the book.”’

===== ‘“At that time Michael, the great prince who protects your people, will arise. There will be a time of distress such as has not happened from the beginning of nations until then. But at that time your people—everyone whose name is found written in the book—will be delivered.”’