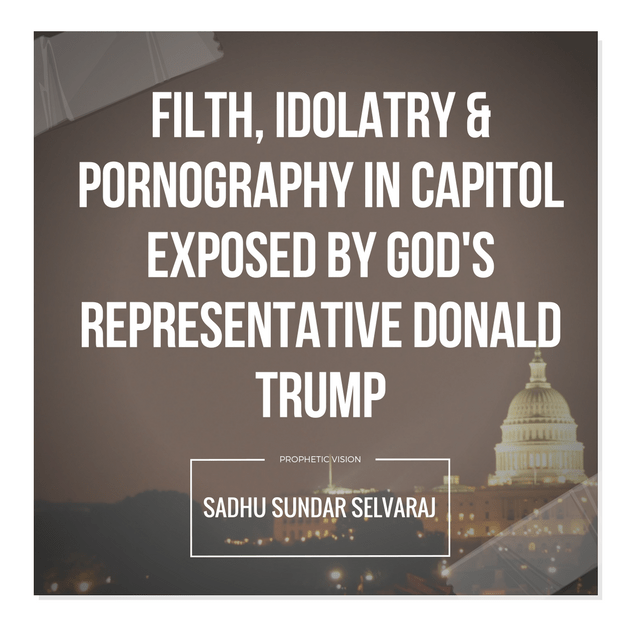 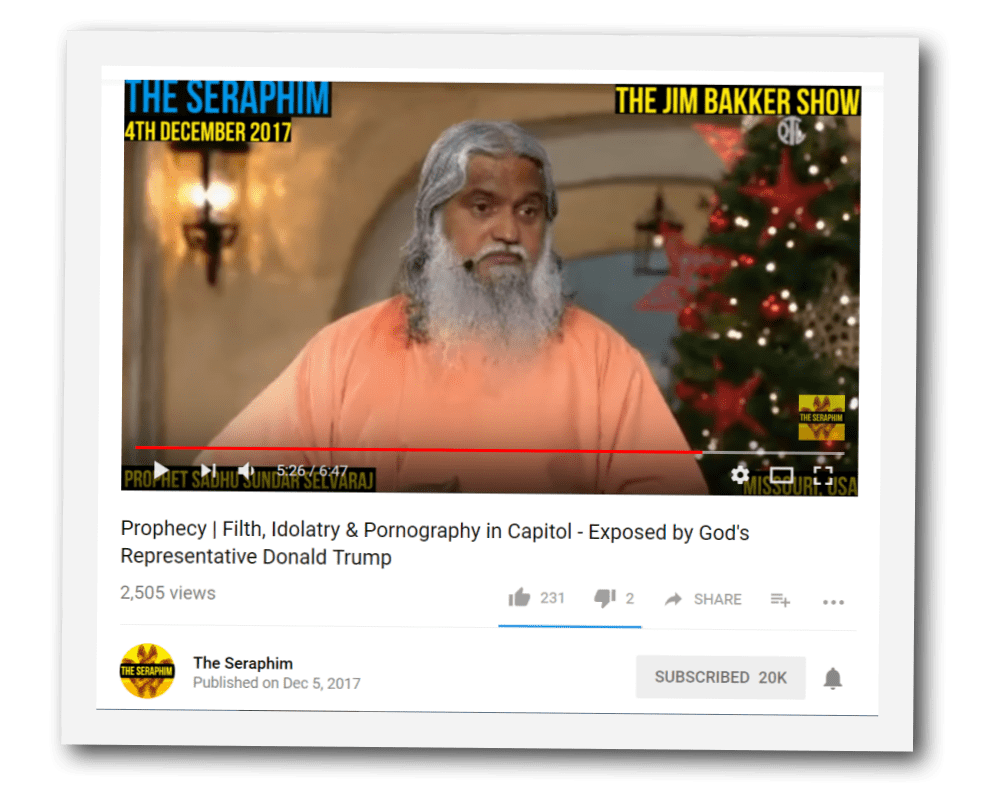 Below are the words of this video where Sundar describes this vision: 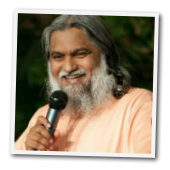 The word of the Lord came unto me this evening concerning the US.  The Lord said quite sternly.  He said go and tell them this:

The Lord God had put Mr Donald Trump in the office as a president to shake this nation.

So he is a representative of God.  God is going to shake this nation.  How is He going to do that?  When shaken……!  You know when you have a cup of a drink, and you shake or stir something, the things that lie hidden underneath, they all come to the surface.  Right?  So God put Mr Trump in your nation, to shake this nation.  The things that were hidden underneath for so long.  Your politicians will be (missing).  The politicians that have been sinning.  Your corrupt politicians, they are now being exposed.

Recently these are the things that have been taking place in this nation, right?

Two years ago, I was invited to speak at a church in Maryland in a city called Westminster. As we were driving from the airport to the city, I was just praying all along the journey.  It was nighttime.  Suddenly I saw the capital hall before my eyes.  I saw it with my open naked eyes.  I always marveled at the architecture of the capital city, the capital hall.  I like those colonial architecture.  I saw this hall all lit up.  It looked so marvelous.  I asked the brother that was driving me ……look the capital hill looks so nice.

Only then I realized I was seeing an open vision.  So I wondered why God allowed me to see the capital building that night.  I came to Westminster and I was put in a hotel and the meetings were to begin the following day.  I was praying the following morning.  As I was praying the Lord Jesus came to me.   He said …..come lets go to the capital hall.

The next minute my spirit was taken out of my body and together with the Lord Jesus, we walked beside the capital hall.  We stood outside and the Lord Jesus said ..…we will not enter in because there are lots of filth and corruption inside the hall.

I knew that is where your parliament gathers.  Am I right?  So your senators are there, the congressmen are there and the Lord Jesus said ……….we will not enter in.

So much filth and pornography goes inside there, so much immorality goes on there and they pretend to be good lawmakers fooling this nation.

Then we walked along and we came before the Whitehouse.  The Lord said …...come lets go inside.

See, when you have a righteous leader, righteousness will spring forth by the land.  If you have a corrupted leader, evil will come on your land.  Now this was in the past.  Now you have a new president.  This is the first year of his presidency.  In the first year of his presidency he is correcting many wrongs that have taken place in the last 8 years.  Am I right everybody? He is correcting many wrongs. Secondly, because of him there, God’s representative, it opens the door for God to work in your nation and expose corruption.  Expose immorality that is taken place in Capital hill.  God is using Mr Trump to shake this nation.