As I was reading the book, I came across a prophecy given by David Wilkerson in 2008.  He states, “Ten years ago, I wrote a book entitled, America’s Last Call:  On the Brink of a Financial Holocaust.  In that book, I warned of the following events . . .”  Wilkerson goes on to talk of the meltdown of the bond market;  a brief, false sense of prosperity; a real estate meltdown, etc.  And then, he mentions what we are beginning to see today:  “There would be an ominous rise of homosexual power.”

A few days ago, I was looking for a book in my library, and I came across the book by David Wilkerson mentioned above.  This prophetic book was written in 1998, and within its pages is a chapter entitled, “The Ominous Rise of Militant Homosexual Power” (emphasis added).

Christian, do not listen to the false prophets, pastors, and teachers who are telling you that everything is going to be all right in America.  They are liars and deceivers.  Judgment is coming to America like we have never seen before, and Christians will not escape.  Christians will be affected by the judgments that are coming.  God is calling Christians to repentance, and especially repentance from believing the false prophets who are prophesying “peace and safety,” and accusing the true prophets of being nothing but “doom and gloom” prophets.

As Israel of long ago was on the brink of judgment, God raised up the prophet Jeremiah to warn the people of coming judgment if they did not repent.  Jeremiah was not received by the hierarchy of his day, just as many of the so-called “doom and gloom” prophets are not being received today.  Jeremiah was slapped in the face by Pashur, a false prophet and chief leader in the house of the Lord.

Not only did he slap Jeremiah’s face, but he had Jeremiah thrown in jail for prophesying such doom and gloom.  “The religious leaders, priests, and prophets were all telling the people that good days were ahead, a time of national glory, success, peace, and endless prosperity.  And they borrowed their soothing messages from one another, encouraging thousands with their lies.  They went about prophesying their nation and people would not suffer destruction” (David Wilkerson, Set the Trumpet to Thy Mouth, p. 22).

Do these lies propagated by your religious leaders, priests, and prophets sound familiar?  If they do, you might consider getting out of the church where you are hearing such lies!  Do not let them put you to sleep!  It just might be permanent, a permanence that will have catastrophic results for you and your family!

Recently, the Lord gave me a five-part dream.  In one of the parts, I was in a small church.  As I watched, I saw people leaving one person at a time until almost no one was left in the church.  I then heard the words, “Lights out!”  I knew that the Lord was telling me that these words had a double meaning.

He told me that He was beginning to call His people out of the churches that were lying to them (Lights, out!).  He was calling the lights out of these churches.  As the lights left these churches, those left were sitting in darkness, not realizing that the lights were out!

I then saw churches, great and small, closing their doors all over America.  I knew that “Ichabod” was being written across the doors of these churches.  The glory of the Lord had departed.  Why?  The Lord spoke to me that because people are not being warned to depart from their sins – especially fornication and adultery in the church – He was pulling out the lights from and putting out the lights in the churches in America.  Again, some people would not even realize that they were left sitting in darkness!

When was this dream given?  August 16th, two days before the hackers released the names of 37 million customers of the Ashley Madison website.  Coincidence?  Believe what you want to believe.  My personal belief:  judgment is falling, and judgment is beginning at the house of God.

Christian, this is a warning.  How many more warnings will God give before even He is silenced?  Time will tell.  All I know is that we better heed these warnings.  God is not going to let one prophetic word spoken by David Wilkerson fall to the ground.  They will continue to come to pass.

The lights are going out in the churches around America, and many people are going to be left in the dark.  The Good News is that those who are walking in the light are being called out of the whorish Babylonian churches in America that refuse to repent.  Hear the word of the Lord, “Come out of her, My people, that you be not partaker of her plagues.”  Judgment must begin at the house of God!  If you judge yourself, you will not be judged! 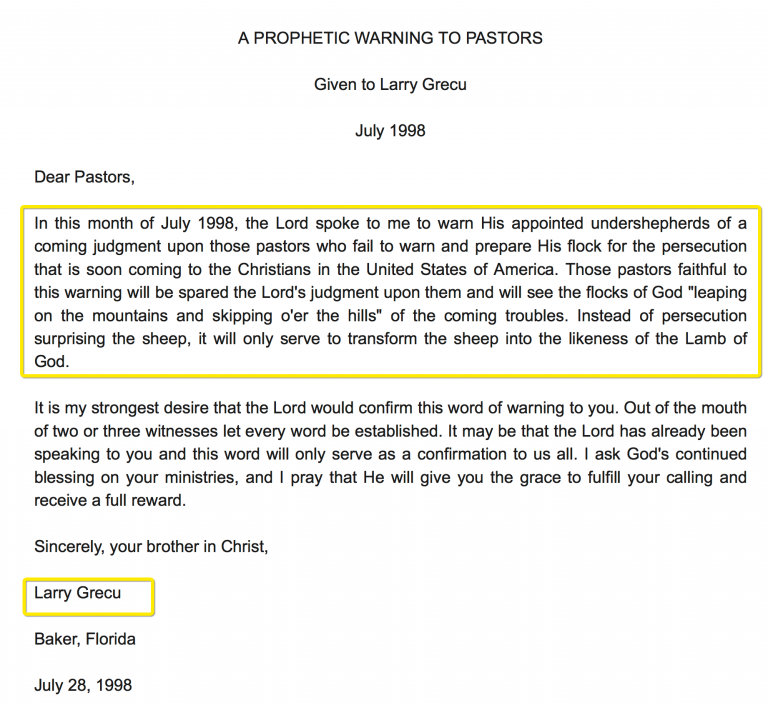 ” Warning To One Crestview Pastor!”

Recently, I gave a local Crestview pastor a copy of the pamphlet I wrote regarding storing food and a cd copy of a radio interview with Mena Grebbin on Rick Wiles radio program Mrs. Grebbin tells of a dream and an angelic visitation she had regarding storing food. If you haven’t heard her interview, I would strongly encourage you to do so before it is too late. Anyway . . .

Much to my surprise, I found out that the pastor has not shared this information with his congregation, and pretty much, the congregation is asleep as to the possibility that it might be a good idea to store food and water. Well, folks, here is what is going to happen. I am quoting from Jeremiah’s book of Lamentations, chapter 1, verse 19: “I called for my lovers, but they deceived me: my priests and mine elders gave up the ghost in the city, while they sought their meat to relieve their souls.”

There is coming a famine in the land! And, both priests (your local pastors/apostles and so-called prophets) and the elders (the church board/”yes” men) are not going to be able to help you. Why? Because they will be dying in the streets while trying to find food to feed their own families! Is this doom and gloom? Well, not if you store food and water – enough for the next few months. Of course, you might want to store some for your pastors and elders. From the sounds of what Jeremiah said – you know, the doom and gloom prophet of his day – they are going to need it!

By the way, this church pastor I mentioned above is all into revival. But, he needs to listen to what the Lord spoke to Pastor John Kilpatrick after 9/11. Brother John asked the Lord if revival was over for the United States. The Lord told him that it was NOT over. BUT, He said that the revival that was coming would be in conjunction with end times events. In case you don’t know what those are, check out Matthew 24!

Jesus was the Prophet who warned that in the last days there would be famines (He was such a doom and gloom-er!) In my Bible, I read where a prophet showed up at church one day and told the people a famine was coming. This happened in the early Church. You know what the Church did? PREPARED! They weren’t out there praying in tongues, binding the devil, and singing “I’ll Fly Away”! They were preparing.

Most of us who are urging people to prepare are being told that we don’t have faith if we prepare or that we are moving in fear! Our accusers need to read Hebrews 11:7. Of course, if you want to go ahead and believe our accusers, if you are going to depend on your pastors, prophets and elders, good luck! You are going to need it.

Folks, it’s time for you to read your own Bible and make your own decisions for the sake of your family, friends, neighbors, and even your enemies. Go ahead and accuse me of anarchy in the church! I don’t care. For the pastor who does not warn his church to prepare, for the church member who sits in the pew and lets the pastor tell him what is right and wrong, here is my warning. You will be listening to the screams of your congregation and your fellow church members as they perish along with you in the streets of your local city (Lamentations 1:19). Read that Scripture again if you dare! In fact, take the time to read the whole book of Lamentations today. It just might be the wakeup call you need!

is for d-day – prophecy being fulfilled right before our eyes!

PROPHECY BEING FULFILLED RIGHT BEFORE OUR EYES!: A …

PROPHECY BEING FULFILLED RIGHT BEFORE OUR EYES!: WHAT …

Jun 26, 2015 – Just Some of My Views of What Will Happen as a Result of Today’s Supreme Court Decision in Favor of Same-Sex Marriage. Larry Grecu Baker …

do you know the gospel? – prophecy being fulfilled right before our eyes!

Apr 22, 2015 – A SAD TESTIMONY THAT IS SO SIMILAR TO THE CONDITION OF CHURCHES TODAY IN THE UNITED STATES! Larry Grecu. Baker, Florida.

PROPHECY BEING FULFILLED RIGHT BEFORE OUR EYES!: D IS …

Jul 31, 2015 – To the African-American Community in Crestview, Florida: A Prophetic Message Just for YOU! Larry Grecu Baker, Florida July 31, 2015.

PROPHECY BEING FULFILLED RIGHT BEFORE OUR EYES!

persecution coming to christians in the united states – prophecy being …

winning the lost, the book of jude, and the acts of the apostates