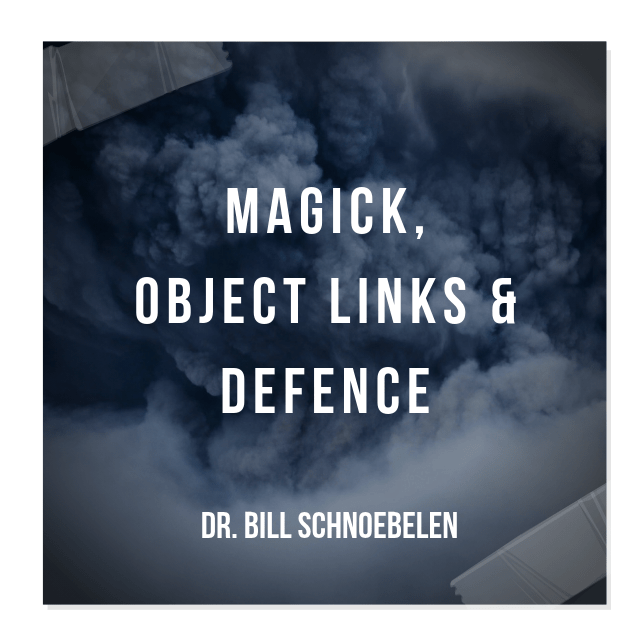 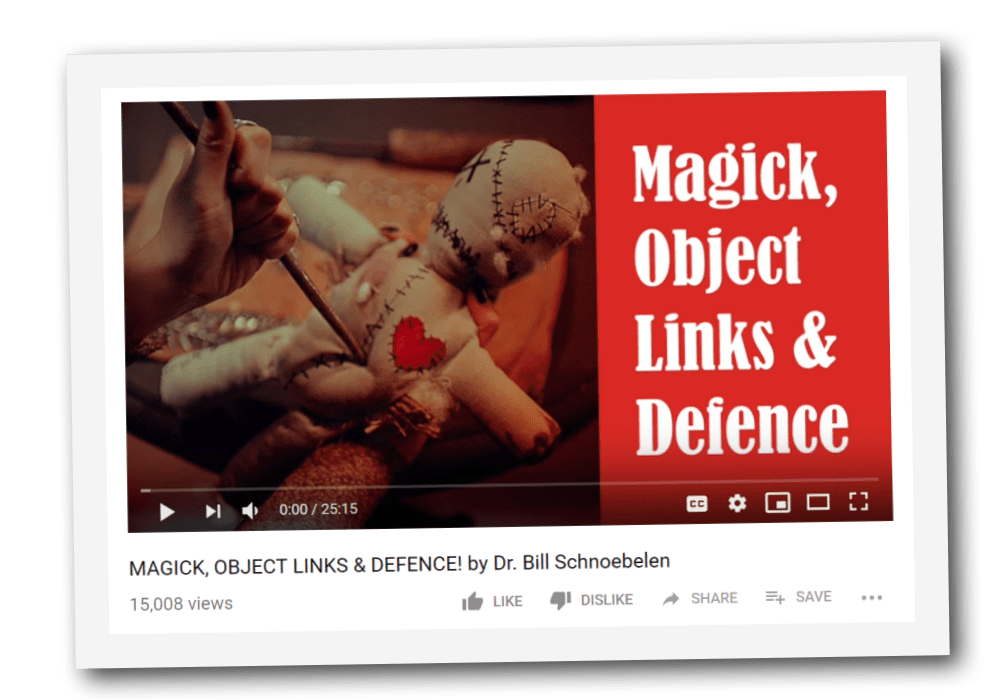 VOICE Notes from this video:

Today we’re going to be talking about sending is not not well understood in the body yet.  I think it is something that people need to understand because it can be causing open doorways into their lives. And that is the idea of the object link.

Now what on earth does that mean? Well, this is important tactical information for believers. Because without understanding is you may be leaving yourself open to certain kinds of attack. Because is literally every day we get people calling us or emailing us or whatever, because their homes are under attack their children under attack, and so on. And this is one thing you can do as a believer to protect yourself and your home and your family is to understand what an object link is.

There is a belief that if you’ve especially something you’ve had, for a long time, it’s important to like, say, a piece of jewelry, a wedding ring and article clothing,a piece of your hair, or fingernails, something of that nature that’s that’s kind of intimately a part of you that that can be used as a link to you. So in other words, if someone wants to curse you, or whatever, and they have acquired some of your hair or an article of your clothing or piece of your jewelry that they believe they can use that as a channel to get past your defenses and crush your soul. And let me give you an illustration of this back.

When we were in the occult,somebody stole my wedding ring. Now, obviously, there are very few pieces of jewelry that will be more you know, intimately connected with somebody then their wedding ring because, you know, typically you usually wear those things almost constantly. Anyway, this this guy stole this ring, and then used it to curse me.And believe me, it was rough. And of course, back then I was not a believer,and I nearly died because there was this channel, this link between me and this guy that was the sorcerer that is trying to curse us. And it was not a good situation. I think really was only because of the allied His grace and His love for me in His for knowledge, He knew I was going to get saved and serve Him that He kept me from literally being killed.

We tell people, you know, bless your whole cleanse your home, get rid of all possible, you know, idolatrous object, stuff like that. And they were still getting bombarded. We told the remit the sin of the shedding of innocent blood over the land…. still didn’t help

Spirit spoke to us and said, someone has somehow gotten their hands on the pair of the what, the wife’s undergarments. Now that sounds kind of weird, you know? And we said, Would you mind just going, you know, or in the person’s home, would you mind going and just look in your, you know, dresser and see if they’ve got a missing, you know, pair of undergarments. And so she did. And yeah, she did. She had no idea where they were. But But she didn’t have a cleaning lady that would come in, and then recently come into, what do you want to call it ….had a falling out because she believed she had caught the woman stealing something. And so she fired her. And of course, obviously, the woman had stolen something for sure. Because these these, these undergarments were missing. And so we asked her to sit down with us and pray and take the sword of the rock and sever any object links between um, any article of clothing or anything at all, because we had no idea what else as well in mind, I’ve gotten and this woman and her family and we did and guess what the attacks stop. This is the power of the object link.

And we’re gonna explain why this is the case in a few minutes. Because I know right now the sound kind of weird and either a casualty or science fiction.

But is it scriptural? Well, let’s find out.

Now, here’s the thing the Torah reveals, hear me carefully. The Torah reveals that your soul can touch thing, not just your body, but your soul during all that, listen to this, if you go to Leviticus five, verse two, we read this or if a soul touch any unclean thing, whether it be the carcass of that unclean beast. The word there is the , which is the Hebrew word for our lower soul are, you know, the, the vital force within us, and you might say, well, that just poetic language. But mind you, this is in a book of laws, you know, if this is in the Psalms, it might be different, because the song is obviously poetry. And there is a little bit of poetry in the Torah, like the song of Moses, and the song, Miriam and so on. But mostly, especially in Leviticus, Numbers, Deuteronomy, you find almost entirely laws. And this is a spiritual teaching, that if a soul touches something, not just the body can be made unclean by doing that, but the soul as well.

So if your soul can be, if you will, and let me explain something here, there are, you know, two different words in Hebrew for your body. There’s the word which sorrow and unfortunate word in English, but it’s, it literally means your body, you know, when we say the word body, usually the Hebrew, it would be goof. And the other word, which you find also used in the scriptures is bizarre, which means flesh.

And it can be as both in terms of like, maybe you’re eating something, but also in terms of you talking about your physical body and fat when it says that when a man and a wife come together, they are bizarre, a hot they are one flesh. So if the scripture there, and in the chapter I just read, why does it say if a body touches something that me personally, I’ll do that, but it didn’t, it said, soul incentive enough fish touches something unclean.

So if you’ll, if you’ll pardon me for saying this, I think we can deduce from that that somehow rather when the soul touches something, it can indeed form a attachment to it, a link to it, especially when something is that has a value that the person is used, a lot of, they became emotionally attached to it likely get a wedding ring, or you know, something of that nature.

You see this same kind of language in Leviticus 7:21, Leviticus 22, , and …… Not only your soul touch things, but your soul can be made unclean by touching things. There is real spiritual power in the touching of things if you for example, have you read in Exodus 2937 we see this is talking about the altar

And you see, this is why when you have even if you’ve had a breakup, if you had a divorces someone, you still feel something and then it may not be entirely wholesome, and the other individual might be able to affect you through evil eye or evil speaking, or curses. I mean, it’s not been a known for, even among Christians, for people to break up and have real anger and rage towards one or for whatever reason, and this object linked is quantum entanglement can facilitate this transmission of evil of evil thought of evil, speaking of even demonic power through this link into the other individual.

So if you are in the middle of a spiritual battle, and you don’t really understand why you’re not getting all of victory, and might be because of these object links.

People often ask us, for example, why, let’s say again, you’ve broken up with someone, you’re divorced from someone, but they admit that this individual can still get to them can still manipulate them can still yank their chain and a PR some of this is emotional, but a lot of it is spiritual and solace. And it’s an object link that you can pray and you can break hallelujah.

We advised hundreds of people over the years that if you are again in some sort of a situation where you think you may you may have this kind of a problem and you’re praying and you’ve done all the other stuff you’ve gone through deliverance you cleanse your home you resist shedding of innocent blood and yet you’re still not getting the victory.

These object links can be with your with your own articles of your life they can even be with documents you signed because you’re saying that you’re is a part of us spiritually if you signed a deed or a check or credit card receive that’s why when we go home after shopping or whatever we always pray and break any any you know plead the blood of you who showmanship over any object links and been created by contract or checks or credit card receipts or anything like that. And we’ve got other teachings on this in greater depth.

But it’s it’s very powerful to do that because it keeps the enemy away from your door. And in this day and age when the enemy is so powerful and wants to go after set apart believers. You need to know how to take his foot out of your door and slam the door in his ugly face. Hallelujah. And seal that door with the blood of the Lamb shed on the cross of Calvary and he who she was mighty name Oh man. Okay, thank you. I pray this has been a blessing to you. I pray that you will take this and share this with others. Subscribe if you’re not subscribed to this video and just go forth in victory and Messiah. Please also pray about supporting our ministry give we’re entirely a faith based ministry.