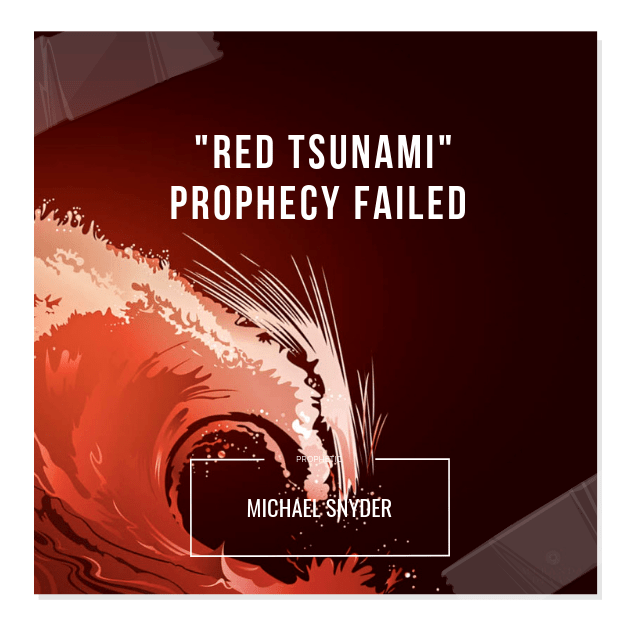 The truth about Mark Taylor has finally been exposed.  Over the past two years, “fireman prophet” Mark Taylor has been catapulted to international fame for supposedly “prophesying” that Donald Trump would become president.  And once Trump actually won, millions of people were convinced that Taylor had actually gotten a message from God.  A book was quickly published and a major movie about his “prophecy” has just been released.  But Taylor’s “prophetic word” was actually a failed prophecy that Trump would become president in 2012.  By Taylor’s own admission, he thought that he had “truly missed it”.  And even though he had no previous track record of prophetic accuracy, he was able to recycle his failed prophecy for the 2016 election and he got incredibly lucky.

But luck always runs out for false prophets, because they get greedy.

Prior to the 2018 midterm elections, Taylor decided to go for it again, and this time he told everyone that the Lord was showing him that a “red tsunami” was coming…

CBN News spoke with Mark Taylor, author of the popular book The Trump Prophecies, about the prophetic outlook surrounding these elections.

You can hear Taylor talking about the “red tsunami” during interviews right here and right here.

Obviously there was no “red tsunami”, and so that leads us to a couple of inescapable conclusions.

Number one, Mark Taylor was wrong.

And Mark Taylor is not the only one.

I again looked and saw a massive red tsunami wave coming to America. Suddenly, it crashed against the shores and covered the nation. I thought, ‘No. Does this mean a disaster will come?’ I heard the Lord say, ‘I will come to America with another wave of revival. This will be the third wave and will crash against the shores so intensely that the nation will awaken to righteousness again. I will cover this nation with my blood; cities will experience the salvation of my hand. I will empower my church to preach the message of the Cross and multitudes will run to altars on street corners and stadiums as I cover the nation with the blood of my Son from sea to shining sea.”

“The Lord spoke to me again, ‘As a sure sign of these things coming to pass there will be a wave of conservatives elected during the midterm election in November 2018; it will be breaking news. They will carry the House and the Senate, and I will uproot, replant and rebuild the nation. I will tie the three branches of government together, for a person standing alone can be attacked and defeated, but two can stand back-to-back and conquer. Three are even better, for a triple-braided cord is not easily broken. I will no longer allow your president to stand on his own. Even now I have called others to come along side and help bring the nation back from the dead, and they will take their seats in the coming days.

When people say that the Lord told them something when the Lord didn’t tell them anything, they are bringing shame on the Christian faith and they are discrediting men and women that really do hear from the Lord.

You just can’t make something up and say that it was from God.  The truth is that these false prophets are delusional, and this is a point that Lance Wallnau is making very strongly…

America ran purple after the midterm elections with the vote was split narrowly down the middle between Republicans and Democrats, and Spirit-filled entrepreneur and conservative commentator Lance Wallnau says he knows why.

There was no blue wave, and there was no red wave, which may have shocked some believers.

Over the past two years, Mark Taylor has been endlessly promoted by Christian and conservative media outlets, but I never endorsed him in any way, shape or form because I knew that he was as fake as a three dollar bill.

Now we have undeniable evidence that he is a false prophet, and he needs to publicly repent for what he has done.

The Last Days Warrior Summit is the premier online event of 2018 for Christians, Conservatives and Patriots.  It is a premium members-only international event that will empower and equip you with the knowledge and tools that you need as global events begin to escalate dramatically.  The speaker list includes Michael Snyder, Mike Adams, Dave Daubenmire, Ray Gano, Dr. Daniel Daves, Gary Kah, Justus Knight, Doug Krieger, Lyn Leahz, Laura Maxwell and many more. Full summit access will begin on October 25th, and if you would like to register for this unprecedented event you can do so right here.