Its Supernatural Design and Spiritual Significance

Many writers, from the earliest times, have called attention to the importance of the great subject of Number in Scripture. It has been dealt with, for the most part, in a fragmentary way. One has dealt with some particular number, such as “seven”; another has been content with a view of the primary numbers, and even when defining their significance, has given only one or two examples by way of illustration; another has confined himself to “symbolical numbers,” such as 10, 40, 666, etc.; another has taken up such symbolical numbers in their relation to chronology or to prophecy; another has collected examples, but has dealt little with their meaning.

There seemed, therefore, to be room, and indeed a call, for a work which would be more complete, embrace a larger area, and at the same time be free from the many fancies which all, more or less, indulge in when the mind is occupied too much with one subject. Anyone who values the importance of a particular principle will be tempted to see it where it does not exist, and if it be not there will force it in, in spite sometimes of the original text. Especially is this the case when chronology is dealt with, the greater uncertainty of dates lending itself more readily to the author’s fancy.

The greatest work on this subject, both chronological and numerical, is not free from these defects. But its value is nevertheless very great. It is by the late Dr. Milo Mahan, of New York. His work Palmoni*, which was republished among his collected works, has long been out of print. It greatly increased my interest in this subject, and led me to further study, besides furnishing a number of valuable illustrations.

* Not the anonymous Palmoni by an English author, published in London.

It is too much to hope that the present work should be free from these defects, which are inseparable from human infirmity. From one point of view it is a subject which must prove disappointing, at any rate to the author, for illustrations are continually being discovered; and yet, from another point of view, it would be blasphemy to suppose that such a work could be complete; for it would assume that the wonders of this mine could be exhausted, and that its treasures could be all explored!

I must, therefore, be content with the setting forth of general principles, and with giving a few examples from God’s Word which illustrate them, leaving others to extend the application of these principles and search out illustrations of them for themselves.

May the result of this contribution to a great subject be to stimulate the labours of Bible students; to strengthen believers in their most holy faith; and to convince doubters of the Divine perfection and inspiration of the Book of Books, to the praise and glory of God.

CHAPTER 1- THE WORKS OF GOD 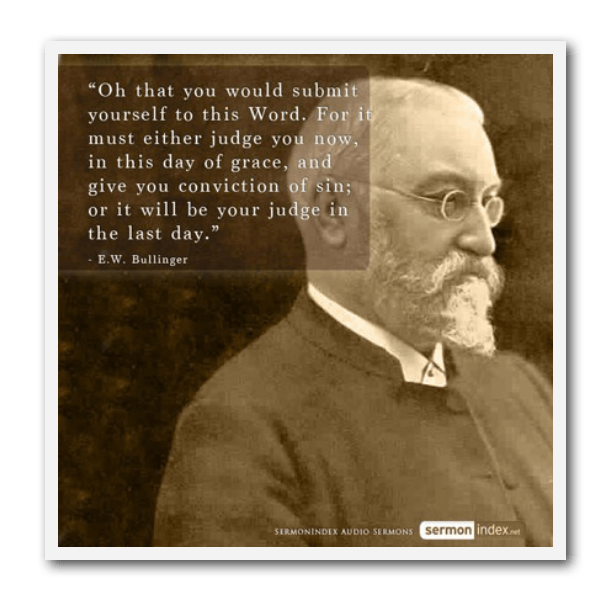 The Witness of the Stars E.W. Bullinger “With Foldout chart!”

Building upon ancient astronomical sources and current scientific data E. W. Bullinger displays how the constellations bear witness to the accuracy of biblical prophetic truths. Numerous celestial charts and diagrams are provided to lend vivid support to his conclusions. With the psalmist one discovers that “the heavens declare the glory of God and the firmament showeth His handiwork” thus encouraging Bible students to look upward for the coming of Christ.

“Dr. Bullinger takes Psalm 19 and using it as a base expands the understanding of astronomy to include confirmation of God’s Word. This book is of value to the advanced student of Christian evidences and for the average Christian it will give a greater appreciation for God’s handiwork in the heavens.” ___Gospel Advocate___

E. W. BULLINGER (1837-1913) was a direct descendant of Johann H. Bullinger the Swiss Reformer. Bullinger was a lifelong scholar and writer studying at King’s College London. In 1862 he was ordained in the Church of England.

Bob Wadsworth “This is one of the best works available on Biblical Astronomy. I have been a student of Biblical Astronomy for over 25 years. This is the book that first got me interested in the field. It is very concise in its Biblical interpretations of the constellations and star names. The book is also very informative as to where the constellation pictures came from. The Witness of the Stars is a masterpiece that brings ancient light to a new generation. I am now a full time Biblical Astronomer and have myself written a book on the subject which concerns recent celestial events. I would not have had a clue of where to begin if it were not for this work by E.W. Bullinger”
By jlagardejr “I have read this book since I was 11 years old. Not only did it teach me the constellations, it gave me the insights that everyone must know so that they will not lose faith in God. That the Bible is true because most of the stars ancient names can be found and were used in the Bible to convey messages in one word. Every now and then when there are special events in the sky I try to decipher what it mean and what God is trying to tell. It’s the second book I have always loved after the Bible in my 25 years of living”