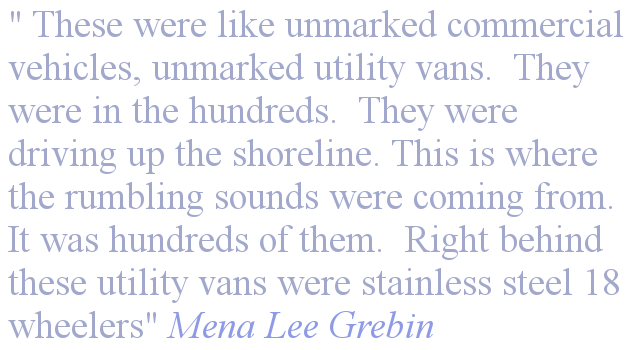 Mena Lee Grebin shares a dream she had at the end of May, beginning of June regarding martial law.  She posted the dream in this video “Prophetic Update: Martial Law Coming To America“

I want to share a two part dream that I had almost three weeks ago now regarding martial law.  I wanted to share with you, because some other people were involved in this as well.  The first dream that I had almost three weeks ago, was that I was in the city of Chicago, that was where I was born and raised, and I have left there.  I haven’t lived in Chicago for over 22 years now.  I still have family there, my father, along with other relatives and siblings. In this dream, I was visiting, it was warm out still.  I was in a fourth or fifth story apartment that was overlooking the lakefront, the skyline of Chicago.  Chicago has a very beautiful skyline, it is one of the most beautiful skylines in the country next to New York and other cities that are out there.

I was trying to take a picture of the skyline on my cell phone to post it on facebook of all places.  Because the apartment or place I was staying was on the lakefront, I couldn’t get the entire skyline, to my phone because I was too close.  What I ended up doing was turn my camera on to scan the skyline to left to right, and I was doing this with my phone.  To my left I saw sailboats that were docked along the shore line. …………  I saw a man who was tying down his sail to his boat, and there was this kid who was no more than 14 years old, he was on a jet ski.  Very detailed, very specific.

Next thing I know I hear this rumbling sound.  This vibrating sound that was making the windows vibrate.  It was starting to shake the building almost. The first thought that came to mind was it was an earthquake that was happening.  I looked out the window and could see that the rumbling was causing the waves to kick up on shore, and this kid that was on the jet ski was being tossed to and fro.  My initial thought was to open up the window and yell out to the man who fixing the sail, to watch this kid, because I didn’t want him to fall into water.

With all of that being said I saw the boats crashing into one another, and the kid never fell off, the next thing I know I looked up the shoreline, I see these massive rows of cars coming.  They looked like unmarked utility vehicles, like the white vans you all see, like painters or like commercial carpet cleaning, duct cleaning….they have those vehicles that they drive.  These were like unmarked commercial vehicles, unmarked utility vans.  They were in the hundreds.  They were driving up the shoreline. This is where the rumbling sounds were coming from.  It was hundreds of them.  Right behind these utility vans were stainless steel 18 wheelers.  Hundreds and hundreds of them.  It was really weird because they were driving up the shoreline and in some instances some of the vehicles were almost in the water driving.  They stopped where the boats were.  When the vehicles stopped, these people jumped out.

The people who jumped out where military forces.  The setting was right at evening time, right at dusk.  Right before it is completely dark.  Right when the sun dips below the horizon, and there is that stream of light left.  That is how it looked outside.  Not totally dark, but almost there.

These soldiers jump out of these trucks, these marked vehicles and they have on what is known as the military camouflage.  The military camouflage is the brown, beige, and the tan colored one.  They jump out and have these automatic assault riffles, night vision goggles, flash lights mounted on their gear.  They just jump out of their vehicles, and the first thing they go to, is these two people on the shoreline.  They just ran over to this man and kid and arrested them.  They seized them, they didn’t say anything to these, they just seized these people. When I saw that, I just knew automatically that what was happening.  I ducked my head below the window, because they started shining their flashlights into people’s windows.  I ducked below the window, because these two big huge picture windows that I was looking out of.  I called to my son, I was like ….’Josiah, Josiah, …..turn off the lights’, I was telling him to turn the lights out.  I was like oh, my goodness…this is really happening.  I kept saying it over and over… this is really happening.  I told my son to crawl down the hallway, to get my mother who happened to be with us in this dream.  She was in the bedroom in this place…wher ever we were staying.  I didn’t recognize the place we were staying.  In reality I didn’t recognize it.  I was getting my cell phone, trying to call my husband, to tell him what was happening.  I wasn’t sure if I was going to make it home.  The dream was so real.

She woke up, and when she went back to bed, she had another dream that was like a continuation of the previous dream.  She looks at a tv screen, and it was stated that Martial law was declared.  She sees hummers, military trucks and tanks going through the streets of the cities.  Listen the rest of the dream here

Will The Pre Trib Rapture Cause Many Christians To Take The MARK For Not Preparing? Will Martial Law Take Place In America? ...