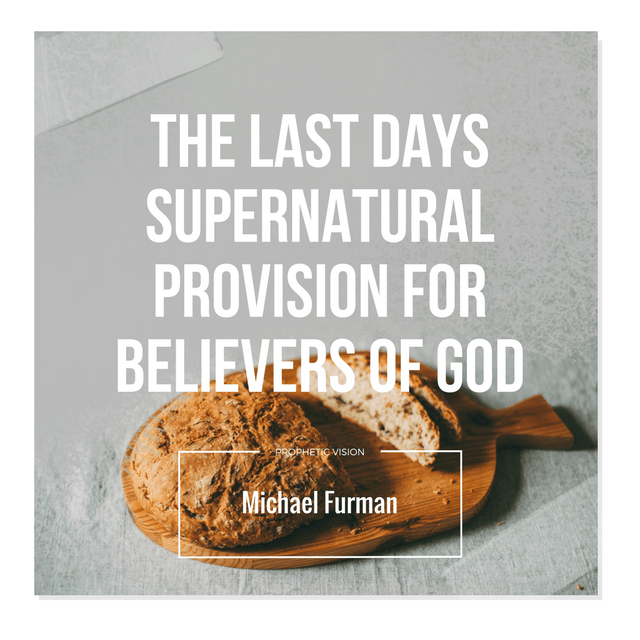 This prophecy appeared on my friend Jonathan Theiben’s facebook page

(I couldn’t find any information on Michael Furman)

One night in the winter of 1981, I had a vivid prophetic dream of what it will be like in the last of the “last days”. I believe it is prudent to take heed.

It was more like a vision, sort of an “out of body experience”. I was in the spirit, moving from place to place, unobserved (most of the time). The setting was a time of catastrophe here in the United States, a total “grid down” situation. No one had electricity, natural gas, or any other means of heating or illuminating their homes–and it was a very cold winter.

I went from house to house only to observe. I sensed immediately that I was visualizing an event in the future in this country.

The first home I visited was dark and cold; there was a bone chilling feeling there of complete and utter despair. I saw the family of the house huddled in a corner of the dining room with seemingly every piece of clothing, including coats, on themselves and still they were shivering.

The most revealing of their plight was the expressions on their faces, one of utter hopelessness. There wasn’t any food in the house, and it looked like they hadn’t eaten in days. Their facial features were sunken-in and almost colorless. They did not know Jesus as their Lord and Savior.

The second home I visited was the exact same situation, and so was the third, and fourth, and so on down the block, total and complete despair, house after house, even entire neighborhoods.

Then suddenly I came to a house that was dimly lit, as with a single candle. As I entered, I felt an overwhelming peace; a real presence of the Lord there, saturating every cubic foot of space in the entire house. I knew this place to be home of a Christian family. There was an air of intense joy and peace. Everyone in the home was bubbling with exuberance, even though there was no food to offer the children or themselves, and no heat in the house, the parents gave thanks to God anyway.

It was very difficult to see anything, however, the mother preceded to place a fine table cloth on the table and set it with plates, bowls, silverware, and glasses. The rest of the family gathered at the table, seating themselves as always–even though there was no food. The father of the home gave thanks for the meal as everybody bowed their heads in reverence. Then suddenly, light appeared in the room–one could not tell where the light was coming from. The entire family opened their eyes, and to their delight (but not to their surprise), piping hot food of quite an assortment was there on their plates and in their bowls. They all gave thanks to God all the more.

As they did the room became radiant with heat; and for that matter the entire house. The light illuminating the room was also becoming brighter and brighter. The more they praised God, the warmer and brighter it became.

God miraculously blessed the people of this Christian home that exercised great faith in God’s ability, so they would not be cold and hungry. I saw other homes like this one, but they were few in number.

One thing that was so blatantly obvious was the vast distinction between the God fearing Christian people and the unbelievers. There were no gray areas; no lukewarmness.

The Bible believing Christians greatly exemplified their faith by their daily lives, and the ungodly were living in total hopelessness and despair.

The last house I entered was a home of indescribable despicable evil. A cold sinking and sickening feeling enveloped me as I entered. This place was the coldest and darkest of them all, and for good reason. This was a dwelling of demons.

There was a single individual sitting in a darkened room, seemingly a middle aged woman. I was in an adjacent room, but I immediately felt a very wicked presence emanating from the other room even before I turned to look inside.

This person was different from all the others in many respects. First, she was looking right at me the whole time and was totally aware of my presence as soon as I entered the house.

Second, the expression on her face was one of utter hate, anger, and resentment. She wanted nothing but my death. In fact, she made many attempts at causing me great harm; each time failing miserably and becoming more frustrated. She never got up from her chair. Instead, she used demonic powers to manipulate objects in various rooms–blunt objects and mechanical devices.

Recognizing the power I had in me (the Holy Spirit) was far greater, she eventually gave up. At that point I left the house.

At the very end, I found myself in an undisclosed and unrecognizable location, but the location was inconsequential and totally irrelevant. The important things were the characteristics of this place. I saw round smooth stones lying neatly on the ground evenly spaced. What appeared to be very sharp, jagged stones were suspended in midair above the smooth stones. All of a sudden, what seemed to be concrete poured from above, filling in all the gaps of the smooth stones until they were all cemented together. None of the jagged stones were even touched by the concrete or bothered in any way. The cemented smooth stones formed a solid floor–completely immovable.

At this point I woke up, finding myself sweating and winded, as though I actually experienced this whole ordeal.

As I sat up in bed, I contemplated the meaning of the smooth and jagged stones. Also, “what exactly did the cement symbolize”, I thought to myself. It could not have been two seconds before I had the interpretation.

The smooth stones represented the unbelieving world that rejected Christ;

The jagged stones represented the true believers and followers of Jesus.

The cement represented God’s divine judgment that will be poured out on the whole earth in the future.

Just as the cement that filled in the gaps making a solid floor, the ungodly will not be able to escape God’s judgment.

They reach the point of no return where they can no longer be saved. They are condemned for eternity.

However, the righteous, godly people will not be harmed in any way by God’s wrath.

8 But since we belong to the day, let us be self-controlled, putting on faith and love as a breastplate, and the hope of salvation as a helmet.
9 For God did not appoint us to suffer wrath but to receive salvation through our Lord Jesus Christ.
10 He died for us so that, whether we are awake or asleep, we may live together with him”. (1 Thessalonians 5:8-10)

The main thrust of what God was showing me through this dream was God’s love, mercy, and provision for the believer, and the utter hopelessness of those who have rejected Christ and have delighted in wickedness.

Another point He was making in this “last days” scenario was the vast “distinction between the righteous and the wicked, between those who serve God and those who do not”.

17 “On the day when I act,” says the Lord Almighty, “they will be my treasured possession. I will spare them, just as a father has compassion and spares his son who serves him.
18 And you will again see the distinction between the righteous and the wicked, between those who serve God and those who do not”. (Malachi 3:17-18)