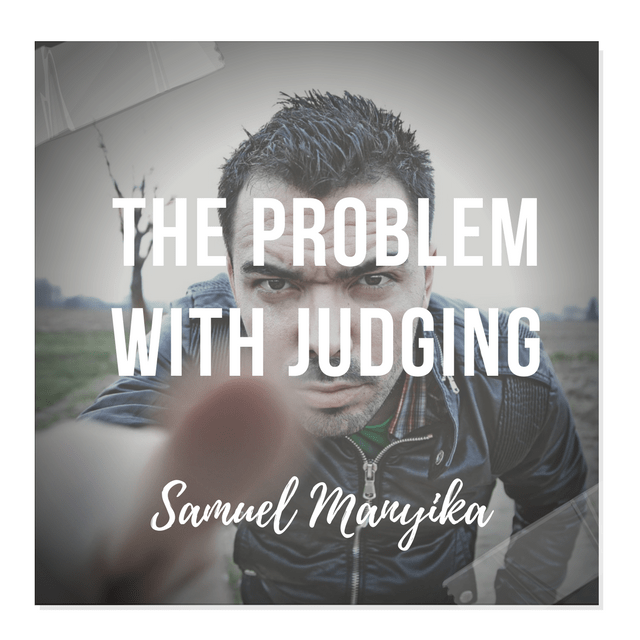 The problem with a judgmental attitude is that it denies one opportunity to make an honest appraisal of the kind of person they really are.
It also tends to make people blind to the dynamics, pressures or realities which may have caused or influenced certain actions.

When scandals hit some big evangelistic ministries in the USA, I remember asking an elderly minister friend of mine John Hutshingson what he thought about it all. I will never forget his reply, he said “Sam, I have never had more than five to ten thousand dollars in my account, some of these fellows manage and have access to millions, I am not sure whether I behave well because I do not have money to do crazy things or because I am really a principled person!”

It is easy to criticize people who find themselves in certain situations and in the process lie to ourselves that we are better morally, but sometimes it is simply because we have never been given the opportunity to do what they did.

There are people sitting in church who are not drinking because they cannot afford it, they do not have a small house or second wife because it is beyond their means.

So in looking and dealing with others and the things that happen around in our church, family or political leadership etc we must be careful, while we are busy judging others we may fail to acknowledge that we are actually some Idi Amin who was just denied authority and a butcher’s knife.

Leadership is about making decisions both popular and unpopular decisions. Some get immediate accolades, some are appreciated after you are dead, some are never appreciated at all.

The bible says it is ONLY to GOD that a man stands or falls.

Romans 14:4-5  Who are you to judge the servant of another? To his own master he stands or falls; and stand he will, for the Lord is able to make him stand.

So while we are busy Judging and giving sins and iniquities sizes like shoes,
ie “ I committed a size 2 sin but that one is a six 45 or oversize!”

Remember with God sin is missing the mark regardless of by how many centimeters.

In as much as we should encourage accountability and responsibility in others and practice it ourselves, we should be careful that we do not end up playing God because that is an impossible position to fill.

The worst part of a judgmental attitude is that it puts weights of guilt on those who have been set free, hindering any movement forward.