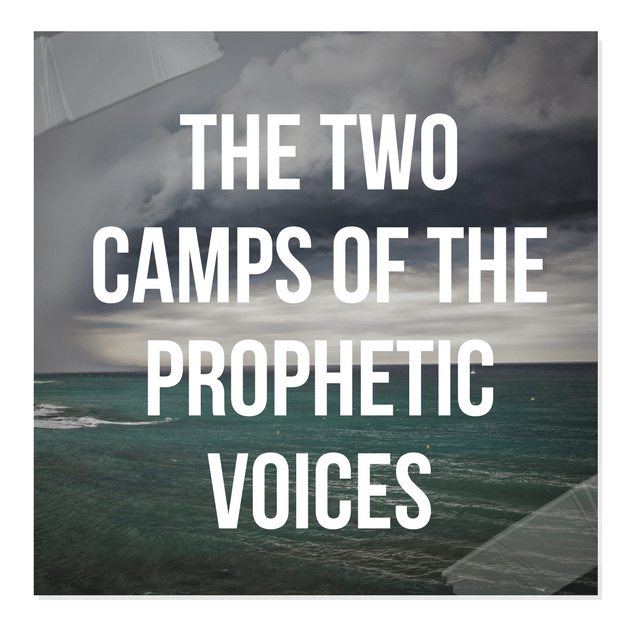 If you have access to the internet in today’s world and attempt to follow the contemporary prophetic movement, odds are that you find yourself continually being bombarded with prophetic perspective from a variety of sources.

Personally, I regularly receive and subscribe to email updates from a large contingent of prophetic voices in America, watch their videos and latest thoughts when I have time, and do my best to check traveling itineraries to see if they might be in my area so I can attend one of their meetings. As I have been tuning in to many prophetic voices lately, I have begun to realize that there are two main groups of messengers in the contemporary prophetic movement that I see rising. I had a prophetic dream recently that finally gave me language to what I have been witnessing. In the words of the Holy Spirit in the dream, “Jeremiah, there is reactionary prophecy and then there is revelatory prophecy.” Let me expound.

Reactionary prophecy is birthed from a prophet’s soul and is often times the flesh’s reaction to a word that has been released by another. Rather than receiving pure revelation from God, prophets who operate in reactionary prophecy are dependent upon other prophets and leaders receiving a word from God and then agreeing or disagreeing publicly with what has been spoken. (Jeremiah 23:30 “Therefore behold, I am against the prophets,” declares the Lord, “who steal My words from each other.”)

Individuals who move in reactionary prophecy are constantly attempting to establish truth by criticizing others who they perceive are making mistakes or who they think are in error. Or it builds on what others have said and adds to it as their emotions are stirred.

Leaders who move in reactionary prophecy love to use their platforms to indirectly put others down. Periscope, Facebook, and other social media tools are used as instruments to react to what someone else has said or done. Meanwhile the person whom has caused the potential offense is never directly contacted or asked for an explanation. Rather than scan heaven in order to release fresh revelation, prophets who operate in reactionary prophecy scan the internet looking for prophecies and messages that they can tear down and appear to offer insight on. Reactionary prophecy is fueled by the political spirit. It believes its job is to clean someone else’s mess up when it can’t see its own or build on what another has said in a kind of one-up-manship.

If a prophet or leader is developing a track record where all they do is attempt to develop insight and release reactionary prophecy based off of what someone else has said or done, it is an immediate indicator that they are not fellowshipping with the spirit of God, but the spirit of offense or personal ambition.

I want to encourage those who follow the contemporary prophetic movement to align with voices who are operating in revelatory prophecy and not waste your time listening to individuals who are releasing reactionary prophecy fueled by the spirit of offense or ambition. The longer you submit your spirit to their ministry, the more likely you are to develop a reactionary approach to what others are saying.