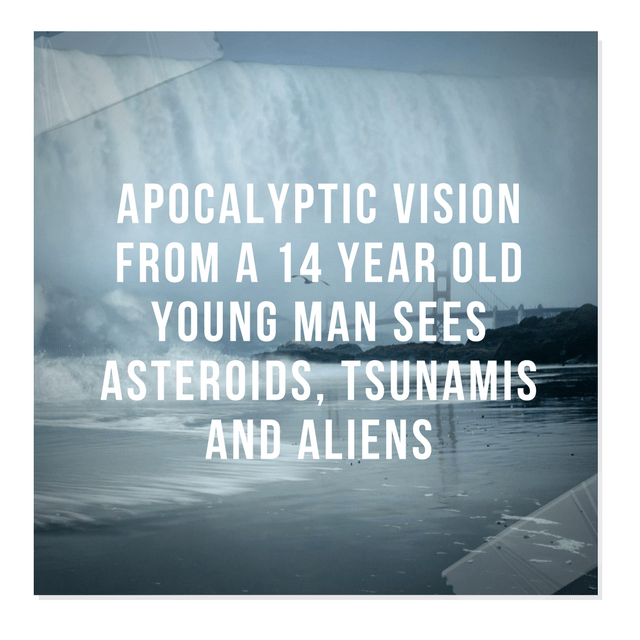 While me and my 3 kids were starting to pray in tongues during our night time prayer, my son saw a pair of huge feet with big holes –it was the Lord JESUS. As we continue praying in the Spirit, my son had an out of body experience. Someone with a white robe held him up and his spirit was brought in space. He was brought in front of our house and he saw us including him kneeling down and praying. He was then brought to space and he saw the earth and every continent.

Then, he saw something like a huge asteroid (he wasn’t sure if it was an asteroid or a saucer plane or a planet with a ball shape and thorn-like around it) and it was huge and its destination is to hit the earth. Then fireballs as well hit every part of the earth. It was scary according to him. It was shown to him like it will hit at any moment. He also said that so many fireballs will hit the US compared to other continents/countries.

Then he heard a thunderous-like voice from above which says “Russia!”. And it was shown to him that huge waves tsunami started to enveloped Russia. Also, he was brought to a stadium where he saw famous NBA players who had a game that time and with so many audiences and so many people watching and cheering. Suddenly, he heard again a thunderous voice saying “USA!” and huge waves tsunami enveloped everything. He saw himself in the water too and he was so scared that he thought he’ll die.

Suddenly, he saw himself on a cloud while looking at the earth from a distance. As he was facing the earth, he heard a mighty and thunderous voice which says “Persia!”. Then he heard “Egypt!” and was shown that aliens/demons visibly landed on Egypt. He saw that the earth was surrounded by the angels of GOD. He was so scared and shocked of these things shown to him, when on a blink of an eye he saw himself standing at the gate of heaven and saw JESUS standing with arms wide open and welcomed him. This was his first heaven experience.

“I heard the word “Lincoln”, I saw and felt it sinking ” – Trouble at the Strait of Homuz – Prophetic Word Caroline Diadem