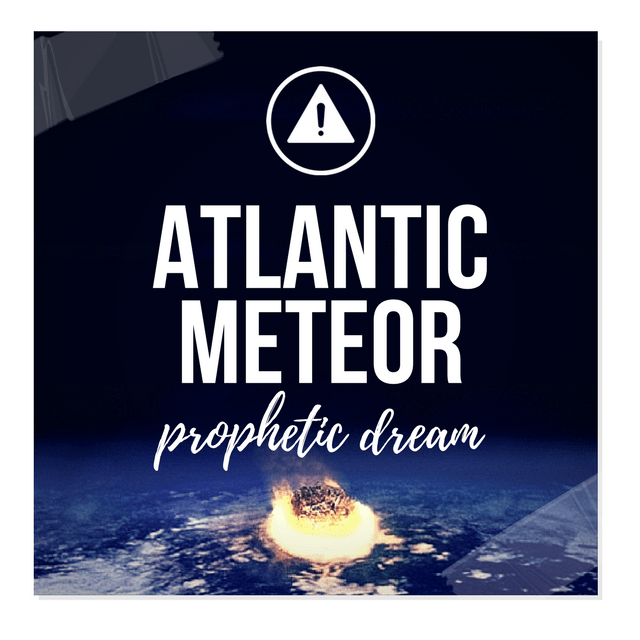 On the night of Feb. 12 I woke up about 3 AM. Just before I awoke I had a quick dream of a headline; that read something like “Meteor Hits Atlantic” or “Atlantic Meteor” and at the time I knew the date but then when I awoke in the morning, I was not sure. The two dates that come to mind are 2/26 or 4/16, but again I am not sure they are viable, for I only saw it for a second. I also saw something like 4.— magnitude and remember asking myself how a magnitude could be related to a meteor strike.

I am 100% sure I saw the headline, but not at all sure about the date(s) but I do find it interesting to note that on 2/26/13 the meteor exploded over Russia. Also about 2 years ago in February 2012, I had another more vivid dream about the destruction of an island paradise that may be related to this more recent dream.

In the early morning hours—about 4 AM on 3/5/14—I had a dream of a tsunami. The dream started with me watching the ocean—I was looking for a tsunami to occur. Then I saw it far away coming toward the shore. I started yelling to everyone that a tsunami was coming and I started running up the stairs of a building or hotel to get up to “higher ground.”

From the vantage point of the upper floors I saw the tsunami come rolling in and at that point I was glad that I was able to warn people, who had heeded my warnings, and also that we were saved from the tsunami.

I believe this is the third dream that I have had regarding an Atlantic Ocean destruction. The first involved a tropical island being destroyed (Dreams of a Paradise Lost), the second involved seeing the headlines of an Atlantic meteor impact (Atlantic Meteor Impact Dream), and now this is the third one. I believe it is highly possible, almost probable, that these three dreams are all foretelling the same event—an Atlantic tsunami brought about by a meteor strike.

If that is the case, the only thing I can say to the timing is that in the first dream the destruction occurred after a man from Oklahoma City was frantic and panicked. So this may indicate this event will follow a disastrous event in OKC. The only other clue to timing is the holiday parade, which occurred after the tsunami.

After looking up Route 72, I sat down for my daily prayer and Bible time and I randomly opened my Bible to Ez 31. This passage stood out to me. “Thus says the Lord God, “On the day when it went down to Sheol I caused lamentations; I closed the deep over it…” Ez 31:15. The passage in Ezekiel is talking about destruction brought to Egypt after the fall of Jerusalem—that may be another hint as to the timing of this event.