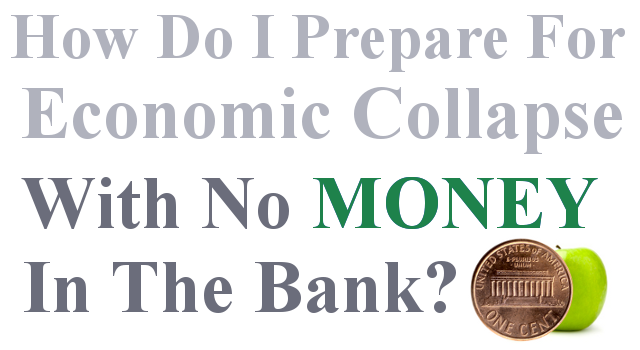 For most of us who know a collapse is coming, one of the first things that many of us ponder is “do I have enough money?“, “how much should I stock up?“, “how long will these terrors last for?“, ” how do I prepare with little money?“, “how will I feed my family?“………….

How do we prepare for an event, when we don’t know how severe it is going to be, or how long it will last for?

In an interview with Mena Lee Grebin (Trunews 5/5/15), Rick Wiles was in his backyard, praying to the Lord, when he asked God this very thing.  I think you will find the answer to his prayer a comforting one, filled with hope….

Mena:  “That is why there are people who are investing in gold and silver. There are people who have done that.  I have told, they have asked about that, and told them that is where you have to listen to the Lord to tell you what to do because I absolutely believe that every place is going to be impacted differently.  Everyone is not like the earthquake that hits California…well we are not going to feel that on the east coast in that sense.  People are being told different things.  Some people are being told to store up on water mostly than anything.  Others are being told, like one sister who lives 20 miles outside of the San Andreas fault line, …. a close friend of mine was told to leave.  The Lord told her to get out.  The Lord told her that the last summer would be her last summer period.   She packed up her husband and her kids to leave”

Rick: “I know other Christians who were given sudden instructions living in California to get up and leave now”

Rick: “You know something, the Lord shared with me several years ago.  I know what year it was, it was ….either late 2010, or early 2011.  I was walking outside around in a field and was praying and asking Him………  Father, what do I say on the radio to the people who write to us, and call us and email and say…….I don’t have a lot of money.  I just don’t have it.  I hear you Rick, and I believe it…..I don’t have a lot of money to buy stuff and prepare….   I said Lord ….what do I say to them?  This is what he told me Mena…  He said tell them to take what money they have and buy the most that they can buy.  He said if they have nothing to give away to share with others, I have nothing to bless.  But if they have something, that they can share with others, I can bless it and multiply it.  See it isn’t the amount that you have stored that is important, it is the amount that you are going to give away, that you are going to share with others. If you have a mindset that this is all about me, and mine and ours, …..you are not going to make it through.  Your going to go through that provision so fast, or it’s going to be stolen from you or what ever.  The Lord is going to have you give it away.  You are going to be sharing it with others, and he is going to be multiplying it.  There is going to be book of Acts, supernatural multiplication of physical goods that is going to be happening.  But if you don’t have anything to give away, he has nothing to bless.  So don’t worry about how much money, or lack of money you have, and you cannot buy anything to prepare…..just get something.  Even if you can fill your closet up with cans of peas…you have peas to give away.  I mean, do something.  The Lord is going to bless….you know I think the other reason Mena, the Lord is telling some people to store this,..and you store that…..is because He is going to bring us together as the body.  This whole thing about being divided and a loner, you know…we have this Americanized individualism …  I will take care of myself ………No, guess what The Lord is going to force us to be the body of Christ.  He is telling you to stock up of one particular item, because others are going to need it.  Others who didn’t stock up on that thing”

Listen to Mena’s interview with Rick Wiles about her visions of America’s future over the years.  She talks about how this (2014) September, October, November, and December she was told there would be a crisis that hits America.  She tells of her mothers vision of an earthquake hitting California, amongst so many other dreams and visions of the crisis that is going to hit America this year and the coming years.