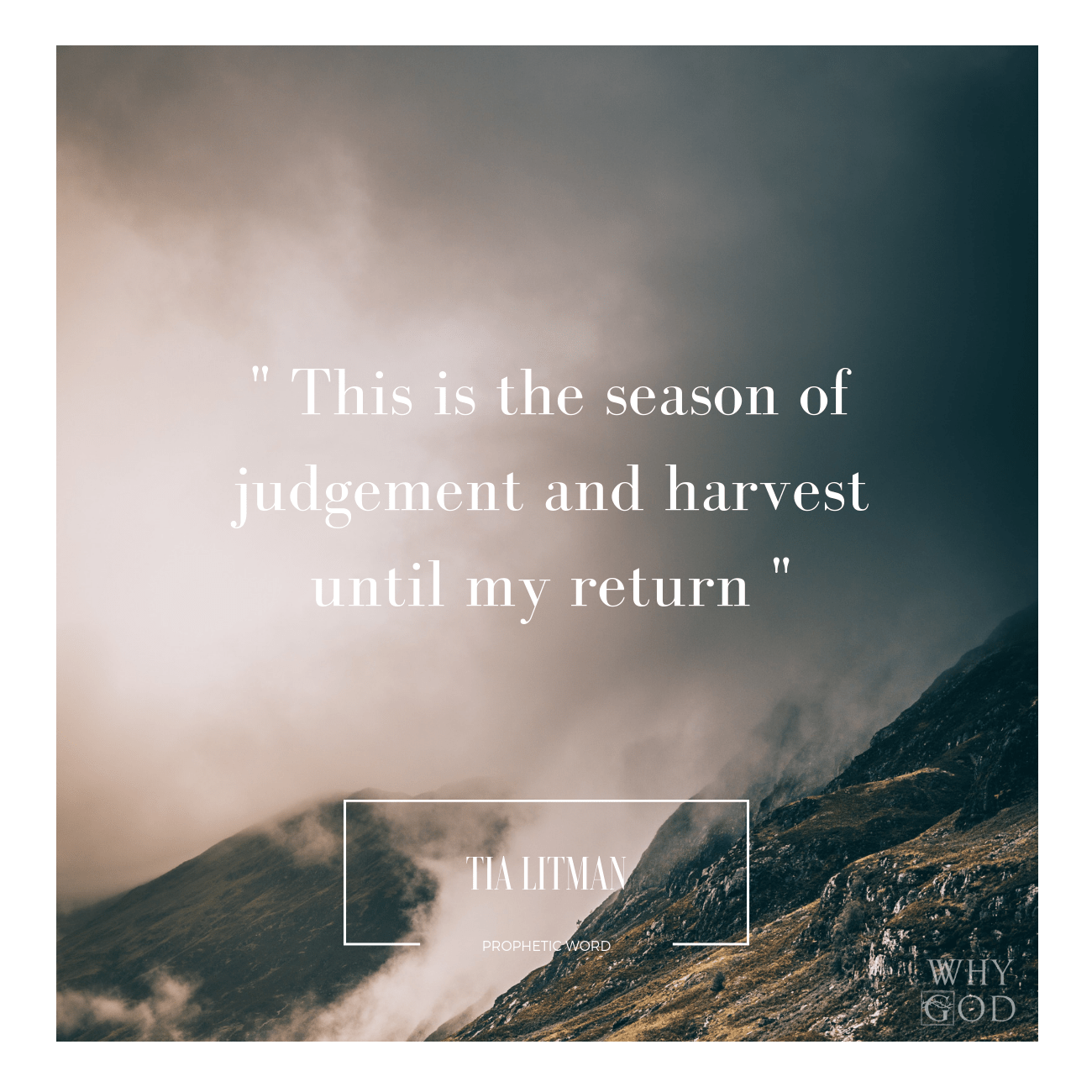 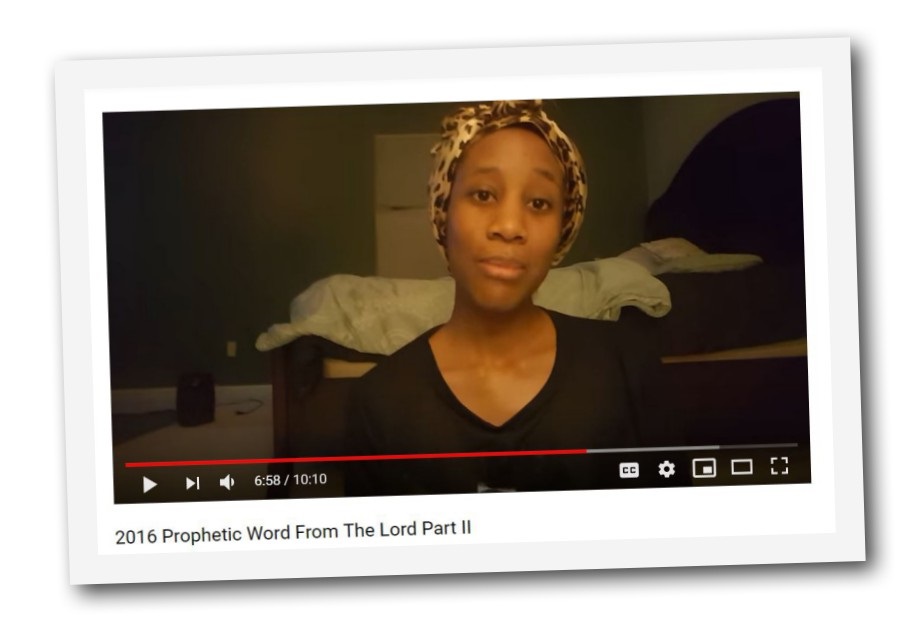 This prophetic word is a must read!

Tia Litman and her husband decided to stay home on New Years to pray. Just a minute to New Years, she was telling the Lord the time in her prayer, and the Lord intervened and told her the lateness of the hour on HIS clock.  He mentioned it was just seconds to midnight.

A couple things stood out to me in this prophetic word:

One being that we are entering into a new era of judgement coupled with persecution and tremendous outpouring.  In the prophecy we are to study the book of Acts, as we will be facing a mirroring to some degree.

Second, was a rebuke to the pastor teaching lawlessness.  Many pastors today tell people to ignore God’s laws and His commandments,- that they have been done away with. Another rebuke was given to the luke warm believer entertaining sin.  Before judgement is poured out on the unbeliever, judgement is coming for the church first.

Third, an instruction to fast and pray was given.  If we are wanting instructions going forth, we need to press in more than ever. Going far beyond what we have done so far.  Everything should be questioned – Is this Thus says the Lord for me?

This prophetic word wasn’t just for 2016, but like it was mentioned, we are entering into a new era where the days ahead are going to look different than the past.

Transcript From The Video-

It is going to be a hard thing that I am getting ready to read, but it is truth and it is along the lines of what He’s been telling his people over the course of the years so far.

I  have pushed back and pushed back to spare to save to show grace.  I am still showing grace but no more pushing time back.

2016 is the year of trepidation. Things will take a time for the worse, thus saith the Lord. This is not just for the United States. People think that I’m only displeased with America. No, I am angry at the entire world. Sin abounds everywhere.

The days of old, the days of Noah have finally arrived and the door that was ajar on the Ark is in motion to closing.

(Tia’s comments – That’s in reference to what He asked me a while ago.  He showed me a vision……  (this is a few years back) , …..  of an arc and the door.  I guess you could imagine like when Noah had built the ark, the door, …. he had to go ahead and close it up.  Once that door was closed that meant that nobody was able to get in.  One time in my prayer time, the Lord showed me your vision of the ark and the door was kind of closing.  It was kind of ajar, (slightly open).  The Lord was telling me that the door was ajar and that people still have time to get in before the door closes all the way.  Now He is saying…  (this was a couple years ago) that the door is now in motion to closing.  )

The world will be judged financially, economically, food wise and drought, and in famine, and in food, and in typhoon, and then tornado and in hurricane and in wildfire, and earthquakes, in job loss and homelessness and an illness and in disease and in an incurable disease, and and loss of the womb and childbearing and cursing the earth and all the rain who do not know my name sayith the Lord.

Death will come knocking at the heathen’s door. Those who do not call upon the name of the Lord in His hour. I am the Lord of the hour.

It is 11:59 with 30 seconds left until 12 midnight.  A new era, a new dawning of mankind.  An era which the earth has never seen before and never will see again.

Repent, Repent, for the kingdom of God is at hand. Playground time is over.

(Tia’s comments- For all these people has been playing around, having fun, not worrying about the things of God is over.   )

As always says the Lord, I will start with my house.

With my finger pointing at you pastors who have learned my flock astray. My flock that I have given you charge over, you have led them in rebellion.  You have hardened your hearts against me to heap upon yourselves riches, with the spirit of pride within you. You’ve turned My house into a house into harlotry.  You are accused!  You’ve allowed lust, sexual immorality, adultery, drunkenness, haughtiness, homosexuality, and a Hollywood spirit to enter into my house. Woe, woe unto you leaders, you pastors.  Some of you prominent pastors, I’ve convicted to time and time again, but you did not listen.  Woe unto you, for the charges that have against you are many.

WOE to you fence straddlers, you luke warm saints, WOE unto you complacent Christians, WOE unto you lairs and back biters, and gossipers.  WOE to the church that is not truly apart of my bride.

You have been sifted and rooted out.  You are a tare, not belong with the weak.  You are judged says the Lord.  This year, 2016 is an unadulterated year of trepidation and change.

(Tia’s comments – Basically He’s saying this year is going to be the precipice of the forthcoming of the things to come from this year and this time forth. )

To my saints, you will see that an outpouring of My spirit this year, all that you have dreampt concerning these things.

Be patient, your redemption draws nigh.  I am closer than you think. But before the appointed time, there is an appointed time of persecution, laws being changed in various places, and particularly Australia and America, as well as all over Europe.  They will not favor those who love me.  These laws will cause imprisonment and forms of torture and even death.

If you love your life, you will lose it, but if you lose your life you will gain it.

(Tia’s mentions at this point that the Holy Spirit was poured out once Jesus ascended back to heaven.  His disciples preached the gospel and miracles and signs and wonders followed them.  At the same time, there was imprisonment, and some were beheaded. The time of an outpouring of God’s Spirit in the book of Acts was also a time of persecution )

Greater works shall you do in my name, arm up, gird yourselves, be ready, the time is now.  There’s a new harvest of souls coming in that you must minister to before my return.

Lo, I am with you, even until the end of the age. This is a time of fasting and prayer. Go far beyond what you normally do so that you can receive explicit instruction from me and me alone.

Even if you’re our pastors telling you to do something, your response should be …..  Is that – Thus says the Lord?

Every single move you make should be is it – Thus says the Lord?

We have entered into a critical time now.

Everyone who is a part of the body will have a different role to fulfill.

I love you, It is time

says the Lord of hosts.

This is the season of judgement and harvest until my return says the Lord of Hosts.