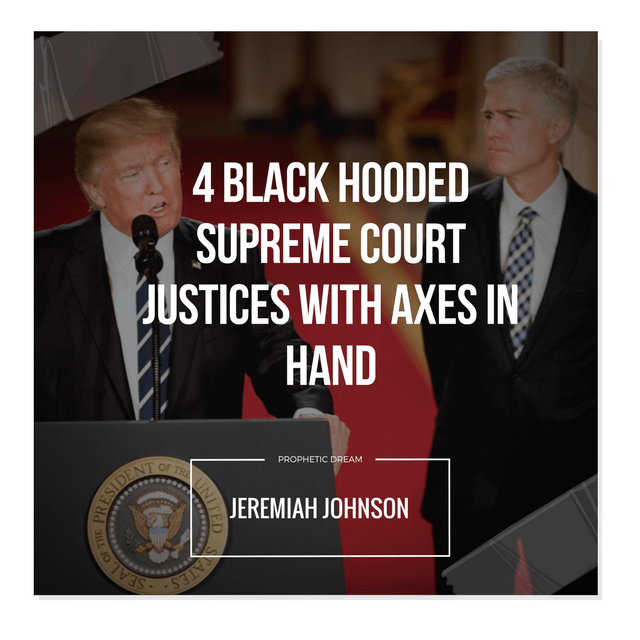 I want to be clear that the motivation and heart behind sharing this prophetic warning dreaming concerning Judge Neil Gorsuch publicly is to mobilize intercessors, prophetic people, and leaders to keep a close watch on this man and lift up prayers on his behalf. As I have continued to pray and fast concerning Judge Gorsuch, I believe prophetically that there is justifiable concern regarding his nomination and future.

On February 9, 2017 I had a very troubling prophetic dream where I saw 4 black hooded Supreme Court Justices with axes in hand as they sat on white horses. (I discerned in the dream that they were liberals). There was a deceiving spirit that came upon them and attempted to make a covenant with Judge Gorsuch. As the 4 and Gorsuch spoke, I heard God say, “the days ahead will be treacherous”.

The liberals are doing all they can to subvert the law in favor of their leftist philosophy. (Part of the lawlessness that has engulfed our nation is that judges no longer apply the law or make decisions based on the law. They legislate from the bench based on their political philosophy and personal feelings.) Gorsuch could represent the rule of law in the judicial system and the four black hooded justices represent assault on real law. Did Donald Trump choose wisely in nominating Judge Gorsuch, but will there be a clear attempt by the liberal Supreme Court justices to persuade him away from his convictions in the years to come?

The prophetic narrative on this man in the days ahead will be very interesting to say the least.

Donald Trump has unveiled Neil Gorsuch as his nominee for the US Supreme Court. 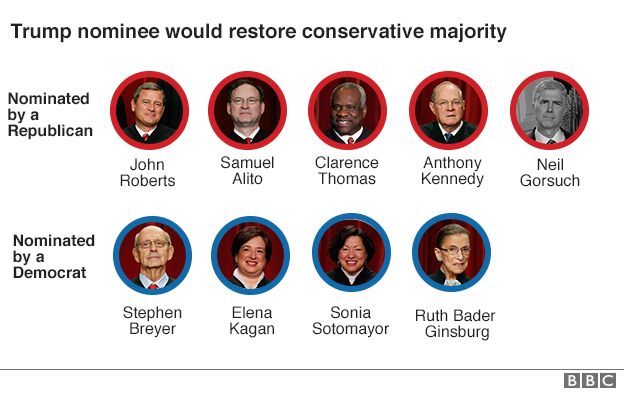 Given the immense impact the US Supreme Court has on US political life, the nominee will face tough questions from the Senate during any confirmation hearings. So how might this pick change the nation’s high court?  Read more at BBC.com