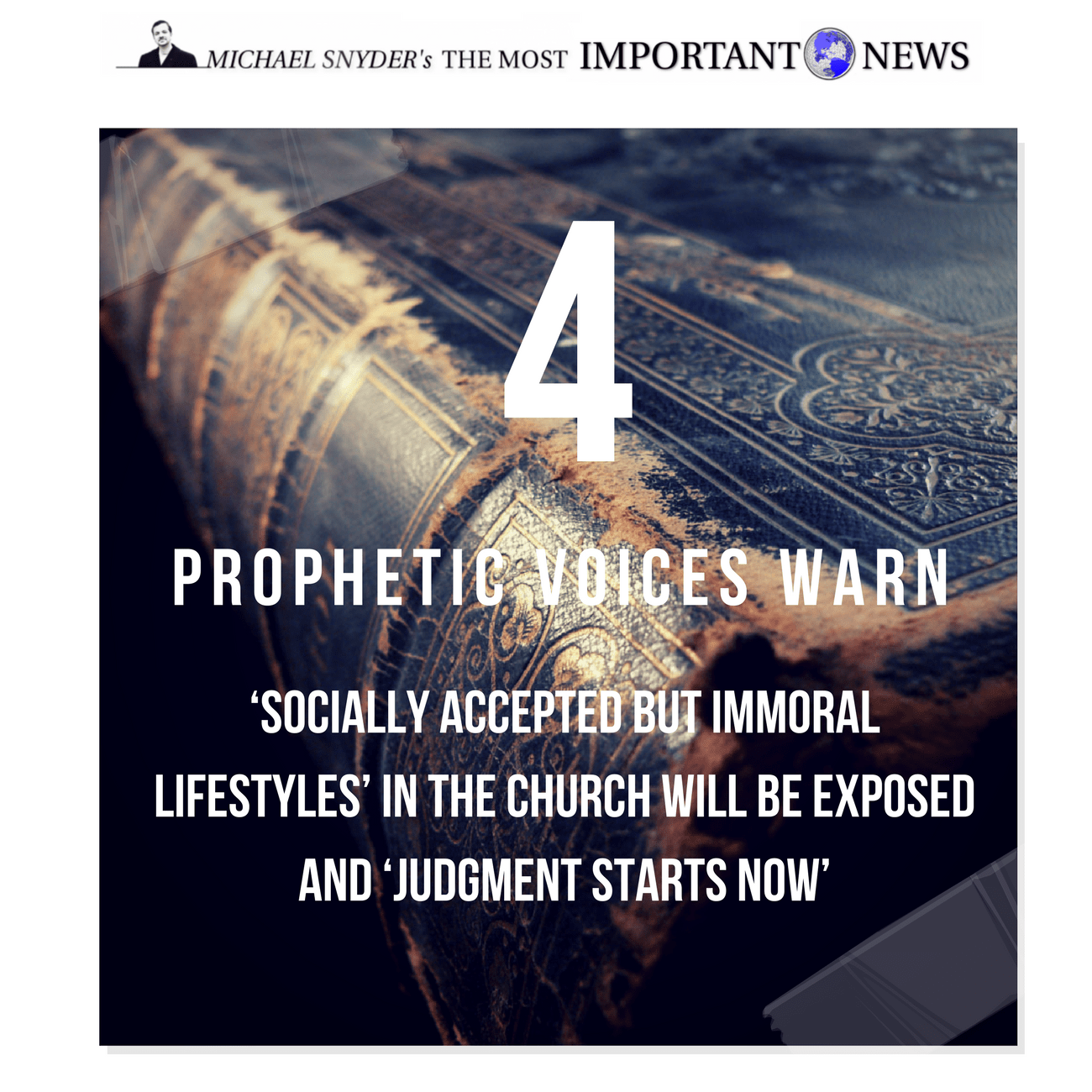 Judgment begins in the House of God, and those that are playing around with sin need to stop before it is too late. In recent weeks, I have been writing much about the prophetic voices that have been warning about the “exposure” and the “great shaking” that are coming to the Church. If you choose to put yourself out there as a minister of the gospel of Jesus Christ, you can’t embrace great sin and expect that there won’t be any consequences. Our God is a holy and awesome God, and the only way that any of us are going to make it through what is coming is to live in holiness. The Scriptures tell us that the fear of God is the beginning of wisdom, and there isn’t a lot of the fear of God in our churches today, but there will be soon.

After serving almost 30 years as an active duty army Chaplain, James retired at the rank of Colonel. Before and after his military service, he was a pastor and church planter for more than thirteen years. In 2010, James and his wife, Gloria, moved to Columbia, South Carolina in order to write books, teach seminars, and mentor many spiritual sons and daughters around the world. James is a graduate of Oklahoma State University with a Bachelors Degree in Psychology; Perkins School of Theology, Southern Methodist University, Dallas, Texas with a Master’s degree in Theology, and the US Army Command and General Staff College.

As you can see, this is a man that has proved his ministry. I take what he has to say very seriously, and I would greatly encourage you to do so as well.

Just recently, the Lord showed him that the “infidelity” of many “celebrities and leaders” in the Christian world will be exposed…

Then I began to see people being caught in infidelity. Some of these people were well known as celebrities and leaders. Others were unknown, but what was common to all was that they will soon be exposed.

I asked the Lord if this was about something in the natural or something spiritual, and the Lord said both. Then He said, “I cannot bless those who are unfaithful in their relationships with Me and their spouses.”

Then I saw some people being exposed. Instead of becoming humble and repenting, they became aggressive and defended their behavior based on things contrary to the Word of God and the social norms of the majority of people. Their attempts to justify their behavior made them look worse and increased the danger of their falling away. The real danger is that they have chosen to step outside the Lord’s blessing and favor. When they are exposed, they will not have a defender or advocate, and their fall will be great.

There is a strong need for repentance and getting back into a right relationship with the Lord and other people. To some of you, I am supposed to say, “You are in great danger because you have stepped out from under your cover of protection. Don’t try to mix your faith in the Lord with other belief systems. Do not embrace socially accepted but immoral lifestyles. The patience of the Lord is at an end. Repent now and get back into a right relationship with your first love.”

For those that want to avoid judgment, that last sentence is the key.

Just repent and the Lord will forgive everything that you have done.

But if you choose not to repent, you will reap what you have sown.

I will not hold you guiltless who have exchanged My Truth for your own version of truth. I will not hear your pleas who have taught mistruths as My Word. You have misrepresented Me and your eternity waits. It is not a pretty one. You who have felt comfortable in your pulpits teaching My precious ones that sin is allowed, that I am not a God who judges. Repent now, for your end is at hand.

Judgment begins in My House and that judgment starts now. I will strike you with incurable diseases, you who refuse to represent Me truly, you who teach lies and call them My Word. I will strike you and I will refuse to hear your pleas for mercy, and worse awaits you after you leave the earth.

I AM a God who judges His people, as My Word declares, and I will judge you now who refuse to repent of teaching lies.

This really resonated with me, because I know firsthand that sin is being preached in pulpits all over America. Excuses are being made for just about every form of sexual immorality that you can possibly imagine, and on top of that, many of these preachers are embracing the doctrine that nobody goes to hell.

So they are teaching people that it is okay to sin now, and that there won’t even be any accountability after you die.

Of course it isn’t just individuals that will be judged. Prophetic voices such as Stephen Hanson are warning that judgment is imminent for our nation as a whole as well…

This nation will be brought to its knees. The plans that some have made, to make this nation great, will fall to the ground in humiliation. For your sins and your arrogance will have caught-up with you on that day.

The nation will be split in two. The orders will be given to my angel that sits upon the heights of your nation. For too long, you have ignored the warnings from my true prophets.”

Personally, I can never understand why there is so much resistance to the true prophetic voices that are sounding the alarm all over America.

Yes, there are certainly a lot of false prophets running around out there these days. But there are also many that have very long track records of prophetic accuracy with clean, godly lives to back up those track records. In the Book of Joel we are promised that God will pour out His Spirit on all flesh in the last days, and that is precisely what is happening.

And even in the midst of all the darkness and chaos that are coming, God is going to be doing an amazing thing among His people. In my books, I refer quite a bit to the Remnant that God is raising up all over the world, and my wife and I are constantly praying that God would allow us to be part of this Remnant. In these last days God is going to raise up a Remnant that will keep His commandments, that will bring in the greatest harvest of souls the world has ever seen, and that will move in the fruit, gifts and power of the Holy Spirit like we haven’t seen since the Book of Acts.

You are in the fire here to be transformed, so that My heart and My perfect love are manifested in a dying and fallen realm. The birth pains come closer and closer now, as We are ready to give birth. You, My holy vessels, the sanctuaries of My Spirit are being prepared to receive My glory. My oil of anointing will fall upon you, igniting a passion and a desire in you, My people that will illuminate the earth like never before.

The labor has been difficult and painful and the contractions come yet even closer together now, as the darkness has intensified. Allow the fires of your tribulations to empty completely every effect of sin in your lives. As you remove the leaven in your lives, I, The King of Glory comes in.

Let us live our lives with passion, and let us definitely pray that we will “illuminate the earth like never before”.

Without a doubt, our world is becoming a very dark place, and great evil has infiltrated the Church. But the great cleansing of the Church that is coming will bring renewal, and out of that renewal a great move of God will be unleashed across the entire face of our planet.