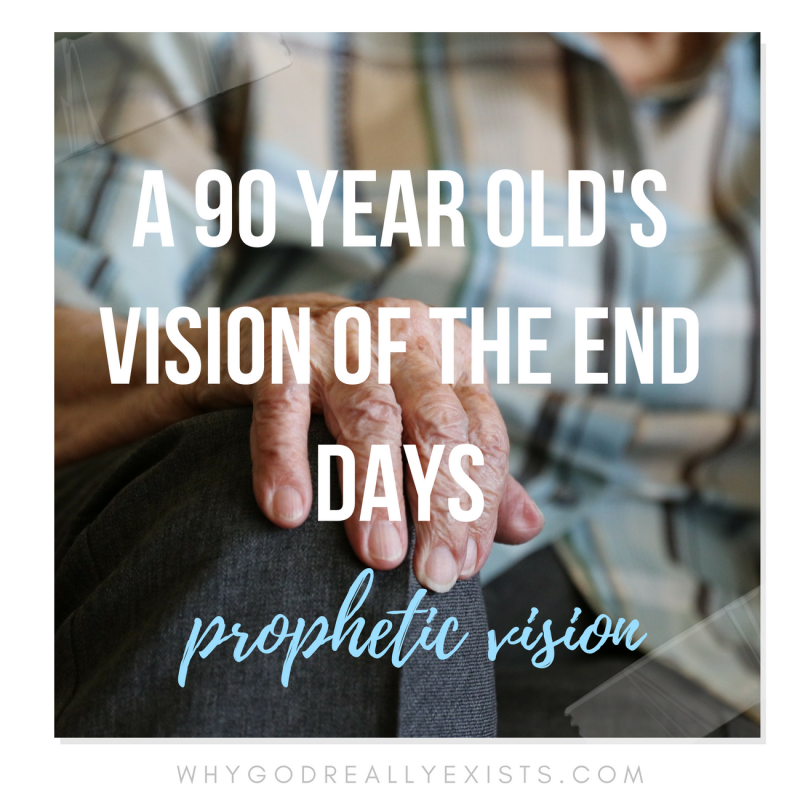 This prophecy was given by a 90 yr. old woman in Norway 42 years ago about events leading up to the second coming of Christ.

An Evangelist by the name of Emanuel Minos wrote the prophecy down in 1968 and thought it was so extreme that he put it away. He recently reviewed the prophecy and was amazed that what she saw is exactly what is happening today in our society.

The words of this prophecy were found at the above website.  In addition, they found additional evidence that verifies the person of  Emanuel Minos.  A contact surfaced, and she assured that this account are true and reliable. She relates that the first account has already been published in one of Norway’s Christian newspapers. The website of Dr. Emanuel Minos is active today and can be accessed, although the language on this site is Norwegian.

This is what she saw:“I saw the time just before the coming of Jesus and the outbreak of the Third World War. I saw the events with my natural eyes. I saw the world like a kind of a globe and saw Europe, land by land. I saw Scandinavia. I saw Norway. I saw certain things that would take place just before the return of Jesus, and just before the last calamity happens, a calamity the likes of which we have never before experienced.

2. “A lukewarmness without parallel will take hold of the Christians, a falling away from true, living Christianity. Christians will not be open for penetrating preaching. They will not, like in earlier times, want to hear of sin and grace, law and gospel, repentance and restoration. There will come a substitute instead: prosperity  Christianity.

“The important thing will be to have success, to be something; to have material things, things that God never promised us in this way. Churches and prayer houses will be emptier and emptier. Instead of the preaching we have been used to for generations -like, to take your cross up and follow Jesus, – entertainment, art and culture will invade the churches where there should have been gatherings for repentance and revival. This will increase markedly just before the return of Jesus.

3. “There will be a moral disintegration that old Norway has never experienced the likes of. People will live together like married without being married. Much uncleanness before marriage, and much infidelity in marriage will become the natural, and it will be justified from every angle. It will even enter Christian circles and we pet it – even sin against nature. Just before Jesus return there will be TV- programs like we have never experienced.

“TV will be filled with such horrible violence that it teaches people to murder and destroy each other, and it will be unsafe in our streets. People will copy what they see. There will not be only one ‘station’ on TV, it will be filled with ‘stations.’ TV will be just like the radio where we have many ‘stations,’ and it will be filled with violence. People will use it for entertainment. We will see terrible scenes of murder and destruction one of the other, and this will spread in society. Sex scenes will also be shown on the screen, the most intimate things that takes place in a marriage.”  There the old woman said: “It will happen, and you will see it. All we have had before will be broken down, and the most indecent things will pass before our eyes.”

4. “People from poor countries will stream to Europe. They will also come to Scandinavia – and Norway. There will be so many of them that people will begin to dislike them and become hard with them. They will be treated like the Jews before the Second World War. Then the full measure of our sins will have been reached

The tears streamed from the old woman’s eyes down her cheeks. “I will not see it, but you will. Then suddenly, Jesus will come and the Third World War breaks out. It will be a short war.”

“All that I have seen of war before is only child’s play compared to this one, and it will be ended with a nuclear atom bomb. The air will be so polluted that one cannot draw one’s breath. It will cover several continents, America, Japan, Australia and the wealthy nations. The water will be ruined . We can no longer till the soil. The result will be that only a remnant will remain. The remnant in the wealthy countries will try to flee to the poor countries, but they will be as hard on us as we were on them.

“I am so glad that I will not see it, but when the time draws near, you must take courage and tell this. I have received it from God, and nothing of it goes against what the Bible tells.

“The one who has his sin forgiven and has Jesus as Savior and Lord, is safe.”