The Battle of Jericho, described in the book Joshua is the terrific account of the Israelites’ return to the promised land from bondage in Egypt, led by Joshua, the successor to Moses. Archaeological evidence indicates that Jericho was a prosperous city with food and water, and a wall of protection that was impenetrable.  Is there archaeological proof that backs the account found in the book of Joshua of Jericho? YES!  It did happen.

The Short Version Of The Story

We all know the famous account of Moses who led believers through the Red Sea.  The original plan was to lead the people from Egypt straight to the Promised Land.   The people sinned by worshiping a golden calf, causing them to be set off course for about 40 years.  By 1400 BC the disobedient generation who fled Egypt had all died, and the next generation was ready to conquer a land which had been promised to them 500 years beforehand. Joshua takes over command of the people, and his first act is leading them through a river which was parted just like the Red Sea.  He simply let the people carry the ark of God in front of the people, and the water naturally parted.  His next challenge was to conquer the heavily fortified ancient city of Jericho.   Here is where we pick up the account of Jericho:

The Israelites were told by God to march around the city each day for seven days, blowing their horns. “And you shall compass the city, all you men of war, and go round about the city once.  Thus shall you do six days.  And the seven Priests shall bear before the Ark seven trumpets of rams horns; and the seventh day you shall compass the city seven times, and the Priests shall blow with the trumpets.  And it shall come to pass, that when they make a long blast with the ram’s horn, and when you hear the sound of the trumpet, all the people shall shout with a great shout, and the wall of the city shall fall down flat, and the people shall ascend up every man straight [i.e., straight up and over] before him”

Answers in Genesis describe the walls as humanly impossible for anyone to penetrate.  Jericho was surrounded by an embankment, with an additional stone wall at its base. 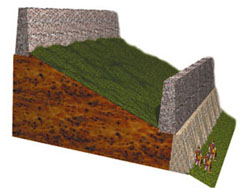 So as we can see, these walls were thick, and would take the use of heavy equipment today to move around.  They simply wouldn’t fall on their own.

The first documented excavation occurred in 1867 by the famous British engineer Charles Warren.  Warren was interested in finding out whether the large mound was natural or man-made.  He concluded that the remains of what he found was likely the evidence of an ancient castle.

British archaeologist John Garstang, excavated the site in the 1930s, and was one of the first to lead an excavation using modern archaeological methods.   He announced with much excitement that he had found the fallen walls dating to the time of the biblical Battle of Jericho.  The two most notable discoveries by Garstang’s team was a collapsed city wall at the top of the mound, and the evidence of 3 different vertical walls.

Archaeologists have always agreed on the location of the site to be Jericho, but the date of the wall itself was debatable. Garstang sought for the opinion of British archaeologist Kathleen Kenyon to study his findings. Kenyon then led her own excavations from 1952-1958, and dated the destruction of the walled city to the middle of the 16th century (c. 1550 BC), making it too early to match the Bible story.  What they ended up discovering was 20 different periods with evidence of rebuilt areas along with repairs.

According to Answers In Genesis,  interesting evidence comes from the bible itself.  It tells us that Jericho was burned with fire.  The meticulous work of Kenyon showed that Jericho was burned by fire. Unfortunately, she mis-dated her finds.  She concluded that the Bronze Age city of Jericho was destroyed about 1550 B.C. by the Egyptians. An in-depth analysis of the evidence, however, reveals that the destruction took place around 1400 B.C, exactly when the Bible says the conquest occurred.  Garstang dated, based on pottery found at the same depth, the city was destroyed around 1400 BC.

Archaeologists discovered a layer of burned ash and debris about three feet thick. Kenyon described the massive devastation as follows.

“The destruction was complete. Walls and floors were blackened or reddened by fire, and every room was filled with fallen bricks, timbers, and household utensils; in most rooms the fallen debris was heavily burnt, but the collapse of the walls of the eastern rooms seems to have taken place before they were affected by the fire.”

“In a word, in all material details and in date the fall of Jericho took place as described in the Biblical narrative. Our demonstration is limited, however, to material observations: the walls fell, shaken apparently by earthquake, and the city was destroyed by fire, about 1400 B.C. These are the basic facts resulting from our investigations. The link with Joshua and the Israelites is only circumstantial but it seems to be solid and without a flaw.”

Dr. Bryant G. Wood revisited the in depth archaeological reports of Kathleen Kenyon, and also supports a time of 1400 BC.

Garstang and Kenyon both discovered a lot of artifacts from Jericho. Kenyon identified 20 different architectural phases. What they found was astonishing.  Amazing, Kenyon analyzed more than 20 different time periods of Jericho, one layer of history which was closely was in line with the time of the biblical account.

A summary given by Reclaiming The Mind shows us the archaeological findings correlate with the biblical narrative:

Archaeologists Garstang and Kenyon found many storage jars full of grain within the areas that were burned.  The jars were more than 3,000 years old and were filled with burned grain! Many of the jars were still sealed shut, so the city was full of food while it was being destroyed.  Grain was valuable as a source of food and commodity which could be bartered, so why was it left behind?  Joshua commanded the Israelites to leave all that was found in city, which was to be dedicated to the Lord -Joshua 6:17.  This discovery gives a picture of the amazing obedience of the Israelites, especially if they have been fed a diet of manna for 40 years!  Who wouldn’t want to make bread?

Jericho is a place in scripture where we see God doesn’t abandon his people.  God will always provide for our needs, especially when we find ourselves facing enormous “walls” that are impossible to break down by human strength. If we put our faith in God and follow His commandments, He will perform “great and mighty things” ( Jeremiah 33:3) and give us the victory.

– The Walls of Jericho –Answers in Genesis

– Jericho: Does the Evidence Disprove or Prove the Bible?–biblearchaeology.org

– Jericho – The Walls DID Come Tumbling Down! – Bible Probe 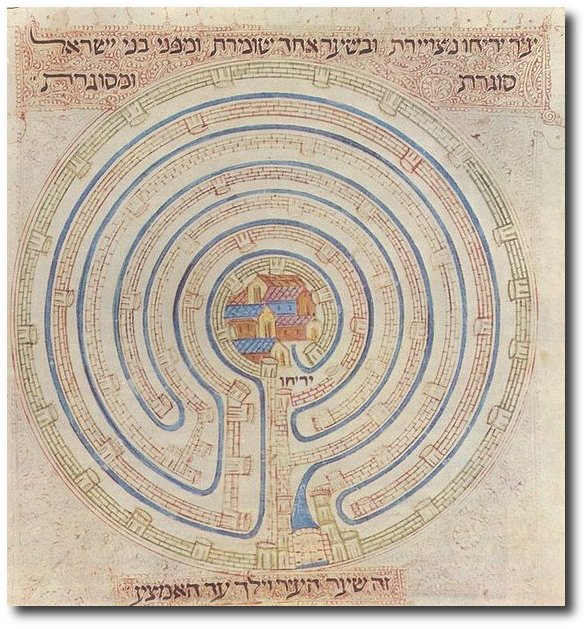