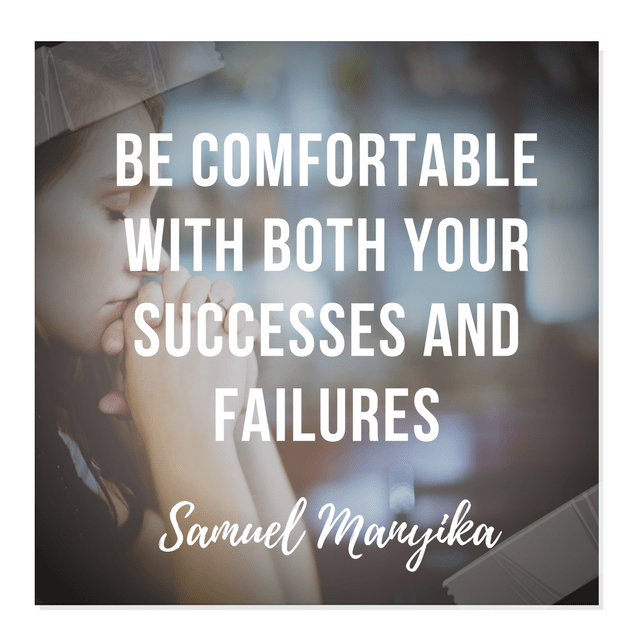 If however you are honest you will admit or allude to the fact that you would not have got to the top without the ladder.

In electricity there is positive and negative, there is no electrical flow that will power anything in the absence of the other. I have two arms the left and the right, I boast a lot about what I can do with my right hand but you will never hear me say my left arm is useless and that it needs to be cut off. I would be lying and I CERTAINLY DON’T WANT TO LOOSE MY LEFT ARM. My left leg does not appear to do much, but I am smart enough to know that I need it.

If I spend a week eating bad food, sleeping on the floor in a lice infested room, I will then swear that I will fight poverty till I die.

Christians are the worst when it comes to discomfort with failure. They believe that the spirit of God and his word are designed to produce guilt which then should be carried for the rest of one’s life. So whenever an anointed message which reveals that something that one did is wrong is preached, it should be like a 50kg bag of guilt is put on their shoulders.

Imagine how many bags they now carry if they are regular church goers! What a load!
Everything that God says should bring a positive result. The bible teaches that the entrance of God’s word brings light and gives understanding to the simple.
Understanding brings LIGHT not GUILT.

This is not about encouraging failure but about putting it in perspective and not allowing it, satan, an oversensitive and unbalanced conscience, people to destroy you using it. God forbid that you should lead a life of perpetual failure, but believe it or not you will fail somewhere.

The bible does not say th devil is a FALSE accuser, he may sometimes accuse us falsely but I have discovered that the only time satan tells the truth is when he is accusing believers of sin or failure before God, what he will be saying is true. We sin, we FAIL!

That is what the blood of Jesus fights against-it is like God says to satan “So what, do you want them to commit suicide,I have forgiven them.”

When you do wrong and get corrected, through the preaching of God’s word, through your parental instruction and rebuke, through church leadership or friends see the LIGHT not the GUILT, accept it.

If you have a season of regret that is fine the LESSON not the GUILT will be sinking in. After this you must draw the line and become comfortable with your failure otherwise beyond that it becomes a PERFORMANCE,SURVIVAL,JOY,CONFIDENCE and DESTINY KILLER.

Do not not let anyone and I mean ANYONE load it over you because of your failure, your spiritual and physical survival will depend on it. Your failure will become like your left foot, left leg, nothing that you can boast about but it is there to help you and it helped you to have a real and balanced view and appreciation of life.

Learn to stand up to bullies. Bullies are those individuals or demons who demand or want to excesise more control over us than legitimate authority over our life does.

For instance I used to be left in the care of a relative who lived on my father’s property with us. He loved using the belt and the stick. I complained to my mother but those days it was like it was only an elders’ version of an explanation which could stick or be accepted. So the next time he tried to hit me with a stick I grabbed hold of it and broke it in two and ran away. He shouted at me to come back and I gave him the final one that broke him. I said “You are not my father, this is not your house and you have no right to beat me.”

I was thirteen years old, from that day he treated me with respect.

We must not submit to authority which imposes itself over us. In church some people demand more from us than the Pastor who is walking us to victory, some people by virtue of being elders can put demands on us which are not morally legitimate. Members of our churches or communities can turn us into emotional wrecks, blackmail us because of their expectations, twisted legalistic interpretations of the bible, or something we did not do right. Remember they are not God.Give in to such machinations and you are HISTORY.
Vamwe vanhu vanoda kuvhunzwa kuti “Zvamasimbirira zvangu,gara zvekumba kwenyu makapedza?

Both your successes and failures make the totality of who you are.

We do not seek failure, if however we do fail we should put it in perspective otherwise our misplaced perception of it, someone or the enemy will use it to destroy us.

We are not to be rebellious, we should recognize the authorities that God puts over us to help us grow and even to rebuke us. However we should not submit to that which is designed to destroy us emotionally, spiritually or physically.

WE ARE DESIGNED TO SURVIVE THROUGH GOD’S WORD BE HEALED BY HIS SPIRIT AND MOVE ON.