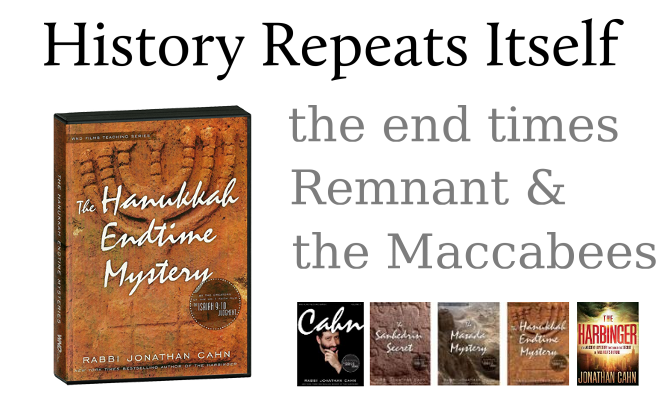 Jonathan opens up how Hanukkah contains some of the most amazingly detailed revelations of the end times. In recent years, many people have made the connection between the appointed festivals in Leviticus 23 and later events in history.

For example, Feast of Tabernackles is widely known to be a foreshadow of the Messiahs birth. Passover foreshadowed Yeshua Jesus as the final lamb sacrificed for the world’s sins. First Fruits happened to be the exact day of Yeshua’s resurrection. Feast of Trumpets is celebrated as the day Yeshua will gather his elect to the great supper in heaven, and several days later will return with his people on Atonement, where the battle of Armageddon takes place.  Pentecost happens to be when the law was given, and later on the exact same date, the Holy Spirit was poured out.

Even though Hanukkah doesn’t appear in Leviticus 23, we do know that Yeshua Jesus celebrated this festival.

“At that time the festival of the Dedication took place in Jerusalem. It was winter, and Jesus was walking in the temple, in the portico of Solomon. – John 10:22, 23

What Does Hanukkah Celebrate?

Hanukkah is a festival that commemorates the purification and rededication of the Temple by Judas Maccabeus in the 9th month, 25th day, 165 BC. Hanukkah usually begins in December. Three years prior, Antiochus IV, the Syrian king, defiled the Temple by erecting an idol to the Greek god Zeus. It was there that Antiochus IV sacrificed a pig on the altar in the Temple and proclaiming himself to be a god… 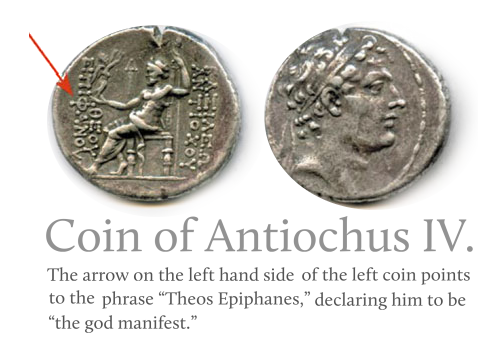 At this time anyone who practiced Judaism was a target under this new regime. It was also decreed that Torah (the Law of God) could not be studied under penalty of death; also Jewish males were not to be circumcised and it was forbidden to keep the Sabbath.

During this new regency, Antiochus sent troops from village to village with a statue of himself, ordering people to bow down to it. While there were many believers who submitted to this new authority, there was a select few who didn’t bow their knee to this false god.

The tipping point came when Antiochus’s troops arrived in the village of Modi’im. An elderly man stepped forward to comply with the order, but a priest who would not submit, Mattathias of the Hasmonean family, thrust a spear through the elderly man, killing one of the Seleucid soldiers. This event began the Maccabean revolt. Mattathias, along with five sons and others fled into the Gophna Hills and conducted a war against the Seleucids for three years.

In the DVD “The Hanukkah Endtime Mystery”, Jonathan Cahn shows graphic drawings of these wars, giving you a picture in your mind how this war might have taken place. War after war, this remnant group of believers were out numbered in every way, but overcame by the Power of Yahweh.   Jonathan Cahn, paints a picture for us, showing the connections between the Maccabean revolt and the startling parallels of what we are told faces the end times believers.

Most people don’t know the history behind Hanukkah, other than lighting the manorah during this eight-day celebration, but it appears like the other holidays we celebrate in Leviticus, that this holiday too, gives us a clear picture of something to be full filled in the future.

The shocking history of the Maccabees shows a small group of passionate believers in Yahweh who would would not toss aside their faith to conform to the degenerating society around them, and a tyrant who presents himself as god.

The Antichrist is most often referred to another tyrant in the last days.  According to the bible this person will be history’s last and most terrible dictator. During his rise to power, he will present himself as a man of peace. His sweet-sounding words of peace will not match his terrible acts of war. He will present himself as a lamb, but he will really be a wolf in sheep’s clothing.  Apostle Paul described these last days as “perilous times” (2 Timothy 3:1). Wars and rumors of wars, economic disasters, starvation and sickness will be predominant.

Just Like Antiochus IV defiled the Temple, the  Antichrist will also defile the re-built temple:

Who are the Remnant believers in Revelation?

The book of Revelation speaks of the end times and the true people of God, a group of people called the “Remnant” which Satan will make war against.

Revelation 12:17 “And the dragon [Satan] was wroth with the woman [Church], and went to make war with the remnant of her seed, which keep the Commandments of God, and have the testimony of Jesus Christ.”

We see here that the Remnant has both the testimony of Yeshua Jesus (The Saving Grace), and also keeps the commandments of God, (Keeps The Torah)

A remnant has been said to be the small piece of something left over from the original. It is identical to the original, but in smaller proportion. When the Bible speaks of the remnant Church, it is referring to a small proportion of God’s people at the end of time who have clung to the unadulterated belief system, identical to the faith and doctrines of the early Christian Church.

This Remnant will be comprised of people who have not have allowed pagan practices introduced into their belief system as it has unbeknown to many Churches.

What Does The Bible Tell Us About The Early Church?

1.  It shows that they were a Holy Spirit driven people. They were on fire for God. Many miraculous healings were done as a sign that these people were empowered by the true God seen in Acts 4:13.  This early Church believed in the Father, Son and Holy Spirit which the Bible calls the Godhead but is called the trinity by many.

2. They were a mission driven Church.  They were a people who followed the commandment and great commission that Yeshua Jesus gave them- To go into all the world and preach the gospel of Christ. Matthew 28:16–20

3.  They broke bread together.   They were also generous stewards, making sure that no one in their midst was left in need.  They worked as a team, caring for one another and went forward with one accord.

4. Many wonders and signs were shown through them.

5.  They had a strong praise and worship towards God continually.

6.  They had a strong prayer fife.

7.  They kept the seventh day Sabbath, (Friday sundown to Saturday sundown) staying faithful to the fourth Commandment of God to ‘Remember the Sabbath.’

8.  They kept the appointed festivals in Leviticus 23

-The Harbinger: The Ancient Mystery That Holds the Secret of America’s Future CD or Paperback – Buy it on Amazon for $12

-The Harbinger Companion With Study Guide Paperback $11 On Amazon

– The Harbinger Decoded DVD Buy it on Amazon for $10

-The Isaiah 9:10 Judgment: Is There an Ancient Mystery that Foretells America’s Future? DVD Buy it on Amazon for $16

-The Rabbi Who Found Messiah Buy it on Amazon$13

Acts 4:13 “Now when they saw the boldness of Peter and John, and perceived that they were unlearned and ignorant men, they marvelled; and they took knowledge of them, that they had been with Jesus.”

“And when they heard that, they lifted up their voice to God with one accord, and said, Lord, thou art God, which hast made heaven, and earth, and the sea, and all that in them is: 25 Who by the mouth of thy servant David hast said, Why did the heathen rage, and the people imagine vain things? 26 The kings of the earth stood up, and the rulers were gathered together against the Lord, and against his Christ. 27 For of a truth against thy holy child Jesus, whom thou hast anointed, both Herod, and Pontius Pilate, with the Gentiles, and the people of Israel, were gathered together, 28 For to do whatsoever thy hand and thy counsel determined before to be done. 29 And now, Lord, behold their threatenings: and grant unto thy servants, that with all boldness they may speak thy word, 30 By stretching forth thine hand to heal; and that signs and wonders may be done by the name of thy holy child Jesus. 31 And when they had prayed, the place was shaken where they were assembled together; and they were all filled with the Holy Ghost, and they spake the word of God with boldness. 32 And the multitude of them that believed were of one heart and of one soul: neither said any of them that ought of the things which he possessed was his own; but they had all things common. 33 And with great power gave the apostles witness of the resurrection of the Lord Jesus: and great grace was upon them all. 34 Neither was there any among them that lacked: for as many as were possessors of lands or houses sold them, and brought the prices of the things that were sold, 35 And laid them down at the apostles’ feet: and distribution was made unto every man according as he had need.”

Acts 2:42-47 “And they continued stedfastly in the apostles’ doctrine and fellowship, and in breaking of bread, and in prayers. 43 And fear came upon every soul: and many wonders and signs were done by the apostles. 44 And all that believed were together, and had all things common; 45 And sold their possessions and goods, and parted them to all men, as every man had need. 46 And they, continuing daily with one accord in the temple, and breaking bread from house to house, did eat their meat with gladness and singleness of heart, 47 Praising God, and having favour with all the people. And the Lord added to the Church daily such as should be saved.”