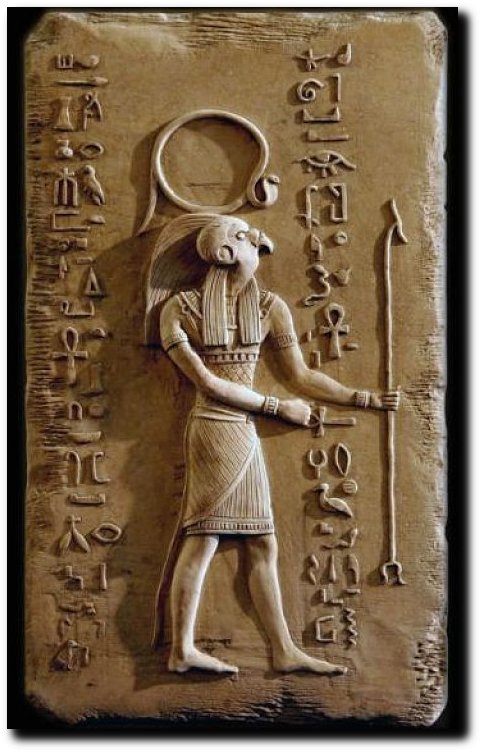 One of the latest trends among skeptics of Christianity is to claim that many of the Christian stories about Jesus were derived from earlier myths about pagan gods. In particular, one of the favorite “myths” that the skeptics like to point to in this regard is the Egyptian “god” Horus.

Is there anything at all factual about these claims?

As you will see, there isn’t, and it absolutely amazes me how gullible some people are.

The traditions regarding Jesus and Horus are nothing alike, and many of the people who are promoting this fraud even know this.

However, there are A LOT of Christians out there who don’t know the facts and who are being sucked in to these lies.

Below is an outstanding outline from another blog (please visit it if you have time) that does a good job of ripping apart the claims regarding Horus:

Ending the Myth of Horus

I’ve heard repeated here several times that Horus, an Egyptian god, is carbon copy of Jesus. The obvious implication by those that have made this statement is that Jesus is a copycat version of an earlier Egyptian deity. The purpose of this entry is to disembowel that proposition once and for all.

When I first heard that Horus was the inspiration for Jesus several years ago, I didn’t give it much credence because I couldn’t establish any source material for the claims. I still can’t, but the internet is as adept at allowing anybody and everybody to pass on misinformation.

Upon further research, I’ve concluded that this theory originated with Gerald Massey, an English poet, born 1828, died 1927. He published primarily poems, but had an interest in Egypt. He parlayed that interest in Egypt into several books and lectures in which he set forth the proposition that Horus was in essence the first Jesus, and Jesus was a cheap imitation. The primary basis for his writing is the Egyptian Book of the Dead. This is available on-line and you can easily look it up to read it yourself. Be forewarned that forced reading of this would be an extremely efficient form of torture.

It should be noted that Massey’s actual proposition was that Jesus was a copycat from more than just Horus. According to Massey, Jesus was a compilation of an innumerable number of Egyptian deities. There were over 2,000 deities who had every human and godlike characteristic one can think of, excepting Superman’s power to stop a speeding bullet.

Since Massey, there is a dearth of anybody with any credentials that has adopted a straight Horus=Jesus theory. There is a one individual that has adopted some of Massey’s thoughts and incorporated them into a book-The Christ Conspiracy. This appears to be the basis for the claims that I see. The author is Acharya S. I note that Richard Price, a noted Christ Myther, and one that I take much more seriously then Acharya, said the following:

“Those of us who uphold any version of the controversial Christ Myth theory find ourselves immediately the object not just of criticism, but even of ridicule. And it causes us chagrin to be lumped together with certain writers with whom we share the Christ Myth butt little else…..

His other criticism, like mine, is that she uses very dated sources (19th Century) who were in Price’s words “eccentrics, freethinkers, and theosophists.”

Les, I am using your post from 1/3/05 as an example of the claims because you carry more credibility than most. That said here are the claims and what I have found:

Claim #1-Horus and Jesus are born from a virgin.

Horus’s mother is Isis. Isis was married to Osiris. We do not know for what length of time, but presumably the marriage was consummated. Whether it was or wasn’t doesn’t matter though. After Osiris is killed, Isis puts him back together again (he was hacked into 14 pieces) except for his penis which was tossed in a river or a lake. Iris fashions a substitute penis for him, humps him and here comes Horus. There is nothing virginal about that.

Claim #2-Both Horus and Jesus were born to a Mary and Joseph. (Seb)

As noted Isis is Horus’s mother’s name not Mary. In addition, Seb is not Horus’s father, Osiris is. Seb is Osiris’s father. Further, Seb is a distinct name from Joseph. Putting them side by side does not make them synonyms, and that appears to be what was done here.

Claim #3-Both were born of royal descent.

Claim #4-Both births were announced by angels and witnessed by shepherds.

Claim #5-Both were heralded by stars and angels.

There is no star that heralded Horus’s birth nor is there any angel announcing it. Archarya in a footnote in The Origins of Christianity indicates that that there are three stars named the three kings in Orion and then relates this to the birth of Jesus. When we look to the stories regarding Horus, we find no star or angel announcing his birth. To the extent that Acharya S relies upon Massey and Massey relies upon what is depicted in the panels at Luxor see (from an atheist) further regarding virgin birth and pronouncement by angels [link to www.frontline-apologetics.com]

Claim #6-Both had later visitors (Horus-3 deities and Jesus-3 wisemen.)

There is no indication that there ever were 3 wisemen. The bible never mentions the number of wisemen, nor is there any document that reflects 3 deities at the birth of Horus. See the website referenced in Claim #5.

Claim #7-Both had murder plots against them.

There is mention that Seth did want to kill Horus, and Herod wanted to kill Jesus. so this is accurate.

Claim#8-Both came of age at 12, were baptized and their baptizers were executed.

There is no indication that Horus was preaching in a temple when he was 12. In fact, Massey indicates that Hours the child was depicted as a “weakling.” That doesn’t jive with story of Jesus preaching in the temple. Again this appears to have been a confabulation from Acharya and repeated by others.

Horus was never baptized in any of the Horus stories. In addition, Acharya mentions that John the Baptist is actually Anup the Baptizer. This individual is never mentioned anywhere in any Horus account. There is not even a footnote in Archaya’s on-line work The Origins of Christianity to support this. There is nothing.

According to the Horus accounts, Horus had four semi-gods that were followers. There is some indication of 16 human followers and an unknown number of blacksmiths that went into battle with him. Horus did not have 12 disciples. Jesus reportedly did. Acharya failed to give a footnote to support this.

Massey points to a mural in the Book of Hades in which there are twelve reapers. Horus is not present in this scene. For Massey to make this connection he goes to a different scene within the same mural. In this scene there is a picture of a god whose name is the Master of Joy. Horus is never depicted although in other murals the artists do depict Horus. Had the artists ascribed 12 reapers in any relation to Horus all they had to do was put Horus at the scene. They did not.

Claim #10-Both walked on water.

Horus didn’t, or at least there is no record that I can find that he did. Massey does not maintain that Hours did. Massey uses wild conjecture to connect the story of fish man, Oannes, not Horus, to Jesus. Oannes came out of the sea during the day, and went back into the sea at night. Massey makes the two analogous because by his calculations, Jesus walked on water during the day.

As to Acharya, she as usual provides nothing to substantiate this.

This is true although the miracles were different in scope and nature.

The actual claim is that Horus raised Osiris from the dead and that the name Osiris morphed to Lazarus. It doesn’t matter because Horus did not bring Osiris back to life. There is no mention of this in any document regarding the story. Horus did avenge Osiris’s death, but that did not raise Osiris from the dead.

Claim #13-Both held a Sermon on the Mount; both were transfigured on a mountain, died by crucifixion along with two thieves and were buried in tombs where they paid a quick visit to Hell and then rose from the dead after 3 days time, both resurrections were witness by women, and both will supposedly reign for 1,000 years in the Millennium.

These are the most damning claims if they were proven true in my opinion. Yet, I can locate none of this. No sermon, no transfiguration, certainly no crucifixion w/ two thieves, no trip to hell and no resurrection. There was an incident in which Horus was torn to pieces and Iris requested the crocodile god to fish him out of the water he was tossed into, which was done, but that’s it. I am at a loss to refute this because I can not find anything to support it.

Massey does compare a story about the Autumn Equinox related to Osiris, not Horus, as the symbolic crucifixion. There is no indication that Horus is involved in any way. There is no mention by Massey of any Sermon on the Mount. No mention or any actual crucifixion, no two thieves, no burial in a tomb. Massey does not maintain that anything of the sort occurred with Horus.

In short, of the claims outlined in this entry, I find the comparison between Horus and Jesus to consist of the following: they were of royal descent, they allegedly worked miracles and there were murder plots against them.