One of the most dramatic developments in prophecy is seen in what God is doing through Muslims throughout the Middle East and even in the United States.  Many Muslims are seeing dreams and visions of Jesus.  They are coming into churches explaining that they have already converted and now need a Bible and guidance on how to follow Jesus. This is in fulfillment of Biblical prophecy.  Joel 2:28 “And it shall come to pass afterward,that I will pour out my Spirit on all flesh;your sons and your daughters shall prophesy,your old men shall dream dreams,and your young men shall see visions“ This is what happening in these last days. Muslims Encountering Jesus In Unusual Dreams Reported that among African Muslims, “42 percent of the new believers come to Christ through visions, dreams, angelic appearances and hearing God’s voice.”  Over one-fourth of those surveyed state quite emphatically that dreams and visions were key in drawing them to Christ and sustaining them through difficult times. Rick Love, International Director of Frontiers, has recognized the pattern as well. He writes that, “Just as God used a vision to convert Paul, in like manner He reveals Himself to Muslims through dreams and visions. Just as God prepared Cornelius to hear the Gospel through a vision, so God is preparing a multitude of Muslims to respond to His good news.”

The great majority of dreams seem to fall into one of two broad categories. The first could be considered the preparatory dream.  For example like Christ appearing in a white robe, the vision confirms thoughts or conversations one has been having about Christ or the Christian faith.  The second could be called the empowering dream. Here the dream or vision commonly gives the believer strength in the face of persecution.  Short of persecution, it may embolden believers, strengthening the nature of their witness.

For decades, a phenomenon has been recurring in the Muslim world. Men and women, without any knowledge of the Gospel and without any contact with Christians, have been forever transformed after experiencing dreams and visions of Jesus Christ. Here are five stories of former Muslims who now know Jesus as their Savior, recreated in docu-drama format. Produced in their original languages with English subtitles. Ali is a Turkish man in bondage to alcohol. While making the pilgrimage to Mecca, hoping to be freed of his addiction and be led in the way of a true Muslim, he found Christ instead. (Turkish, 40 minutes) Dini is an Indonesian teenager who became a Christian on a night that Muslims individualize their prayers to Allah. (Indonesian, 42 minutes) Mohammed is a herdsman in Nigeria who survived various attempts on his life by his father and eventually led his father to faith in Christ. (Hausa, 46 minutes)  Khalil was a radical Egyptian terrorist who was transformed when Jesus appeared to him and changed his heart. (Arabic, 29 minutes) Khosrow is a young Iranian man who was depressed and without hope until he met Jesus. Now joy fills his heart. (Farsi, 30 minutes)

*In Afghanistan, for example, there were only 17 known evangelical Christians in the country before al-Qaeda attacked the United States. Today, there are well over 10,000 Afghan followers of Christ

* In Iraq, there was only a handful of Muslim converts to Christianity back in 1979 when Saddam Hussein took full control of that country. Yet today, there are more than 70,000 Iraqi Muslim background believers in Jesus (MBBs), approximately 50,000 who came to Christ as refugees in Jordan after the first Gulf War in 1990-91, and another 20,000 who have come to Christ since the fall of Saddam Hussein.

*In Kazakhstan, there were only three known evangelical Christian believers before the collapse of the Soviet Union in 1991. Today there are more than 15,000 Kazakh Christians, and more than 100,000 Christians of all ethnicities.

* Egypt- More than 1 million Egyptians have trusted Christ over the past decade or so. The Egyptian Bible Society told me they used to sell about 3,000 copies of the Jesus film a year in the early 1990s. But in 2005 they sold 600,000 copies, plus 750,000 copies of the Bible on tape (in Arabic) and about a half million copies of the Arabic New Testament. “Egyptians are increasingly hungry for God’s Word,” an Egyptian Christian leader told me. Last Christmas, I had the privilege of visiting the largest Christian congregation in the Middle East, which meets in an enormous cave on the outskirts of Cairo. Some 10,000 believers worship there every weekend. A prayer conference the church held in May 2005 drew some 20,000 believers.

In Mina’s book she tells of the Lord Jesus’ miraculous radiant appearance to an elderly Muslim theologian in Iran., and about Jesus telling this man he is not Allah! Jesus then tells this man that He is “the Bread of Life”, and words similar to His (Jesus’) blood washes sins away. Realizing whom he is dealing with, the man asks Jesus to accept him.

A North African believer found the needed strength to face his
imprisonment from a dream he had while imprisoned for his faith. In it, he saw thousands of believers pouring through the streets of his city, openly proclaiming their faith in his restricted country. While in prison, he was tortured, suspended upside-down naked for hours, beaten with electrified rods and repeatedly threatened with execution. His vision of a day when people of his country would openly proclaim their faith in the streets gave him great strength to persevere.
One Egyptian Muslim was reading the Injil (Gospel), when he came to Luke 3, where the Holy Spirit descended on Jesus in the form of a dove. God said, “This is my son, in whom I am well pleased.” As he read those words, a stormy wind broke into his room. A voice spoke to him saying, “I am Jesus Christ, whom you hate. I am the Lord whom you are looking for.” He recalls that he “wept and wept, accepting Jesus from that time.” 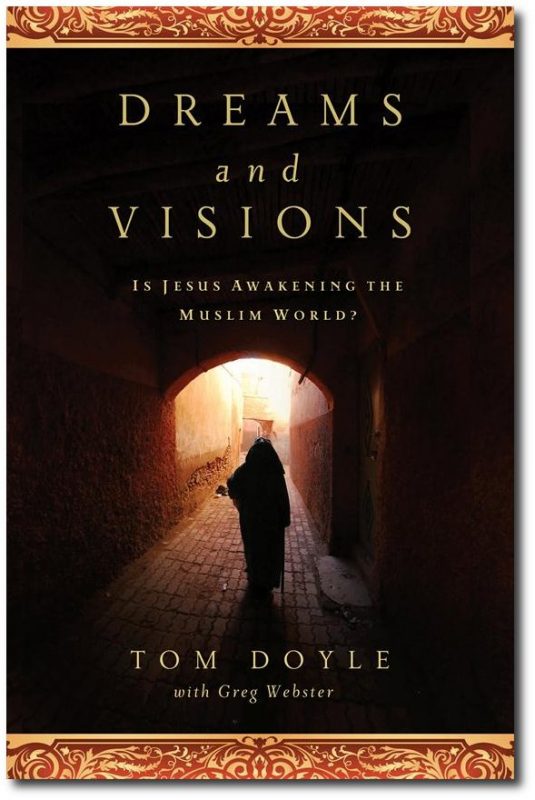 Dreams and Visions: Is Jesus Awakening the Muslim World

What would you do if Jesus appeared to you in a dream? What if He came to you in a vision and told you to follow Him? What if these visions continued for over thirty days? would you believe? Would you put your trust in him? Would you devote your life to him?

Would you if you were Muslim? Pastor Tom Doyle has spent eleven years as a  full-time missionary in the Middle East and Central Asia, spreading the word of Jesus Christ. Throughout his journey he has encountered a staggering number of Muslims who were first introduced to Jesus through a vision or dream so powerful that they eventually turned from their lifelong religion of Islam and embraced Christ as their Savior. Despite living in a culture where converting to Christianity can result in execution, these former Muslims have found hope, peace, and inspiration that comes from knowing Christ. Their stories will amaze you. Jesus is reaching out to the Muslims and they are responding. Did you know that Iran has the fastest growing church in the world? Dreams and Visions is a remarkable collection of stories directly from the world of Islam. Doyle not only relates these stories, but also addresses the questions: Why would God use dreams to reach the Muslim world? Can dreams be trusted? What happens after these dreams or visions occur? Travel to the heart of the Middle East to meet new believers who have truly been touched by Jesus in the most miraculous way, through their nightly dreams.

The celebration marked an outgrowth of her ministry, one of its kind in the Middle East. A few years ago, Dunham established a church in the West Bank city of Jericho.

“We have a church that reaches sometimes 600,” Dunham said. “And what you’ll see is just Muslims lifting their hands to the Lord. And they’re not there because I went house to house and invited any of them. They’re there because they’ve had a dream or a vision, or a visitation from the Spirit of the Lord. And so they’ve come to find out about Jesus.”

Latifa is one of the people from Jericho who have had a dream about Jesus. She explained, “The dream, when I sleeping — I see a Man dressed in white and He comes to ask me, ‘What is your name?’ And I am afraid at first. But He told me, ‘Don’t be afraid. I am Jesus.'”

Others have experienced miracles. “Tuesday, I think there was either two or three who had deaf ears — one had never spoke before,” Dunham said. “Tuesday was just full of miracles. A lot of the people here were at our service Tuesday – they were here, they were talking, they were moving. I’ve just seen the Lord move.

Even we think sometimes that they have to be fasting and they have to be Christians to get healed, but I’m telling you today that God’s healing the Muslims.” Jan, a helper at the event, said, “People need to know that it’s not a bad report all the time. God does good things in spite of what the news shows. People need to know that God is busy, He’s at work. He’s good.” But establishing a church in Jericho was not easy for Dunham.

“When I first went to Jericho about four years ago, they talked about me in every mosque,” Dunham said. “They wanted to execute me.

They were giving us death threats by way of letters — me and my son — because we were handing out Gospel tracts. Well, the governor of Jericho called me into his office. He said, “we had a meeting and we feel if you want to give out Bibles and you want to give out those booklets, we don’t consider it evangelism any more.

Go ahead, Karen.” Dunham now tapes a television program out of Jericho. She says the best language to speak in these areas is the language of love. “The biggest lesson I’ve learned in the West Bank is that Jesus Christ loves everybody,” Dunham said. “Jesus loves them all. There’s nobody He don’t love. And there’s not a soul He can’t save.”

“They’ve heard me when I’m preaching, speaking in their own language,” she continued. “You can’t sit on a pew or sit at home and say I don’t have the language. The Lord said the language is love: ‘Just give them the Word, they’ll hear you, Karen.’ The language is love. There’s no reason why we can’t reach out to those Arab nations, reach out and show them what the arms of Jesus Christ – how big and how great and how awesome God is.”