Perry Stone has had a number of prophetic dreams of a tsunami hitting both coast lines. In fact, he has had the same dream from different angles showing a tsunami causing great destruction.

Here are some of the categories with this event foretold:

Read some of Perry Stones warnings below: 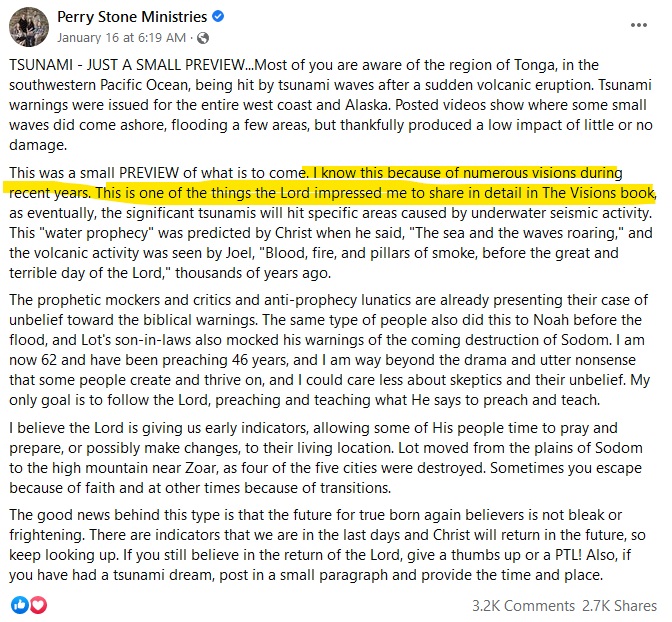 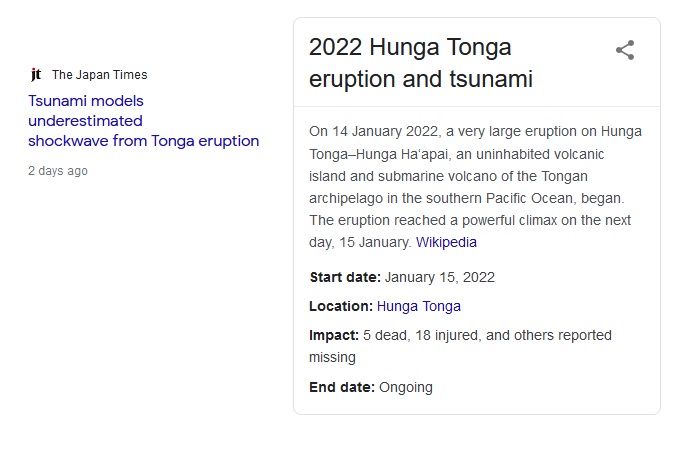 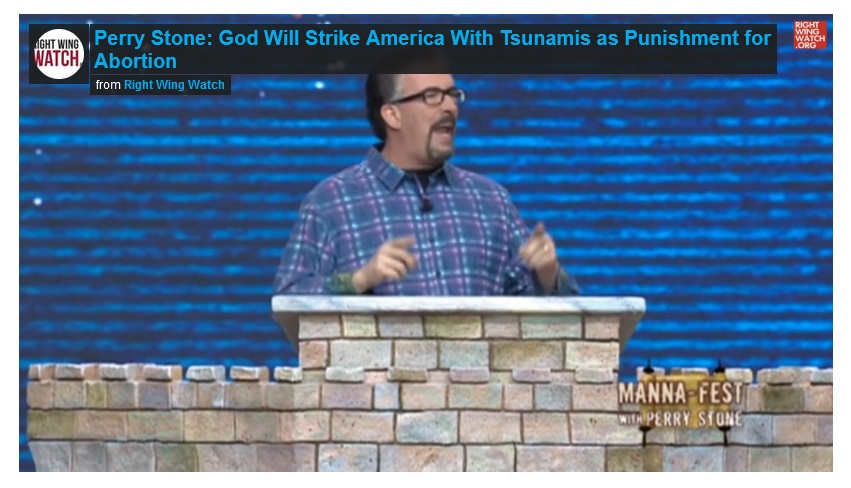 Perry Stones Warning On Right Wing Watch – ( they get the warning too!  )

A tsunami warning – Judgement From God For Abortion.

Transcription from that video:

When there is a birthing pain in a woman, there has to be a breaking of water. And once that water begins to break, that’s when you know the child is coming, and abortion has to go in and break that water and pull that child out. So here’s what I want to say to you and I want to say this. I’m standing here at OCI at this year at a prophetic summit to make a prediction I am not afraid of because one day you will go back to this DVD and some of you will go back to this television program and you will say Perry Stone said it on a Sunday morning, the last night of the prophetic Summit.

I am here to announce to you that unless there is true repentance, less the corporations in America quit supporting pro abortion meals. Unless the American people and their politicians begin to understand that life is sacred from the beginning. We will experience a judgement of water in the United States of America.

Now I’m going to be careful with this because I have been on a dear friend of mines program from Branson, Missouri. We’ve discussed this in detail and some of you may have seen that. But I believe that when we breached the water and the water breaks in order to pull a child out God’s judgment with the same judgment you judge is judged back to you. So the judgment God will use against those who shed innocent blood and legalize it will be a judgment using water.

The water will come through two methods.

It will come through extreme flooding, in which flood waters will destroy cities, towns and land but it will also come and I’m very careful saying this but will also come to tsunamis.

I have seen in the Spirit.

I was up in the air, I was down on the ground. I was at the ocean, I was on the edge of the ocean. I was up in mountains and I would see tsunamis that were so bad and it was all the United States it wasn’t a foreign country.

That one of them and I don’t even want to name the state but it’s because people will call me and should I move should I do this??

But I saw this and they it was an ocean and they were surfing and we were screaming get out of the water… GET OUT. I saw the wave coming away behind them. Nobody paid attention. They laugh they mocked and all the sudden the wave came in and the next picture just like a movie. People in mud whose hands were sticking out where they had tried to 1000s of people on a beach lying in mud.

Now ladies and gentlemen, I want you to understand it is not God that wants to do this. God is not in the business say well “I don’t like you” so I’m going to get ready. I read Ray’s merciful, are read where he’s kind.

He even won’t even destroy Sodom and Gomorrah if he can find 10 people because Abraham interceded and knew that a lot in the family was there. God wants to be merciful, but at the same time he cannot allow us to break laws that ancient nations broke and we’re judged for breaking. So therefore at some point if we don’t turn to Him, we have to experience the same thing 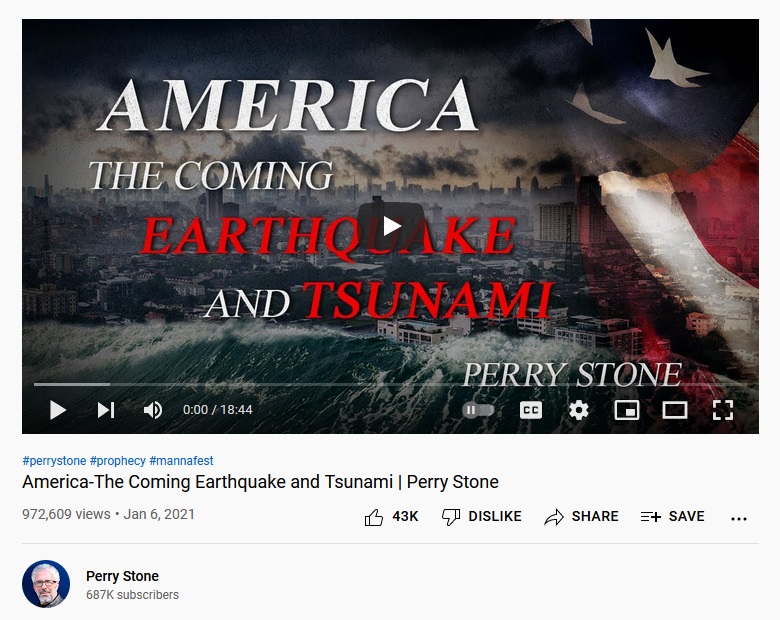 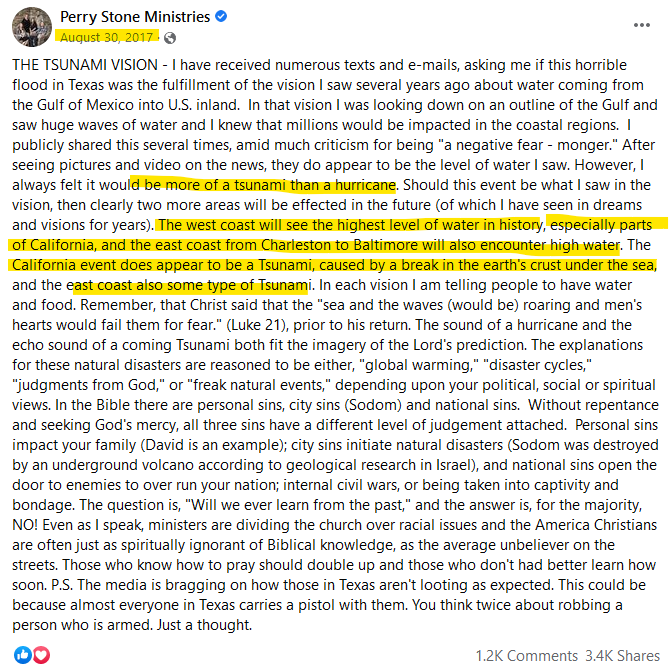 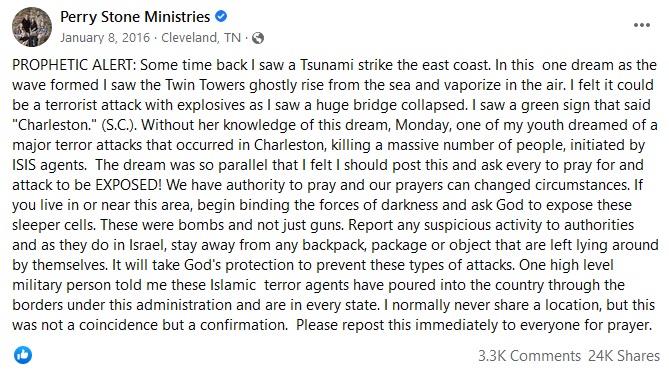 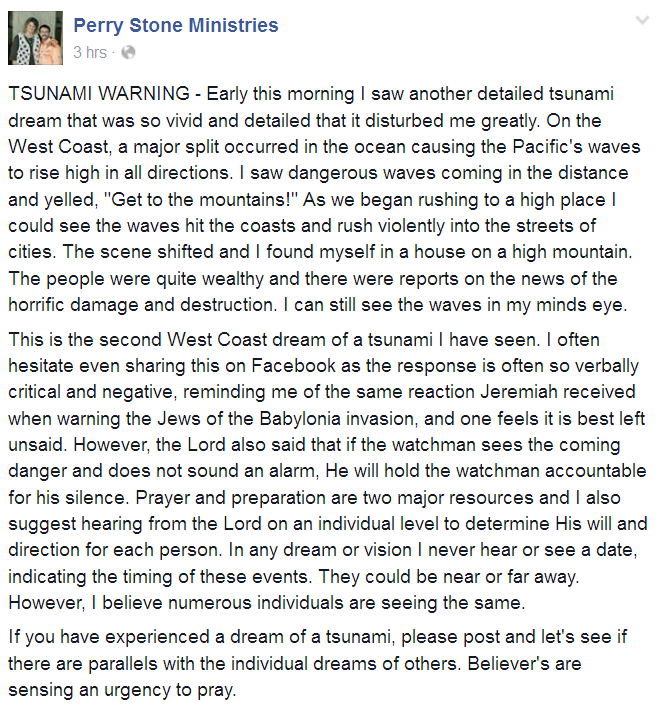 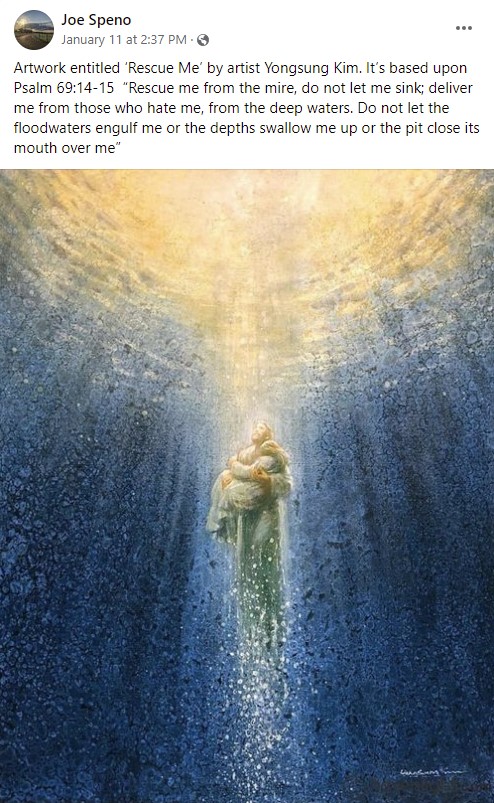 Perry Stone is best known as a Bible prophecy teacher, but what most people don’t know is that the Lord has shown him many things in dreams in visions, and many of those things have already come to pass.

In this video, Stone describes a huge tsunami which he has seen hitting the east coast of the United States.  Here is a partial excerpt from his testimony…

“I was right outside of Charleston South Carolina and in this vision I was in a duplex and there was a woman taking pictures at the bottom, I could see the city, it was a real clean, nice city, clear day and I looked over to the right and I saw a bridge in the bridge had a big interstate sign that said Charleston and I knew I’m near Charleston South Carolina it must be across the bridge, well I didn’t know there were bridges connecting there, I had no idea because I had never preached in Charleston… and all of a sudden I saw a dark cloud forming I said “oh my goodness is trouble coming and this lady is out taking pictures and I’m trying to hit the window saying get to safety, get to safety.”

To hear the rest, check out the video.

In addition, he has also been shown that an extremely large tsunami will slam into the west coast.  A couple of years ago, he posted the following on Facebook…

Early this morning I saw another detailed tsunami dream that was so vivid and detailed that it disturbed me greatly. On the West Coast, a major split occurred in the ocean causing the Pacific’s waves to rise high in all directions. I saw dangerous waves coming in the distance and yelled, “Get to the mountains!”

What Perry Stone has been shown is consistent with what the Lord is revealing to men and women of God all over the world.

These things are coming, but most Americans are refusing to listen to the warnings.