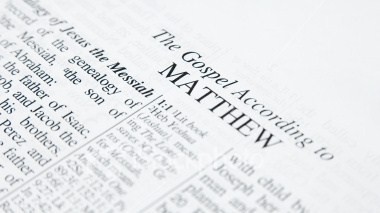 Is it possible that a Hebrew gospel of Matthew once existed? Could it actually be true that the first gospel written was composed in the Hebrew language? At one time scholars would have laughed at such an idea. But they aren’t laughing now. Some recent discoveries have stunned the scholarly world and are radically changing what people believe about the origins of the gospel of Matthew.  Traditionally, the universities of the western world have taught that the Gospel of Matthew was not the first gospel written, that it was written originally in Greek, and that it was composed after 70 A.D.  However, as new discoveries have been made, those assumptions have been shown to be stone cold wrong.

As researchers are looking into the writings of the early church leaders, they are finding that not only was the gospel of Matthew most definitely the first gospel written (almost certainly before 50 A.D.), but that it was also originally written in the Hebrew language!

Just check out some of the following quotes. The reality is that the unanimous testimony of the early church was that Matthew was the first gospel written and that it was composed in Hebrew…..

Origen (Eusebius, H.E. 6.25.4): “As having learnt by tradition concerning the four Gospels, which alone are unquestionable in the Church of God under heaven, that first was written according to Matthew, who was once a tax collector but afterwards an apostle of Jesus Christ, who published it for those who from Judaism came to believe, composed as it was in the Hebrew language.”

Papias (Eusebius, H.E. 3.39.16): “Matthew collected the oracles (ta logia) in the Hebrew language, and each interpreted them as best he could.”

Irenaeus, Adv. Haer. 3.1.1: “Matthew also issued a written Gospel among the Hebrews in their own dialect while Peter and Paul were preaching at Rome and laying the foundations of the church.”

Eusebius, H.E. 3.24.6: “Matthew had first preached to Hebrews, and when he was on the point of going to others he transmitted in writing in his native language the Gospel according to himself, and thus supplied by writing the lack of his own presence to those from whom he was sent.”

Epiphanius (ca. 315-403), bishop of Salamis, refers to a gospel used by the Ebionites (Panarion 30. 13.1-30.22.4). He says it is Matthew, called “According to the Hebrews” by them, but says it is corrupt and mutilated. He says Matthew issued his Gospel in Hebrew letters. He quotes from this Ebionite Gospel seven times. These quotations appear to come not from Matthew but from some harmonized account of the canonical Gospels.

And did you know that one of the 12 disciples of Jesus named Bartholomew actually carried a Hebrew copy of the book of Matthew into India?

Check out this astounding excerpt from an excellent article that we found:

This newly uncovered information further confirms that Matthew, an eyewitness to the miracles and events of Jesus’ ministry, was indeed the author of the first Gospel and verifies both the Jewishness and early date of the first Gospel.

Now, we have a clear mention that the Gospel of Matthew was written in Hebrew – not Greek or Aramaic, as widely thought – and was carried out of Israel by one of the original apostles to the Far East. Two of the earliest Church Fathers and historians, Eusebius and Origen, wrote that a second, long-overlooked apostle, Bartholomew, also went to India and took a Gospel text with him, according to Princeton scholar and author Samuel Moffett.

In his ground-breaking book, “A History of Christianity in Asia,” Moffett reveals that Pantaenus, a church historian and missionary who traveled to India in 180 A.D., discovered the copy of the Gospel of Matthew in Hebrew that Bartholomew had taken with him.

“It is reported,” wrote Eusebius, a fourth century bishop and church historian, “that among person there who knew Christ, (Pantaenus) found the Gospel according to St. Matthew (which had arrived ahead of Pantaenus by more than a century). For Bartholomew, one of the apostles, had preached to them, and left them (in India) the writing of Matthew in the Hebrew language which they had preserved.”

“There is a shock hidden in that matter-of-fact statement. …The surprise, of course, is the mention of Bartholomew as the pioneer to the East,” Moffett says.

Many scholars are unaware of an apostle other than Thomas ever going to India, and some even doubt that Thomas himself went.

Moffett ponders, “What was Bartholomew…doing in India with a Hebrew Gospel of Matthew?”

That truly IS a groundbreaking question.

What in the world WAS Bartholomew doing in India with a Hebrew gospel of Matthew?

This new scholarship is shattering the preconception that the entire New Testament was only written in Greek.

If any of you is aware of additional scholarship in this area, please let us know about it in the comments section below.  We love ancient mysteries and we are always eager to learn more.