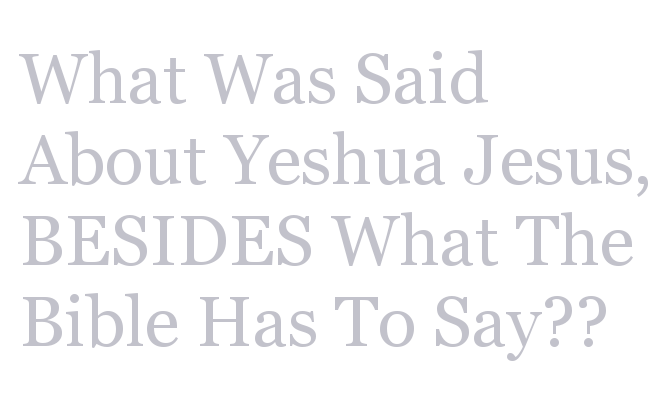 History documents that Yeshua was not a myth but a real person and the historical evidence that speaks about him is excellent. Many of these accounts are passages that indicate that Christianity was wide spread in the Roman empire within 30 years of Christ’s death. Again, these are eyewitness accounts, not historians looking back years later.

1. Cornelius Tacitus (55-120 AD), “the greatest historian” of ancient Rome For instance, the Roman historian Tacitus, writing in about 115 A.D., records the events surrounding Emperor Nero in July of A.D. 64. After the fire that destroyed much of Rome, Nero was blamed for being responsible found in (Bettenson, p. 2)

2. Flavius Josephus (37-97 AD), court historian for Emperor Vespasian:”At this time there was a wise man who was called Jesus. And his conduct was good and he was known to be virtuous. And many people from among the Jews and other nations became his disciples. Pilate condemned him to be crucified and to die. And those who had become his disciples did not abandon his discipleship. They reported that he had appeared to them three days after his crucifixion and that he was alive; accordingly, he was perhaps the messiah concerning whom the prophets have recounted wonders.” (Arabic translation)

3. Josephus, writing for the Roman government in the 70’s A.D. records some incidental things regarding Christ and the church. He confirms that John the Baptist died at the hand of Herod (this same incident is recorded in the gospels) as well as the death of, “The brother of Jesus, who was called Christ, whose name was James. . . he delivered them to be stoned” (Josephus, Antiquities of the Jews, Book XVIII, ch. V, p. 20; Book XX, ch. IX, p. 140 ).

6.Pliny the Younger, Roman governor of Bithynia in Asia Minor around 112 AD

7. Emperor Trajan, in reply to Pliny. Also, In about 112 A.D. the Roman governor of what is now northern Turkey wrote to Emperor Trajan regarding the Christians in his district: Found in (Bettenson, p. 3)

9. The Jewish Talmud, compiled between 70 and 200 AD:”On the eve of the Passover Yeshu was hanged. For forty days before the execution took place, a herald went forth and cried, ‘He is going forth to be stoned because he has practised sorcery and enticed Israel to apostacy. Anyone who can say anything in his favour, let him come forward and plead on his behalf.’ But since nothing was brought forward in his favour he was hanged on the eve of the Passover.”

14. Will Durant, himself not a Christian, wrote concerning Christ’s historical validity,(Durant, The Story of Civilization, vol. 3, p. 555). And again, “That a few simple men should in one generation have invented so powerful and appealing a personality, so lofty an ethic and so inspiring a vision of human brotherhood, would be a miracle far more incredible than any recorded in the Gospels” (Ibid., p. 557).

16. Acts of Pontius Pilate, reports sent from Pilate to Tiberius, referred to by Justin Martyr (150 AD) Historians questioned the accuracy of the accounts surrounded Pontius Pilate’s crucifixion of Jesus. Later it was discovered that Pilate had been appointed by a man named Sejanus who was plotting to overthrow Caesar. Sejanus was executed along with many of his appointees (Delashmutt, Sejanus, p. 55, 56). What this demonstrated was that Pilate was in no position to get in trouble with Rome. The Jews had him in a tight place. If word returned to Rome that Jerusalem was in rebellion, Pilate would be the first to go. The gospel account was confirmed as accurate.

17. Phlegon, born about 80 AD, as reported by Origen (185-254 AD), mentioned that Jesus made certain predictions which had been fulfilled

18. Clement, elder of Rome, letter to the Corinthian church (95 AD)

A young man appeared in Galilee preaching with humble unction, a new law in the Name of the God that had sent Him. At first I was apprehensive that His design was to stir up the people against the Romans, but my fears were soon dispelled. Jesus of Nazareth spoke rather as a friend of the Romans than of the Jews. One day I observed in the midst of a group of people a young man who was leaning against a tree, calmly addressing the multitude. I was told it was Jesus. This I could easily have suspected so great was the difference between Him and those who were listening to Him. His golden colored hair and beard gave to his appearance a celestial aspect. He appeared to be about 30 years of age. Never have I seen a sweeter or more serene countenance.

What a contrast between Him and His bearers with their black beards and tawny complexions! Unwilling to interrupt Him by my presence, I continued my walk but signified to my secretary to join the group and listen. Later, my secretary reported that never had he seen in the works of all the philosophers anything that compared to the teachings of Jesus.

He told me that Jesus was neither seditious nor rebellious, so we extended to Him our protection. He was at liberty to act, to speak, to assemble and to address the people. This unlimited freedom provoked the Jews — not the poor but the rich and powerful.Later, I wrote to Jesus requesting an interview with Him at the Praetorium. He came.

When the Nazarene made His appearance I was having my morning walk and as I faced Him my feet seemed fastened with an iron hand to the marble pavement and I trembled in every limb as a guilty culprit, though he was calm. For some time I stood admiring this extraordinary Man. There was nothing in Him that was repelling, nor in His character, yet I felt awed in His presence. I told Him that there was a magnetic simplicity about Him and His personality that elevated Him far above the philosophers and teachers of His day.

Now, Noble Sovereign, these are the facts concerning Jesus of Nazareth and I have taken the time to write you in detail concerning these matters. I say that such a man who could convert water into wine, change death into life, disease into health; calm the stormy seas, is not guilty of any criminal offense and as others have said, we must agree — truly this is the Son of God.Your most obedient servant,Pontius Pilate”

Unique Claims That Jesus Said About Himself

Among all the leaders of the major religions, including Mohammad, Buddha, Confucius, Lao-tzu, no one else made claims like Yeshua-Jesus.

12. Yeshua Existed Before Everything!

13. Yeshua claimed to be sinless

14. Yeshua claimed to have authority over Satan

15.Yeshua claimed to be born of the virgin, and claimed to be resurrected from death. These claims of Jesus separate Him from leaders of other religions.

Miracles of Jesus Jesus performed miracles, He did what people can’t do. In the bible, it says Jesus did so many miracles that it would fill up books

a) He healed people: blind, crippled, deaf, even raised a couple of people from the dead.

b) He had power over objects: on at least a couple of occasions, he created food out of thin air, enough to feed crowds of several thousand people.

c) He performed miracles over nature: walked on top of a lake, instantly stopped a raging storm for some friends.

p) Yeshua appeared to disciples after resurrection (John 20:19). People everywhere followed Jesus, because He constantly met their needs, doing the miraculous. He said if you do not want to believe what I’m telling you, you should at least believe in me based on the miracles you’re seeing.

The Morality Of Yeshua

One significant reality is that science alone can offer no law or moral standard to tell us how to live. Genocide has been perpetrated more than once in this century. Conventional, nuclear, chemical and biological weapons can annihilate entire populations. Look at the teachings of Yeshua, he was a holy man that was fair and just.