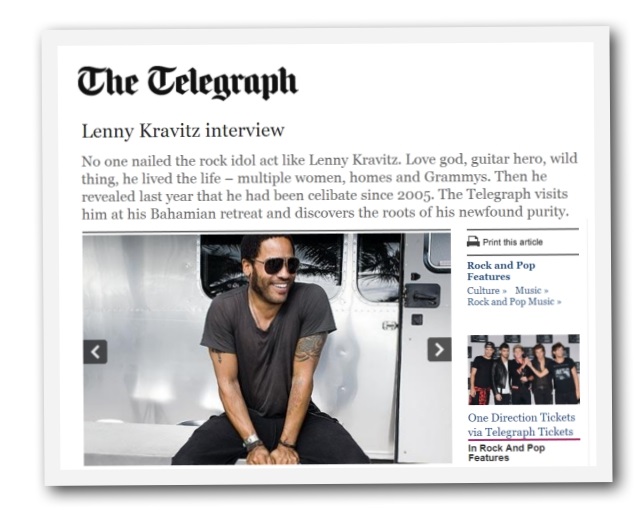 In an interview with Lenny Kravitz featured on The Telegraph, he shares how his father who was not religious, glimpsed into the reality of hell on his death bed. Lenny explains that until the last two weeks of his life, he never had any interest in faith, until when he gave his life over to Jesus. The real experience that changes his father also changed Lenny’s outlook on faith. Here is a small section of the article. Please visit The Telegraph for the entire article.

Eventually, his father had to go to hospital. That’s where it happened.

‘It sounds like…’ Kravitz begins, and then says, ‘It’s going to sound like whatever it sounds like, but this is what it was. I mean, spiritually hospitals are very intense places. It’s like death’s doorstep. And he was in his bed one night and he looked at me, and he wasn’t on drugs, and he said to me, “There are these things flying around my bed, and these things crawling on the floor.” I said, “What are you talking about?” This is from my dad. He doesn’t do with any kind of spiritual thing. No heebie-jeebie kind of thing. And he’s, “There’s black-winged things and they’re flying around my bed… the things that are crawling on the ground, they look like they’re rats and they’re not… I see them.” I didn’t quite know how to take it. And he then began having this revelation and he accepted Christ – this is a non-religious Jewish man – and somehow the spirit world opened up to him.

Almost like he had spiritually been bound his whole life and now this thing was released.

After this spiritual experience, his father started answering some of the questions Kravitz would never get answers for. When Kravitz asked him before, “Why did you do what you did? Why did you do this to Mom?”, his father would stonewall. ‘That’s just the way it is,’ he would say. But a couple of nights after the experience, sitting in hospital with Lenny and his two half-sisters, Sy started talking. ‘He apologised to us in the most sincere, heartfelt manner. “I am sorry for what I’ve done, how I’ve been, how I’ve treated you, and I love you.” Real. And it was shocking…

And what he said to me is that he always wanted to change his life, and he felt there was this thing on his back and he couldn’t get it off. His whole life, he knew inside himself that he wanted to change. But, he said, “I couldn’t.”?’

There would be one further unexpected moment: ‘As he got closer to his death, another night in the hospital, he was really tired and he looked over at me and he goes, “There’s angels all around the room. Because of Jesus.” And that was it. He turned and looked away. If you knew my dad – it was the furthest thing from him.’