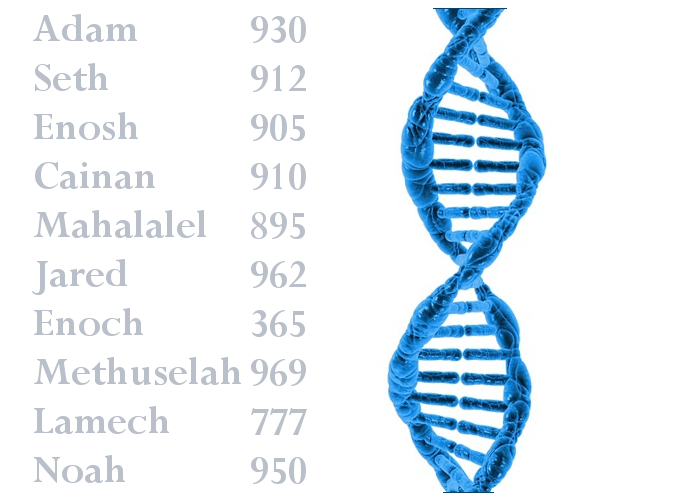 Unable to accept 900-year human life spans, skeptics view the Bible as unreliable, a book of human myth rather than divine revelation.

If there there is evidence to support that at one time we lived longer, would you want to know it?

Archaeological finds have lifted up the accounts stated in the bible to be true and accurate.  Many of these finds have come out within our generation.  More powerful evidence, sees to point to information that we can test over long periods of time.  Mutations, when tested in the labs, have proven to be contrary to what evolution claims.   Science is just on cutting edge to discover the complexities that exist within DNA.  In March of 2014, they discovered that virtual 3D faces can now be produced from DNA code.  Could it be that before the flood the DNA contained more information than we have today?

Mutations Prove That We Are Devolving, Not Evolving Which Supports The Scriptures

Thousands Of Mistakes (mutations) In Our DNA Make Us Weaker, Not Stronger– In the article “Scientists Discover Proof That Humanity Is Getting Dumber, Smaller And Weaker” From The Truth Wins site, Scientists have found that our bodies and our minds have both deteriorated significantly compared to our ancestors.  In fact, just this week a very prominent professor at Cambridge University said that “our most highly trained athletes pale in comparison to these ancestors of ours”.  The biggest reason for this, of course, is the degradation of the human genome.  Groundbreaking research by Dr. John Sanford of Cornell University and others has shown that our genes contain tens of thousands of mistakes (mutations), and with each passing generation even more errors are added and passed on.  So it should be no surprise that our ancestors were bigger, stronger, faster and smarter.  The truth is that they had better genes.  Read more about the evidence here

Long Life Spans: New Discoveries in the Biochemistry of Aging Support the Biblical Record– is an excellent article that addressed how technology has discovered that longer life can be achieved through altering DNA.

Larger DNA (Genome Size) = Longer Life “- Humans have a large genome—three billion base pairs (genetic letters). However, initial estimates from the HGP indicate that the human genome possesses only 28,000 to 120,000 genes.38 This means that noncoding DNA makes up roughly 97% of the human genome. This prompts speculation, with Genesis 5 and 6 in mind, that quite possibly the large size of the human genome—comprised of a large amount of noncoding DNA—may reflect God’s original purpose for man. God might have designed the large human genome to allow life spans of 900 years. According to this suggestion, the noncoding DNA may have performed a critical function at one time. Perhaps God left the human genome intact at the time of the Flood as He acted through astronomical events and other biochemical changes to limit man’s life expectancy. Then the human genome, as observed today, would be a carryover—and a possible testimony to—the time when God purposed for people to live longer.Alternatively, the human genome may have been even larger before the Flood. Given their relatively large body size and high level of activity, humans live considerably longer than members of other species. This combination of size and activity level may in itself explain humans’ large genome size, but the pre-Flood life spans may have required an even larger genome”-godandscience.org

Life Could Be Extended By 44% By Messing Around With The The Cell’s Antioxidant Defenses “A team of pharmacologists recently demonstrated that the aging effects caused by ROS can be largely subverted by augmenting the cell’s antioxidant defenses by using enzyme mimetics.12 Enzyme mimetics,are synthetic compounds that imitate the chemistry of enzymes and bring about the same chemical reactions.  They basically imitate natural enzymes.  The pharmacologists found that administering  enzyme mimetics to a study group of worms can extend the worms’ average life span by 44% by providing additional defense against the damage that free radicals cause. Not only does the worm study help define the role of ROS in the aging process, it also indicates that human life span could be, and in fact, may be lengthened or shortened by this “pharmacological intervention.  Researchers also have been able to extend the life span of fruit flies by about 40% through similar means. Instead of using enzyme mimetics, scientists manipulated the fruit flies’ genes, causing their mitochondria to produce more SOD and catalase. The results were similar.Seen at godandscience.org/

“The machinery by which cells divide is controlled by the instructions written on the DNA, the genetic code. So it looks as if some pre-programmed genetic limit, while not all there is to aging, could well be a big part of the story. In short, there is no known biological reason why lifespans of 900 years or more would be impossible if that genetic limit were set at a different point.”

“It is known that ordinary human cells will only divide some 80–90 times, then no more.It appears that there is, on the tips of each of our chromosomes, a structure called a telomere. Think of it as a counting device, with a number of beads on the end. Every time the cell divides, it is as if a bead is snipped off, shortening the telomere.  Once all of the beads have gone, cell division can no longer take place. From then on, as each cell ‘runs down’, it is not replaced by any new ones. So even if you avoid any sort of fatal accident or disease, you will eventually succumb to failure of one or more organs”  The real question then becomes not, ‘How could they possibly live for so long?’, but rather, ‘Why don’t we live that long any more?’

Genes Might Be The Reason For Old Age “Two French researchers have recently traced Calment’s genealogy back five generations on both sides. Each of her ancestors had lived a remarkable 10.5 years longer, on average, than the mean age at death of people in the same region. They concluded that how she lived or what she ate was not the main factor in her great age, but that a rare constellation of longevity genes must have come together in one individual. Obviously, she also happened to avoid any misfortune which might have caused earlier death.”  Living for 900 years

Is there extra-Biblical evidence to support the long lifespans of pre-flood peoples? Info From Christian Think Tank

“Extra-biblical evidence to support the long life spans of the people in Genesis is found in the Sumerian King List. This list mentions a flood and gives the length of the reigns of kings before and after a flood. There are many striking parallels between the Sumerian King List and Genesis, such as a flood event, numerical parallels between the pre-Flood biblical patriarchs and the antediluvial kings, and a substantial decrease in life span of people following the flood.2 One author on this subject concludes, “It is highly unlikely that the biblical account was derived from the Sumerian in view of the differences of the two accounts, and the obvious superiority of the Genesis record both in numerical precision, realism, completion, and moral and spiritual qualities.”2 It is more likely that the Sumerian King List was composed using Genesis for numerical information. Obviously, the Book of Genesis would only be used if the person writing the list believed it to be a true historical account containing accurate information.”  Answers In Genesis

Pre-Flood Rulers Reigned For Several Thousand Years ” Stories from the ancient Akkadian and Sumerian cultures declare that their most ancient kings lived thousands of years each. The “Weld-Blundell Prism,” for example, written about 2170 B. C., speaks of eight pre-flood rulers each reigning for several thousand years. ”

Mesopotamian Records A 12 Month, 30 Day Calendar -“References to agriculture indicate that the ancients counted years similarly to the way we do. Some early Mesopotamian records (circa 1500 B. C.) indicate a calendar of twelve months, each month 30 days long. We have no record of any ancient society counting a shorter year. Further, it is clear that the Mesopotamians were aware that their twelve 30-day months fell short of a year by a little more than five days.”

Dr Hugh Ross believes that canopy theories may not be the best explanation to explain the long lifespans.  Rather a supernova that  occurred sometime between 9300 and 6400 B. C, which may fit well with the Biblical date for the Genesis Flood…

“Dr. Brakenridge also points out that this supernova occurred about three times closer to Earth than any other supernova event in human history. Thus, it is probably responsible for most of the cosmic rays that now come our way, cosmic rays which break down protein. Further, the Vela supernova would have affected the upper atmosphere in such a way as to bring about a global cooling and would have damaged the ozone layer so as to increase ultraviolet by two to ten times. Dr. Brakenridge documents geological evidence for both effects in the era between 8,000 and 9,000 B. C., also the time of the disappearance of some diatom and plankton species. The Vela supernova may have been the means God used to shorten man’s life span from 900 years down to less than 120 years. I wish it were possible to be more definite, but there are reasons why I cannot be. First, no experiment has been performed on sustaining advanced life in a low-radiation environment. Such an experiment would be difficult, to say the least. If we were to go deep enough underground to avoid the effects of cosmic rays, we would then begin to experience the far more damaging effects of increased radioactivity from exposure to radioactive elements in the earth’s crust. Another important experiment would be to expose advanced life to the equivalent of a nearby supernova event and to observe the consequences over several generations. However, this experiment would be even more difficult to perform. “ 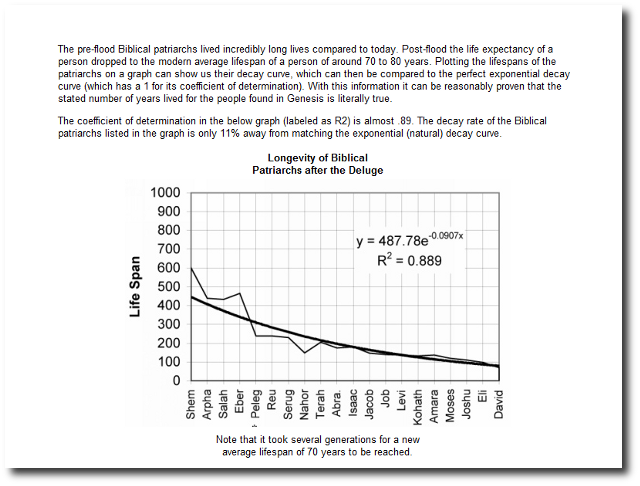 Archaeology has revealed non-biblical texts that echo Genesis 5. For instance, The Weld-Blundell Prism (circa 3000 B.C), is just one of several artifacts that bears striking parallels to the biblical account.  Taken from hcchristian.wordpress.com 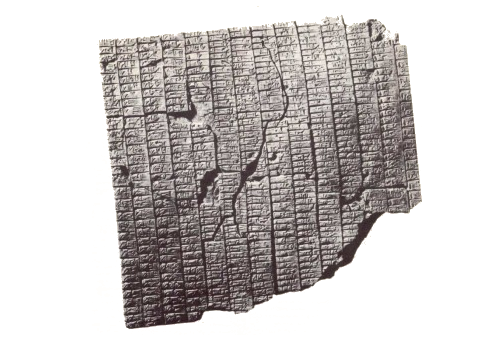 The discovery of the Ebla archive in northern Syria in the 1970′s has confirmed that the Biblical writings concerning the Patriarchs are viable.

During the excavations of the palace in 1975, the excavators found a large library (in a royal archive room), filled with tablets dating from 2400 -2300 BC. Nearly 15,000 tablets and fragments were found. These tablets detail the personal and location titles in the Patriarchal accounts in the bible.