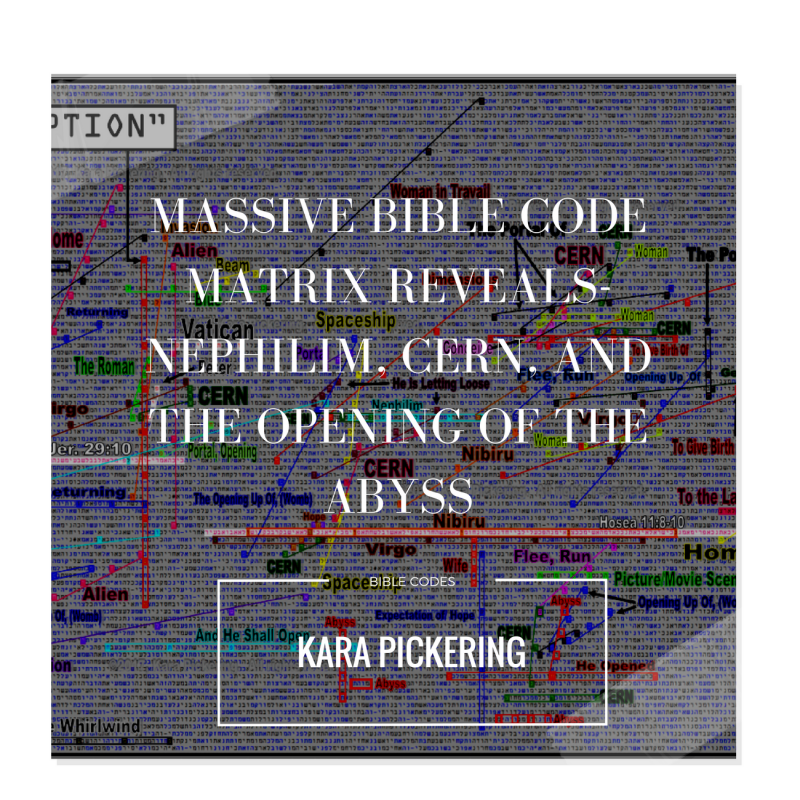 Sounds like a fantastical Science Fiction Movie, inspired by the writings of Tom Horn and Cris Putnam. But…. What if it’s true? Could the world really witness a series of events…such as these?

For almost 2000 years 2 Thessalonians 2:11 has ignited the imagination of its readers.  It tells of a God-sent “strong delusion” that will cause people to believe a lie and be forever damned.  Are we about to see prophecy become history before our very eyes?  Do Bible codes tell us what to expect, or do they confirm events that have prophetic significance? The answers to these questions are sobering.

Let us review the Biblical passage that inspires the coding terms for the Operation: Deception matrix.

1Now we beseech you, brethren, by the coming of our Lord Jesus Christ, and by our gathering together unto him, 2That ye be not soon shaken in mind, or be troubled, neither by spirit, nor by word, nor by letter as from us, as that the day of Christ is at hand. 3Let no man deceive you by any means: for that day shall not come, except there come a falling away first, and that man of sin be revealed, the son of perdition; 4Who opposeth and exalteth himself above all that is called God, or that is worshipped; so that he as God sitteth in the temple of God, shewing himself that he is God. 5Remember ye not, that, when I was yet with you, I told you these things? 6And now ye know what withholdeth that he might be revealed in his time. 7For the mystery of iniquity doth already work: only he who now letteth will let, until he be taken out of the way. 8And then shall that Wicked be revealed, whom the Lord shall consume with the spirit of his mouth, and shall destroy with the brightness of his coming: 9Even him, whose coming is after the working of Satan with all power and signs and lying wonders, 10And with all deceivableness of unrighteousness in them that perish; because they received not the love of the truth, that they might be saved. 11And for this cause God shall send them strong delusion, that they should believe a lie: 12That they all might be damned who believed not the truth, but had pleasure in unrighteousness.

To begin our study, we will use the Interlinear Scripture Analyzer (ISA) program to discover the original Greek words for our key text. Below is a screenshot of 2 Thessalonians 2:11 that shows the original Greek words that were used for our modern English translation of the term “strongdelusion.” The Greek states “energeian”(meaning “operation”; Strong’s #G1753), and “planEs” (meaning “of-deception”; Strong’s #G4106).

The scripture clearly states an operation of deception will be sent by “theos” (Strong’s #G2316).  Theos translates as either “God” (capital “G”meaning YHWH) or “god” (lower case “g” meaning pagan deity or principality).

In my opinion, operation deception  conjures up images of a military campaign. What is the significance of that?  Could a deceptive campaign confuse and deceive the world?  After all, it happened before on a smaller scale under Hitler.  Is there now a deceptive operation manifesting around us, a mystery of iniquity, a campaign so persuasive, so real, that is will deceive the whole world? The search pressed on.

The main axis term, operation deception, is found only once in the entire Tanakh (the Old Testament of the Bible).  Operation deception is identified in vertical axis red letters in the table below.

The Formation of the Matrix

The prophet Daniel was advised to “close up and seal the words of the scroll until the time of the end.”  Think of the Tanakh as a scroll that is wrapped around a cylinder.  Within that cylinder can be found code words that run in multiple angles or planes.  Adjusting the tightness, or width, of the scroll on the cylinder unlocks the terms encoded by YHWH.  Modern computer technology using equidistant letter sequencing (ELS) can now unseal the scrolls.  An axis term is required to adjust the width of the scroll.  Entering the axis term unlocks one section of the scroll; this section of the scroll is called a matrix.

I entered a search term, operation deception, and was astonished to see it was the axis term for a unique matrix.