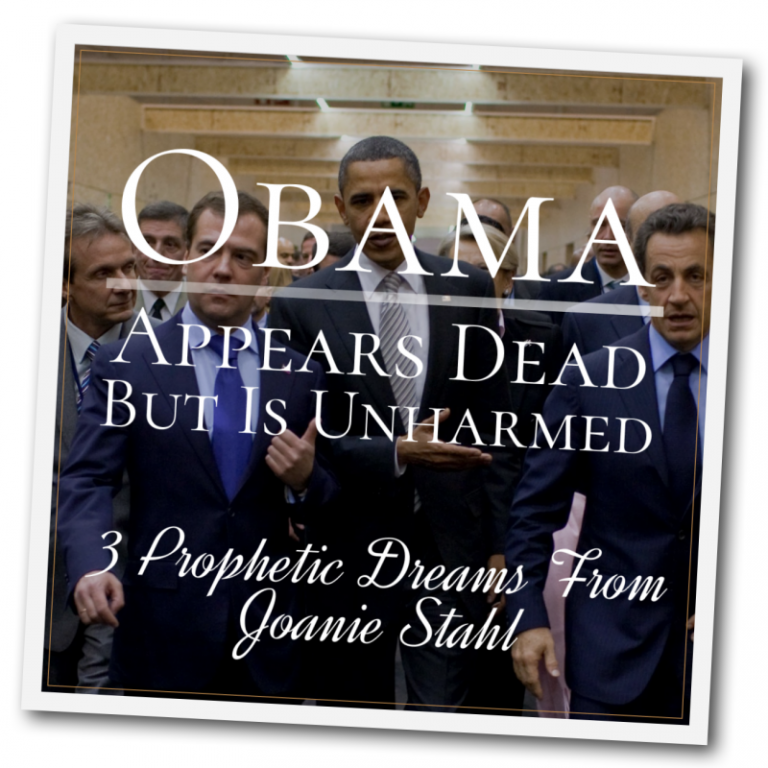 Obama Appears Dead But Is Unharmed

In a dream I saw myself standing with a group of people. Standing in front of us was President Obama.

He was dressed in casual clothing, not in a suit as he usually is. He was making a speech to us regarding his last days in office.

He was saying he had done his best and saying goodbye to us as a nation. He was speaking many things about how much he had tried and how he thought he had done great things. It was a short speech because instantly a man came out of nowhere and walked up to him and grabbed him by the arm and whispered something into his ear.

Though I was in the back of the audience, I could hear what the man was saying to Obama. In an urgent way he was telling him he needed to get him out of there. It was so urgent he didn’t even give Obama time to finish his speech. The man pulled him away and in a moment Obama vanished.

Then I noticed all the people in the audience had also left. I was alone, still standing where all the people were. It happened so fast I looked around me wondering what happened, but I could not find Obama. He was gone.

As I was turning about to see where he was and what happened so suddenly to all the people, out of nowhere, I saw a casket set up several feet from me with half of the lid open. I wondered about the casket and who was in it and why it was there, so I approached it and looked in.

I saw Obama in the casket. Then I looked even closer and saw he had an evil smile on his face. Then I noticed something else very strange, I knew that though he was laying in the casket as a dead man, he in essence was still really alive.

Immediately after that, his head turned into a roaring fire, but he did not burn up. I was horrified as I beheld it because the fire had engulfed his head, but nothing was happening to him. As the fire raged, he opened up his eyes and began to laugh with a laughter that shook me to my core because it was not the laugh of a natural man. I knew he was laughing because he had gotten away with many evil things, like he was getting the last laugh.

In terror, I jumped back from the casket and got away.  Then I awoke.

Obama Will Be Caught Red Handed

I was in devotions one morning about a year ago at the beginning of 2015. I strongly heard the voice of the Lord say to me, “Right before Obama leaves the office, he will be caught red handed by the entire world. He will be exposed to the entire world.”

Then immediately in a waking vision I saw Obama like a thief in the dark. It was like seeing someone in our home sneaking around. Instantly, a glaring bright light shone upon him. He had a look on his face of a thief being caught in the act, a look of shock, surprise, shame and embarrassment. His body language was the opposite of what we always see from him. Instead of confidence, he was cowering in fear and shame. He had nowhere to hide and he knew it.

Obama Seated High Above the Earth with Master Control

In a dream I was walking along a street. A man came to me and asked me to come with him. He said he wanted to show me something.

As soon as I agreed, I noticed a ladder from the earth that stretched up into the sky. The man showed me the ladder and I knew he wanted us to go up to the top. I knew there was something up there he wanted to show me.

Instantly, we were at the top of the ladder. Where the ladder ended, I saw myself and the man step off the ladder where it ended and we entered into a big room that looked like a command center. I saw individuals sitting before screens and control panels.

As the man showed me around the room, these individuals turned to look at us with angry looks on their faces. They wondered how we got there, but they also knew there was nothing they could do about it. As we passed by them, the man I was with opened up a door and asked me to step in. I went into a little room and I saw Obama sitting in a seat. In front of his seat was an enormous window that wrapped around him and he was looking out.

He paid no attention to us like he did not even know we were there. Then all of a sudden, the man and I were outside of this control tower looking in the window at Obama. The only way I could describe it is that he had master control. The room he was in was a seat of spiritual force and power.

Obama was dark and evil looking. I wish there was a way that I could describe the look of evil on his face, but I can’t. There are no words.

I knew that seat had been given to him. I also knew there was no way I could have known that if I had not been taken there.