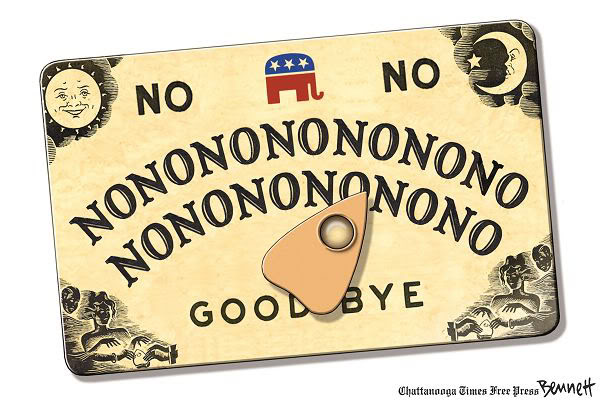 Political Cartoon- Ouija Board by Clay Bennett
One thing is true,Satan does not change his ways, or invent new ways to lure people into his lies and deception.  Precursors to the Ouija date back to ancient times. In China before the birth of Confucius (c. 551 B.C.), similar instruments were used to communicate with the dead. In Greece during the time of Pythagoras (c. 540 B.C.) divination was done with a table that moved on wheels to point to signs, which were interpreted as revelations from the “unseen world.” The rolling table was used through the nineteenth century.

Over the years  you can see Satan does not change his weapons.   Some Native Americans used “squdilatc boards” to find missing objects and persons, and obtain spiritual information. In 1853 the planchette came into use in Europe. It consisted of a triangular or heart-shaped platform on three legs, one of which was a pencil. The medium or user moved the device over paper to draw pictures and spell out messages

There are thousands of accounts of people who try the board,

where at first, it is fun, and many (lying and false) promises are made of a bright and rich future is in store. Over time, the person experiences many terrifying experiences where they are lead further into satanic occult activities, or they are unable to get rid of the demonic infestation that comes from this open doorway.

How to Get Free:

If you have dabbled into any occult activity, you first need to get saved. If you are not a saved Christian, you have no weapons to fight of demons.

If you look though our website, you will find incredible evidence for Jesus, from historical accounts, prophecy, miracles, archaeology, and much more.

The most intersting and powerful evidence is that ASKING Jesus to come into your life can free you from the demonic oppression.

If anything, thousands of accounts testify that even the most demonic possessed people HAVE been delivered in Jesus’s name.

“For God so loved the world, that he gave his only begotten Son, that whosoever believeth in him should not perish, but have everlasting life.”

Pray this prayer, and mean it with all your heart.

Lord Jesus, I know that I am a sinner, and unless you save me I am lost forever. I thank you for dying for me at Calvary. I come to you now, Lord the best way I know how, and ask you to save me. I now receive you as my Savior. In Jesus Christ Name, Amen.

Now that you have invited Jesus into your life, you need to go around your home, and find those open doorways that Satan uses to get into your home.

You can deliver these items to your minister to get rid of, or burn these objects so they do not get picked up by someone else, only to be found in another home, with a whole set of new problems.  Don’t put it off, do it now.

One close friend had told us that when she threw out her Ouija board in the trash outside, it found its way back to her bed.  Another friend had mentioned that when her and her friend were cautioned about the Ouija board, that they burned it, and the most foul smell came from the fire, and the fire was green and orange.

3.  Get those Bonds BROKEN NOW.

You need to RENOUNCE YOUR OLD ways.  In my next series of posts, I am going to document that Christains have problems if they DO not Do this.  It is very simple but imperitive.

You don’t need to say these exact words, as God looks at your heart and honors what you intend.

“In the name of the Lord Jesus, I now repent of my invovement in the use of (witchcraft, using tarot cards…) and ask you Abba Father, to forgive me.  I repent of the sinof (tell the Lord what you did) I only want to follow you.  Please forgive me for all the ways I have gone astray in, knowingly and unknowingly that I have forgotton.  I only want to serve and honor you, Lord.- In Jesus Name.  (Amen-Let it be)  I speak now in the authority of the name of the Lord Jesus Christ to all the strongmenand principalities over the occult activities I was involved in AND DECLARE that you have no power over me ANYMORE, FOR I am BOUGHT and Paid for BY THE BLOOD OF JESUS Shed on Calvary.  In the Name of the Lord of Jesus Christ, I bind up the powers of darkness and command them to leave my home, and command you to go where the Lord Jesus tells you to go.  Lord Jesus, please put a hedge of protection around my home.  I love you Jesus.  (Let it be)

4. Get Christians Around you.  Read Your Bible, and Pray

Meet up.com is a great place to meet fellow Christians in your area.  As well as facebook and so forth, but the one place is a local church.  Get involved and make connections with some good new friends.  You need Christians around you.  Satan is going to try to keep you alone, or cut off from Christian connects, so be aware of that.  Satan certainly does not want any christain influences, he wants to isolate you, choking you so eventually you will fall away from God.  Get great new exciting friends / connections around you.

Second – Be aware of attacks.

Guaranteed that as soon as you become a Christian, Satan will try to tempt you back into your old ways.

So, you feel uneasy.  What is effective?-   1- You can ask Jesus to get rid of any demons around you, in Jesus’s name, and to send his angels to provide a hedge of protection.  2- Speak out any scripture, and they will flee immediatly, or 3, Play Praise music that gives Glory to God, and they flee.  When I was single I played the bible on DVD out loud as I slept, and asked God to protect me in Jesus’s name, and it worked every time.

Again, You are going to get tempted in your old ways at least 5 times.  For example- If you are addicted to lust, chances are, that week you will have the most beautiful men/or women come across your path.  What you need to do, is turn away from it immeditatly. Don’t put yourself in tempting situations.  Get rid of your occult friends….  don’t hang out with that pretty 20 something woman ect….  You will be tempted over and over, (5 or so times), and as soon as demons see that it is useless to keep trying they will move on.  Do this with every attack.

“In Acts 2:42, the means of grace are listed, “they continued steadfastly in the apostles’ doctrine and fellowship, and in breaking of bread, and in prayers”  Here are the four elements which form the spiritual bricks for building up the Christian life are names:  the Word of God, The Fellowship of believers, The Holy Communion, and Private and Corporate Prayer”

Taken from – Occult ABC:A comprehensive examination of 71 forms of occult activity, their effect, and deliverance from them.  Kurt E. Koch

Check out these powerful videos on the Occult and the Deceptions that often people do not know of when they dabble with it.

Let me tell you, the powers of the darkness are real, but Jesus is is incharge. JOHN 16:33 Just the fact that the evidence that once you are saved, you can get rid of evil with calling out the name of Jesus is a testimony of who is in charge!