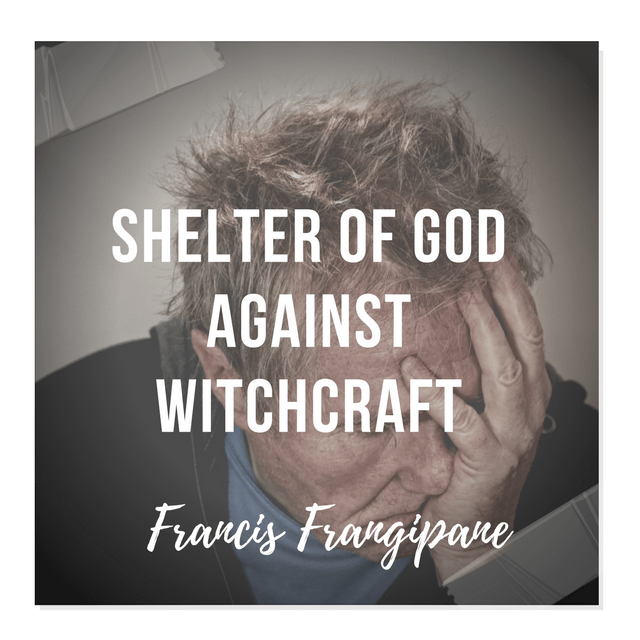 THE SHELTER OF GOD AGAINST WITCHCRAFT Part 1- Excerpt from book: The Divine Antidote by Francis Frangipane ( plus inserted comments by Priscilla)

1. An assault of witchcraft leaves the Christian disoriented or confused; he may even become clumsy. The soul under attack cannot connect with his spiritual vision; his motivation is either gone or lacking. Satan wants to cloud your vision and, thus steal your destiny in God. This happens whether it is the wiccan, satanic, type of witchcraft, or jezebel influence in the form of control and domination, or what is called “charismatic witchcraft”

2. When one is targeted by curses, he will feel emotionally drained or debilitated and often physically sick. Those who have been the object of spiritual curses will carry a darkness a cloud in their countenance. The back of their neck is tight and often painful; a band of oppression around their head (mind-control) manifests as a headache. The person might assume he is sick, but it is NOT the flu. It is witchcraft. (with it’s accompanying spirits of infirmity, death and destruction)

Note: I get words of knowledge in my body for demons manifesting on myself or in others. Jezebel…always comes with attack on the back of the neck and head…Witchcraft, death and destruction…neck pain,( gripping) with pressure on the top of your head which makes it feel like it will explode. Strife…pain in left hip suddenly. Example: Once while attending a conference, I went to a workshop on the cults…Mormonism, Jehovah’s witnesses…etc. As we were standing for prayer…I suddenly FELT pressure on the back of my neck…and as I looked left…saw a woman with black hair looking at me…but weirdly not in my eyes…but as if staring at something over my head…and I heard the Spirit of God say “witch”. I tried to pray in tongues…to no avail…I should have stopped the speaker or other people I knew…but didn’t want to disrupt the talk. Later I had to have chiropractic adjustment to correct my neck bones were actually out of place. And in another session praying for a teen (years later). He saw 3 spirits trying to put ropes around my neck in a vision…but I was and had been in prayer and worship, and he said he saw the ropes melt from the glory on me.

{Worship is powerful weaponry against witchcraft}

3. Often curses released from witchcraft will arouse a number of inordinate fears which will plague the mind. The theater of the individual’s imagination will be targeted especially in dreams. At center stage, grotesque images will flash across the mind. The person will be further wearied by lack of deep, restful sleep.

4. When curses are aimed at a congregation, inter-church relationships will experience constant problems, distracting the body of Christ from its primary focus and calling. Irritation levels will be high ; patience will be low. People will be more likely to complain about one another. Gossip and backbiting will increase. (And suspicion I might add) Rebellion against church leaders will seem justified, and the temptation to withdraw from fellowship will be strong. It is vital to note that any or all of these symptoms can occur without the attack of witchcraft. However, once we ascertain that we are truly fighting a spiritual enemy victory is near.

To win this battle, we must understand that the Lord allows evil to facilitate Christ likeness within us. In other words, we would never ascend to the heights of Christ like love, which loves even one’s adversaries, without there being actual enemies to perfect our love. The reason for our existence in an evil world is to produce a righteousness within us that not only withstands the assault of evil, but grows stronger and brighter in the midst of it.

Therefore, to deal with witchcraft, we must understand that the Lord’s primary objective is not the removal of wickedness from society, but the transformation of our hearts to Christ likeness. as we become like Jesus – that is, loving our enemies, blessing those who curse us – Christ Himself literally and tangibly manifests Himself in our spirits. It is the transformed soul which dwells in the Place of Immunity.

{ The bible teaches us that Christ came to destroy the works of the evil one….but we war not against flesh and blood, but powers, and principalities and spiritual wickedness in high places, NOT the persons we deal with so much….although they can be converted….Christ gives us discernment to know which are called elect, and which will refuse His love. The greatest defense in our lives is the PRESENCE of God. Just a little bit of light drives out the darkness so, it is not just rebuking demons that drives them away….but the manifest presence of the Most Holy Spirit in our lives….manifesting Himself in holiness and obedience to God. The more we enter His presence….to stay there and just minister to HIM….He pours out His love in US so we can be more like HIM. Just like sunshine…opens up some flowers….His Son shining on us…manifesting His love towards us when we worship Him, and pray and talk with Him, and meditate on His word…will heal us…make us to blossom and grow……Once…I had a little daisy one of the children gave me…and I put it in water….and it lasted a long time and I thought….wow…it really is lasting and staying beautiful a long time…and the Lord spoke to me. He said….As long as we ABIDE in Him….walking according to the Spirit….(depending on Him) and obeying what He tells us to do….and maintaining fellowship with the Holy Spirit (represented by water in the bible often), then we too will stay beautiful and be a sweet aroma to our Savior )