With only hours before Donald Trumps presidential inauguration, we have the streets of DC filling up with all sorts of people waiting to capture a glimpse of the new president sworn in.  While hope fills the air for those people in DC,  we have hundreds of thousands of people ready to disrupt the ceremonies because they despise Donald Trump so much. In fact, in one video, some groups were discussing using acid to show their hatred towards Trump.

We shouldn’t underestimate the level of violence that could very well take place in DC tomorrow.  Today CNN ran a segment on just who would be in the chain of command if Donald Trump was taken out by an assassin. Why is the mainstream media drawing attention to such a sinister event?   Alex Jones, also in DC speculates that these reports could very well be suggestive conditioning by the elite for the public to accept an event, if it were to take place.

I have held on to a video that Jonathan Wright ( The Code Searcher )  produced back in June of 2016.  The video was entitled ” Bible Code : Trump Wins, Hillary Steals”

In this video Jonathan reveals a matrix of codes that suggest that an assassination attempt is made on Donald Trump’s life.

Here is what Jonathan says:

0:36  In this video he starts off by discussing the biggest blunder Michael Drosnin made with a bible code prediction that Al Gore would win the presidency. Time told that Al Gore did not win, and because of this very public warning, the bible code legitimacy was greatly diminished.  People didn’t trust the bible codes after those remarks didn’t come to pass.

Rewind a year before, Drosnin was famous for showing the world the assassination codes associated with Yitzhak Rabin.  These codes were proven accurate, and when he came out with the Al Gore codes, everyone expected it to happen because of his previous findings.

Jonathan says not everything was found on the code chart that was associated with Gore.  Its like reading only half of a sentence.   Part of the code was not found at that time Drosnin promoted it.  It proved the codes were right regarding Gore.

5:38  Jonathan reminds us that the bible codes are not meant to be used as a crystal ball, but rather to validate that God is accurate.

7:19 There is a bible code searcher who has put together a chart suggesting Hillary would win.  Jonathan says that the codes have to be searched out thoroughly, because often times we are missing an element, such as what was mentioned above.

7:32 “D Trump” was found with the word “murder” intersecting the word Trump.

Jonathan asks the question :“does that mean that it is going to happen? ”   The methodology of the Rabbi’s say the proximity with the smallest skip (this code even shares a letter) that there would be a high probability of this taking place.

7:56 “is murdered”  is found above in the table, and in the lower left hand quadrant.

8:38 – He discusses the word “president” found beside both Hillary and Trump

9:24 Jonathan finds a word I cannot quite make out.  “Nazi”?  He discusses that Hillary could steal the election?  “Stolen” is found in the chart.

11:34 Donald Trumps name runs through an interesting set of conditional scriptures.  Here is what Jonathan found:

A New Heart and Spirit

…25“Then I will sprinkle clean water on you, and you will be clean; I will cleanse you from all your filthiness and from all your idols. 26“Moreover, I will give you a new heart and put a new spirit within you; and I will remove the heart of stone from your flesh and give you a heart of flesh. 27“I will put My Spirit within you and cause you to walk in My statutes, and you will be careful to observe My ordinances.…

1When I would heal Israel, The iniquity of Ephraim is uncovered, And the evil deeds of Samaria, For they deal falsely; The thief enters in, Bandits raid outside, 2And they do not consider in their hearts That I remember all their wickedness. Now their deeds are all around them; They are before My face. 3With their wickedness they make the king glad, And the princes with their lies. 4They are all adulterers, Like an oven heated by the baker Who ceases to stir up the fire From the kneading of the dough until it is leavened. 5On the day of our king, the princes became sick with the heat of wine; He stretched out his hand with scoffers, 6For their hearts are like an oven As they approach their plotting; Their anger smolders all night, In the morning it burns like a flaming fire.…

The Desolation of Egypt

…14“I will turn the fortunes of Egypt and make them return to the land of Pathros, to the land of their origin, and there they will be a lowly kingdom. 15“It will be the lowest of the kingdoms, and it will never again lift itself up above the nations. And I will make them so small that they will not rule over the nations. 16“And it will never again be the confidence of the house of Israel, bringing to mind the iniquity of their having turned to Egypt. Then they will know that I am the Lord GOD.”‘”…

…7Each man said to his mate, “Come, let us cast lots so we may learn on whose account this calamity has struck us.” So they cast lots and the lot fell on Jonah. 8Then they said to him, “Tell us, now! On whose account has this calamity struck us? What is your occupation? And where do you come from? What is your country? From what people are you?” 9He said to them, “I am a Hebrew, and I fear the LORD God of heaven who made the sea and the dry land.”…

With all the chatter in the news, this video caught my attention.  Here we have multiple codes that suggest that Donald Trump may be in great danger.  Being that the codes were correct that he won the presidency, this certainly has my attention.  The word United States was found in the Code, along with Hillary Clinton.  What are the odds?

In this video some absolutely incredible codes were found.  Over 3200 years ago in the bible show details about the people and events which are happening in our day.

Published on Dec 19, 2016,  Bible codes revealed more then a year ago that Trump would win the election. SHOCKING NEW WARNING. Is ASSASSINATION POSSIBLE?

Notes From The Video

“Day of distress” is found, “assassin” is found, along with “assassinate” is also within this table.

“Is Murdered” is vertically within this table

Please support Jonathan Wright (Find his website here- The Code Searcher ).  He is going through a very difficult battle getting his sons back into his life.  He is looking for support getting Christian representation as well as the money to go ahead and pay for those attorneys.  Listen to his video here

Published on Jan 19, 2017- CNN has been criticized for airing a report which revealed that an Obama appointee would become president if Donald Trump …………….

Published on Jan 18, 2017- While security is in place and there is no specific, credible threat, a quirk in America’s rules for succession raises questions about who would be in charge if an attack hit the incoming president, vice president and congressional leaders just as the transfer of power gets underway. CNN’s Brian Todd

Will There Be War On The Streets Of Washington D.C. During The Inauguration On Friday?

The stage is set for a potentially very ugly confrontation between radical leftist protesters on one side and law enforcement authorities and Trump supporters on the other side. It is being estimated that hundreds of thousands of supporters will be arriving in D.C. to celebrate the inauguration of Donald Trump, but it is also being estimated that hundreds of thousands of people will be coming to D.C. to specifically protest the inauguration of Trump. These protesters plan to set up blockades, disrupt inaugural balls and generally cause as much chaos as they possibly can. In fact, a spokesperson for #DisruptJ20 says that the goal of his organization is for Trump to be inaugurated “amid complete chaos”…

Donald Trump may have a point about paid protesters: Job ads running in more than 20 cities offer $2,500 per month for agitators to demonstrate at this week’s presidential inauguration events.

“There’s a sense of urgency that’s different,” said Lacy MacAuley, an organizer with DisruptJ20, an all-volunteer crew coordinating many of the anti-Trump protests.

In a sign of many Americans’ anger and frustration with the political system, DisruptJ20 organizers have been planning to protest at the inauguration since May.

Other demonstrators plan to block 12 public entrances to the event Friday. Some will link arms, some will dance, and some plan yet-to-be-revealed actions that will probably lead to them being arrested, organizers said. DisruptJ20 plans call for actions by Black Lives Matter, climate change activists, labor, feminists and LGBTQ groups.

Longtime San Franciscan and Code Pink co-founder Medea Benjamin, who estimates that she has been arrested 150 times in protests over the decades, said Wednesday that “never in my lifetime have I seen anything like this.” 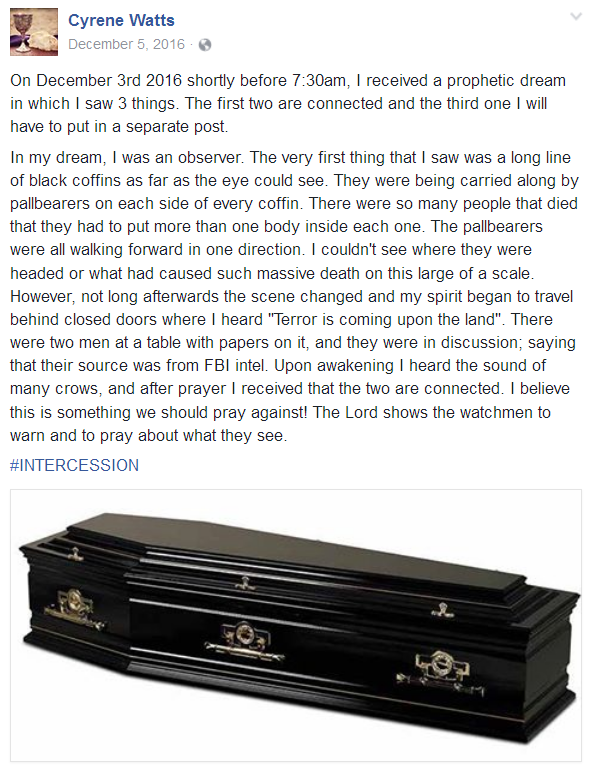 TD Hale sees a death of an important person

Pastor Hale discusses a prophetic dream where The Lord showed him a ‘General’ of either the country or faith, laying in a casket in a huge auditorium draped in the U.S. Flag on a stand, then from the side entrance the Presidential limousine (aka: the Beast) drives up and flips on its side. Pastor’s dream is reminiscent of Justice Antonin Scalia. Pastor Begley confirms that the stand (riser) that Justice Scalia was laid to rest on had not been used since Abraham Lincoln’s assassination.   TD Hale was correct about Trump being elected president in advance.

“Back in March, Pastor TD Hale appeared on a broadcast of Trunews.com, where he shared a prophetic word which he received on February 1 2016 where he said that Trump would win the presidency”  See that post here

A CALL TO PRAYER

We’ve been receiving some EXTREMELY troubling news about what the enemy is planning for Friday’s Inauguration Day. Thousands are streaming into the DC area. But all the turmoil, upheval and satanic rituals planned don’t even begin to include WHO ELSE is just waiting to slip past the lines…YOU CAN BET the witches and satanists are fasting and praying RIGHT NOW to their dark g-ds and yes, that includes sacrifices. And remember, the wickedness planned extends far beyond DC…the entire country should be on their knees crying out in prayer!
THIS IS A HIGH PRIORITY CALL TO PRAYER!
Thankfully, we know most of you are already praying, or plan to fast and pray Thursday through Friday.
But we’re asking you to REALLY PRESS IN, PRAYER WARRIORS.We need to intercede as never before for the U.S., President Trump and his family – and for Vice President Pence – agreeing together for as long as you are led by Ruach. And please also pray for ALL his cabinet, body guards, and staff! And let’s not forget those being manipulated by the elite NWO to do their dirty work! Many of these people are INNOCENT and/or ignorant that they’re being used like disposable pawns in a no-win End-Time game.
Remeber we have Spiritual Warfare Prayers at
www.withoneaccord.org
Thank you for joining us in prayer,
We love you all in Messiah Yahushua,
Dr. Bill and Mary Schnoebelen

On this Thursday, Jan. 19 broadcast of the Alex Jones Show, we look at how the Washington DC police are preparing for what is expected to be a chaotic inauguration. We’ll also look at a report aired by CNN that explained how an Obama appointee will become president if Trump is…..at the inauguration. On today’s show we’ll discuss Trump’s first actions once taking office. We’ll also take your calls during this worldwide transmission.