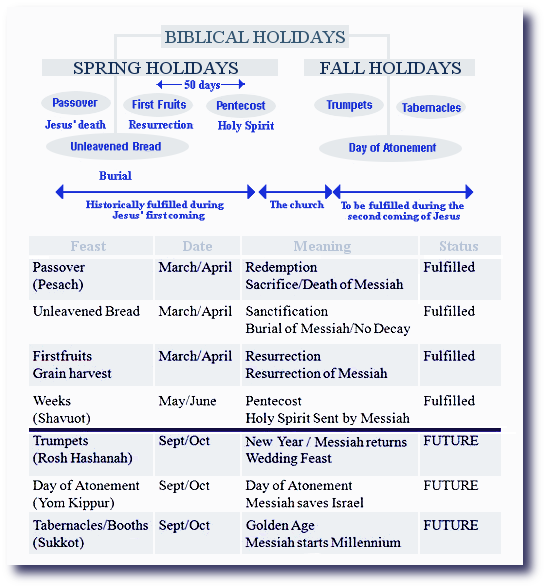 Very few Christians understand that the Biblical festivals in the Torah contain extraordinary evidence for the Christian faith.  You see, for centuries before Jesus ever came to this earth, God had His people celebrate festivals which were themselves prophecies of important events which were to take place hundreds of years later.  In this article, we will examine three examples of this.  Three times every year the Lord had His people go up to Jerusalem to celebrate a festival: Passover (Pesach), Pentecost (Shavout) and The Feast of Tabernacles (Sukkot).

Now why did God have His people go to Jerusalem every year?  It was because the prophetic fulfillment of each of these festivals was to occur in Jerusalem and the surrounding areas.

First of all, let us take a look at the Festival of Passover.  For centuries and centuries before the coming of the Messiah, God had His people go to Jerusalem and celebrate a festival which involved the sacrifice of a lamb.

Now, most Christians understand that Christ was our Passover lamb.  But it goes much deeper than that.  You see, during the very first Passover meal, God had His people put the blood of the lamb on their doorposts.

What are most doorposts made out of, even today?

And where does wood come from?

So during that very first Passover, God’s message to the people of Israel was that the blood of the lamb on the tree covered them from the wrath of God.

It is the message of the cross.

The blood of the Lamb on the tree (the cross) covered us from the wrath of God.

And when did Jesus die?

On the eve of Passover, just as the Passover lambs were being slaughtered.

Can you think of any other religion that has something like this?

No, you can’t, because there aren’t any.

There is only one true God and He given us all the evidence that we would ever need to find Him.

Secondly, let us take a look at the Feast of Pentecost.

Pentecost was the time when the people of Israel commemorated the giving of the Torah.

Once again, the Lord had His people go up to Jerusalem each and every year at a specific time.

Did the Lord do this just to be bothersome?

For what happened in Jerusalem on that exact day shortly after the Lord Jesus left this earth?

That was the day we read about in Acts chapter 2 when the Lord poured out the Holy Spirit upon the apostles and they spoke in other tongues.

You see, God always does the “big things” on His festival days.

After Jesus died and rose again, many probably wondered if the festival days were still going to have the same significance.

Well, God answered that in a big way.

On the very FIRST festival day after the ascension of Jesus, God chose to pour out His Holy Spirit on the apostles.

That was not by accident.

By doing this, God sent a very strong message that His festivals still mattered.

Lastly, let us take a look at the Feast of Tabernacles.

The Feast of Tabernacles was the 3rd time each year that God had His people travel up to the city of Jerusalem.  It was an 8 day festival where God had the people of Israel live in humble shelters or “booths” for 8 days.

Now why in the world would God have His people do that?

Once again, it was prophetic.

You see, Jesus was NOT born on December 25th.

In fact, there is nothing special about December 25th in the Scriptures at all.

Rather, most Bible scholars understand that Jesus was almost certainly born during the fall.

In the gospel of Luke there are clues that we can use to calculate the approximate time that Jesus was born.

Starting with calculating the time of the year when John the Baptist’s father served in the Temple, we can come up with a Scriptural timeline that ends in the birth of Christ.  The following video will break down all of the specific details for you:

Now, it must be noted that it cannot be proven with 100 percent certainty using the Scriptures that Jesus was born on the first day of the Feast of Tabernacles, but that seems to be the most logical conclusion when you consider all of the facts.

In addition, it would better explain why there was no room for Mary and Jospeh to stay anywhere.  Bethlehem is only about 5 miles from Jerusalem, so the entire area around Jerusalem would have been absolutely packed with visitors who had come in for the festival.

But perhaps the biggest clue is the festival itself.  You see, during the Feast of Tabernacles, God had His people live in humble temporary shelters which perfectly foreshadowed how His Son would come into the world some day.

In essence, God had His people go up to Jerusalem (which is about five miles from Bethlehem) every year, at the exact time when His Son would be born and He had them live in humble temporary shelters (“manger scenes” if you will) in order to foreshadow the circumstances of the birth of the Messiah.

Are you beginning to grasp the wonderful prophetic details contained in the Biblical festivals of the Torah?

God had His people go up to Jerusalem three times each year because one day He was going to prophetically fulfill each of those three holidays during those exact times in that exact area of the world.

What other God is able to do something like that?

Praise God for the wonderful things that He has given to us in the Scriptures!

As you read the rest of this blog, hopefully you will begin to see that there is overwhelming evidence that Christianity is true.  If you would like to ask Jesus Christ into your life and become a Christian, then we would encourage you to read this other article that we put together about how you can receive Christ into your life today: