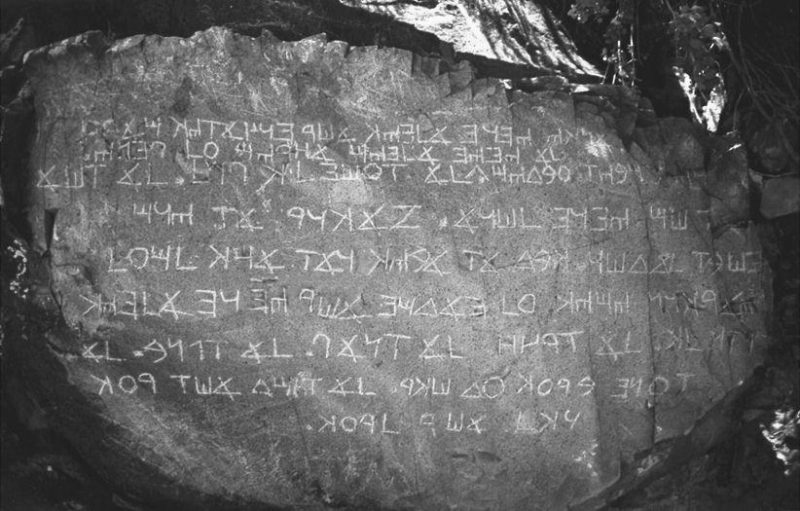 If you told most Americans that people in North America knew about the Ten Commandments long before Christopher Columbus arrived they would tell you that you are crazy.  But as we always say – it is not good to jump to conclusions.   The existence of the mysterious Los Lunas Decalogue Stone suggests that there is more to the history of America than we have been told.  The Los Lunas Decalogue Stone is a huge flat stone on the side of Hidden Mountain, near Los Lunas, New Mexico, approximately 35 miles south of Albuquerque.  This huge stone has the Ten Commandments inscribed on it in ancient paleo-Hebrew script with a few letters of ancient Greek mixed in.

In 1996, Professor James D. Tabor of the University of North Carolina – Charlotte interviewed the late Professor Frank Hibben (1910-2002), a retired University of New Mexico archaeologist. According to Tabor, Hibben was “convinced that the inscription is ancient and thus authentic. He reports that he first saw the text in 1933. At the time it was covered with lichen and patination and was hardly visible. He was taken to the site by a guide who had seen it as a boy, back in the 1880s.”

The scholars who have studied this mysterious stone date it anywhere from 500 years old to 3000 years old. That almost assuredly means that the stone pre-dates the arrival of Christopher Columbus to North America.

So how is it possible that a copy of the Ten Commandments in the ancient Hebrew language got to North America before Christopher Columbus arrived?

Perhaps the key to this mystery is in studying the Phoenicians.

The “Phoenicians” were THE great seafaring people of the ancient world. Most scholars agree that they were originally from the coastal areas of Israel and Lebanon, but they founded a vast array of settlements all around the Mediterranean during the course of their travels. In fact, the great ancient city of Carthage was founded by the Phoenicians. It is historically documented that the Phoenicians got as far as Spain, and many scholars believe that the Phoenicians eventually were able to cross the Atlantic and arrive in North America. If any ancient culture would have been able to cross the Atlantic ocean, it would have been the great seafaring Phoenician people.

So, you may ask, exactly who were the Phoenicians? The Greek historian Herodotus (484-425 A.D.) referred to the Israelites as the “Phoenicians”. It is also a fact that the ancient Hebrew language and the ancient Phoenician language were virtually identical. In addition, if you look at many maps of the ancient middle east, you will see that the great ancient Phoenician cities of Tyre and Sidon were situated just north of ancient Israel.

And did you know that the Phoenicians also founded the Etruscan civilization in Italy? Scholars have found that some of those “Phoenicians” actually brought the worship of the Lord with them:

Early 19th century noted antiquarian scholar, Sir William Betham, studied the Celtic origins of Europe, and his studies of early Italy were published in a two-volume work, “Etruria Celtica.” Betham reproduced ancient coins from the kingdom of Utruria, in Italy, known as the Etruscan civilization. Interestingly, several of the Utrurian coins discovered were minted in honor of their deity, which was none other than Yahweh, God of the Hebrews!

So just how did the 10 Commandments inscribed in the ancient Hebrew language show up in New Mexico? Nobody knows the answer for certain. But it seems that the most reasonable answer is to say that the greatest seafaring people by far of the ancient world, the “Phoenicians”, came to North America and brought the covenant of their God with them.

Some people have asked if this stone has anything to do with Mormonism, and the answer is that it most definitely does not. Mormonism is a very dangerous deception, and we need to pray that anyone trapped in the Mormon religion will wake up and find the true gospel of Jesus Christ.

What this stone does give us is a clue. It is another clue about what happened to the lost 10 tribes of Israel, known in the Bible as the northern kingdom of Israel or “Ephraim”. Just as God said in His Word, He scattered the northern kingdom literally all over the face of the earth. This stone indicates that they may have even been scattered all the way to North America.

For more information on the Los Lunas Decalogue Stone, please watch the YouTube clip posted below: